The winds are forecasted to be NE and NNE at 10 mph. How rough would South Bay be under those conditions?

I was thinking of fishing the drains and areas where it drops off in South Bay. Are there any other areas I should try?

ben_beyer wrote:I'm headed to Port Aransas on Friday. I hope to fish Saturday through Monday but my guess based on the forecast it will only be Saturday and Sunday.

The winds are forecasted to be NE and NNE at 10 mph. How rough would South Bay be under those conditions?

I was thinking of fishing the drains and areas where it drops off in South Bay. Are there any other areas I should try?

I saw you're post on on the book of faces Bite Me group, a lot of good advice. One thing I saw and it's worth repeating is it's the opening weekend of teal season. I would use caution if you're fishing within LHL as there are many blinds and the air boat traffic could be high. Be especially careful going through cuts between lakes. When paddling around duck blinds make sure there aren't decoys out and give as wide of a berth as possible.

Water levels are looking OK for LHL as long as the tides don't fall farther down, which could happen with a consistent north wind. Shallow water means smaller chop in high winds, but kayaks are displacement hulls and although they can get very shallow actually become difficult to paddle in very shallow water. There is a balance. Also, I'm not sure where you read on TKF that tides don't matter in LHL, but that is bad information. Tide levels are important because if they're too low most of LHL will be inaccessible. As it stands right now it should be OK depth wise.

The smaller sized lakes when accessing LHL from #1 is a good option. The first part has quite a bit of oyster, so be careful through there. Won't be much trout action in the lakes, but you could always make your way to the drains into the Lydia Ann Channel. Tides are falling all day so be mindful of that.

Another option is fishing East Flats over in Port Aransas. Launching from Island Moorings Marina and paddling up the Channel to the flats you can hide behind the houses and mangroves from the North winds you'll see this weekend. 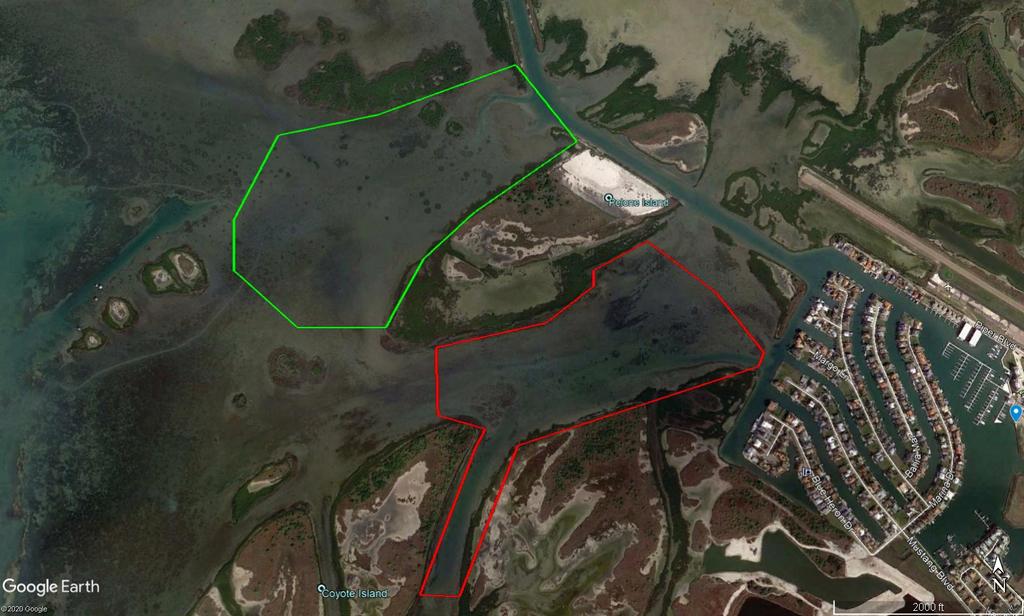 The flat in green is my favorite. You enter from drain on the north side. This would be a good spot to fish on a falling tide as it's a main drain for the area and is covered in oyster shell. There is a duck blind nearby, so check to see if anyone has decoys out. Setup drifts into Pelone Island throwing topwaters or wake baits. Water should be knee-ish deep and is mostly composed of grass with most shell in that spot near the drain on the north. From here you can access the deeper waters of East flats for trout, but you'll be more exposed and it's more paddling.

The flat in red is a good with access on the south end. There's a little more diversity in the flat. There's quite a bit of shell at the drain entrance to the south and also along the north end of it. And there's a bit more scattered shell through out. For this flat and wind after entering the flat from drain on the south (Looking at current water levels I don't believe there to be enough water to enter the "red" flat from the north side) paddle north to Pelone Island as shallow as possible and then setup drifts into the deeper water of the entrance drain/Coyote Island.

If you do a search in the Fishing Reports of this section you'll see quite a few reports from East Flats.

Please let me know if I also misinterpreted that.

ben_beyer wrote:Thanks I understand that tides do matter for water levels but from what I've read they have less effect on whether or not fish will be biting than in other bay systems.

Please let me know if I also misinterpreted that.

Moving water is important. Whether it's tidal or wind driven it's best to fish some sort of moving water. Tides in Texas are generally considered weak compared to what anglers see in the Atlantic and Pacific Oceans. Strong winds can impact Texas tides. For instances, this weekend there's strong northerly winds forecast which is going to make the predicted falling tides stronger as the northerly winds help push the water out the pass. Similarly, the strong northerly winds will prevent the incoming tide from reaching it's predicted potential.

The closer to the pass the effect isn't as noticeable, but the further you get away from a pass (say fishing Copano Bay) the winds could completely negate the tide if the winds are strong enough and the tidal movement is weak enough for this situation to happen; which it does.

I would say tides are going to be more important around the main drains into the Aransas Shrimp Boat and Lydia Ann Channels. Those spots will see the greatest influence from the tides. The farther you travel into LHL the wind will become more of factor as you get into the shallower waters. You'll have to watch the water levels or you could potentially be walking out of LHL.

Both tide and wind you'll want to find water moving around points and pinch points such as drains. With the wind find pockets on the wind blown shoreline which the bait fish will be pushed into and sort of trapped. If you can determine which way the water is flowing, cast your bait up current and work it back with it for a more natural presentation.

general rule for a kayak is anything 12 or less is doable on the flats for most people. 14-15 starts to get tiring for a lot of anglers... 17-18 on some flats with protection and low water can be doable if planned very well.. There are a few very seasoned anglers that can kayak in higher winds but after the 14-15 mph (including gusts levels) it becomes tiring for a lot of anglers.

I had a pretty good day on Saturday and started the morning by drifting across the flats throwing a She Pup. I hooked up with 5 fish but only got one to the kayak. One fish was a probably a lower slot Redfish. I almost had a 6th fish that was a nice trout but it saw the kayak when it was about to strike (mouth open and gills flared).

I then went over to the bowl and fished the drop off on the way back. Of the two grass islands to the north of the bowl, I caught the 16" trout pictured on the one to the south. I also stopped at the one furthest north and got out and did some wading due to the winds and my stakeout pole wouldn't go into the hard sand well enough to hold me in place. I tethered my kayak to me so it wouldn't go blowing across the flat. I had my Barts Bay Armor so despite the presence of many stingrays. Regardless I just shuffled my feet and avoided the taller grass since I've seen rays swimming along the tops.

I kept working my way north and caught a couple undersized trout, the 16" Red pictured and the 19.25" trout fishing the reefs where it drops off on the Northwest side of B&R.

I went back out Sunday and primarily fished the reefs on the Northwest side of B&R. I caught 2 undersized trout and then some Dolphins showed up. When I had checked the weather that morning, Thunderstorms were supposed to start aroun 3PM and the winds were blowing pretty good so I called it quits between 9:30 and 10.

All of my fish after fishing the topwater first thing in the morning either came on a 1/8 ounce jighead with a Saltwater Assassin Sea Shad in Butt Naked or a 1/4 ounce silver spoon.

I hope to fish LHL on the next trip because I've been wanting to go in there. But I try to avoid crowds and fishing on Saturday's due to crowds. I'll also have to check water levels because I don't want to get stuck like I almost did when I tried Saint Mary's Bayou in East Matagorda.

I'm also interested in exploring the backside of the Marina too. What wake baits work back there?

ben_beyer wrote:I'm also interested in exploring the backside of the Marina too. What wake baits work back there?

Thanks for the report and pictures.

I think it was good call to let the duck hunters hunt. We can fish year round, they only get a relatively small window. Plus, there's plenty of waters to fish away from where they like to hunt.

I'm not sure which marina you're referring to, but if it's Island Moorings I've had success on a couple brands of wakebaits. My primary wakebait is the Bandit Footloose in Chrome/Blue Back. I can work it as a wakebait or down to about 16". Though they've either discontinued the color or are having a hard time importing them right now. Another good one, although pretty expensive, is the Strike Pro Hunchback (the smaller size). This is a true wakebait and one I give to family and friends to throw when walking-the-dog is outside their repertoire. Again, the Chrome/Blue Back or Chrome/Black Back. Two other popular wakebaits/very shallow running crankbaits are the Mann's Baby 1-Minus and the 6th Sense 80 WK Wakebait. I really like the size of the Baby 1-minus, so if they ever discontinue the Footloose I'll give those a try. The 6th Sense are a little long for my liking, but again, pretty popular wakebait on the Texas coast.

Thanks for the heads up on the wake baits. I'll look at picking a few up to try out.

ben_beyer wrote:Hew Neumie, on those wakebaits, do you change out the hooks to singles to help with keeping grass off of the lure or do you just leave the trebles on?

I have a superstition with my hardbaits on the water; I always carry three of each color. So 3 silver mullet spook jr., 3 spectrum spook jrs, 3 footlooses, etc... Of those I keep two with treble hooks and one is rigged with singles for heavy grass. I know a lot of people claim their hook-up rate is no different between trebles and singles, but I don't have that same confidence in my hook-up ratio on single hooks. So, I throw trebles unless the floating grass is too thick, then I'll tie on my single hook version of what ever I'm throwing.

Definitely a fly when they are on small glass min[…]

I am looking for a spinning reel that will last a […]