By Yakety_Yak -  Mon Sep 07, 2020 11:19 pm
-  Mon Sep 07, 2020 11:19 pm #2309164
This report is a two-part report. This report will be about the Saturday outing out at PINS. My next report will be the next day when the Bob Hall Pier outing takes place. BTW.... I do apologize because it has taken me so long to get these reports out. After having to go to Texarkana, AR to make sure some family was taken care of from Hurricane Laura, I had to go back up there again as there was a family emergency that I was dealing with. I just got back in Houston and was able to finish off the first part of the report. As always, my reports are a bit lengthy so grab a beer, sit back, relax, and get ready for a fun fishing report!

My buddy Nathan has a Dodge Ram 1500 4x4 and that was the choice of vehicle we used for this trip. Nathan is a good friend of mine and I wanted to put him on kings for his first offshore trip. He decided to hook up with me to get the full experience of offshore kayak fishing. Mike rode with us as well. Mike has fished with me offshore quite a few times so this type of fishing is not new to him. All three of us drove down to meet another guy that I know of named Kyle. Before that, let's rewind to the beginning.

Around 3:30 pm Friday Nathan pulls up to my place. I load his kayak on my trailer and strap it down while he is loading all my stuff up on the back of my SUV onto his truck. After I attach my trailer onto his truck, I go to park my vehicle and away we went. Now we are headed to Mike's place to meet with him. Once we arrive, Nathan loads Mike's stuff on the truck while Mike and I load the other yak on the trailer. While I am strapping the yak down, Mike goes to help Nathan finish loading things into the bed of his truck. 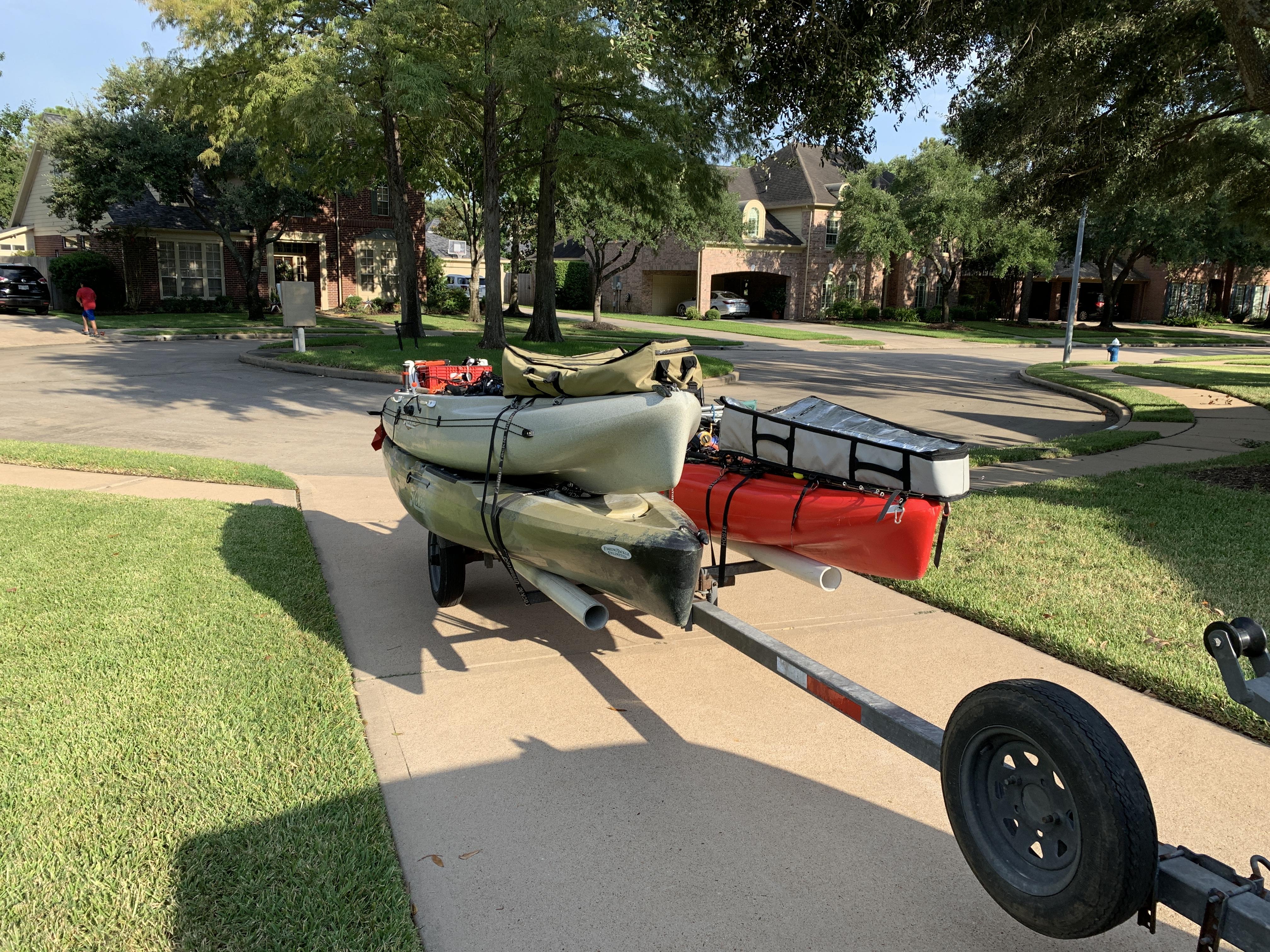 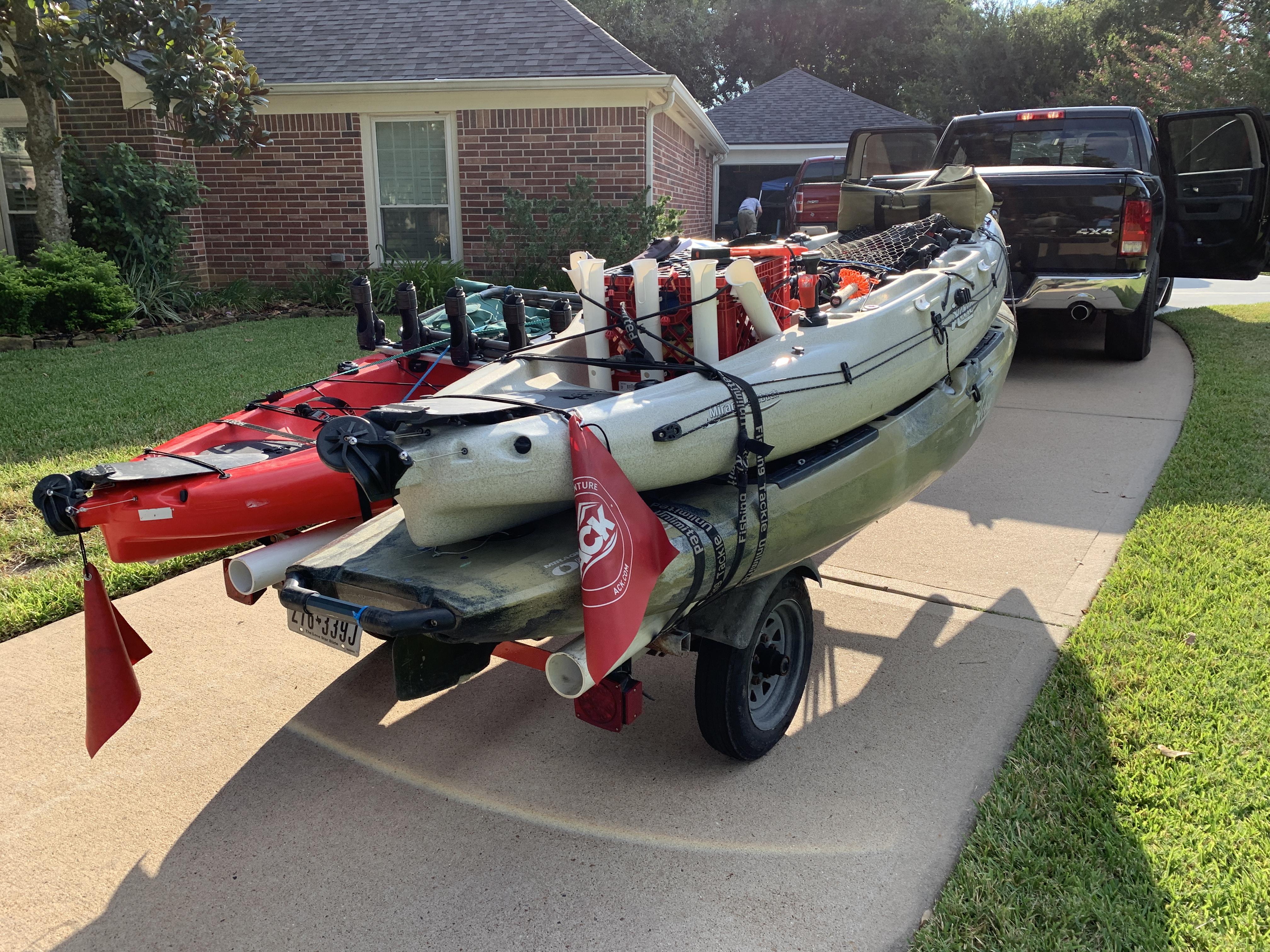 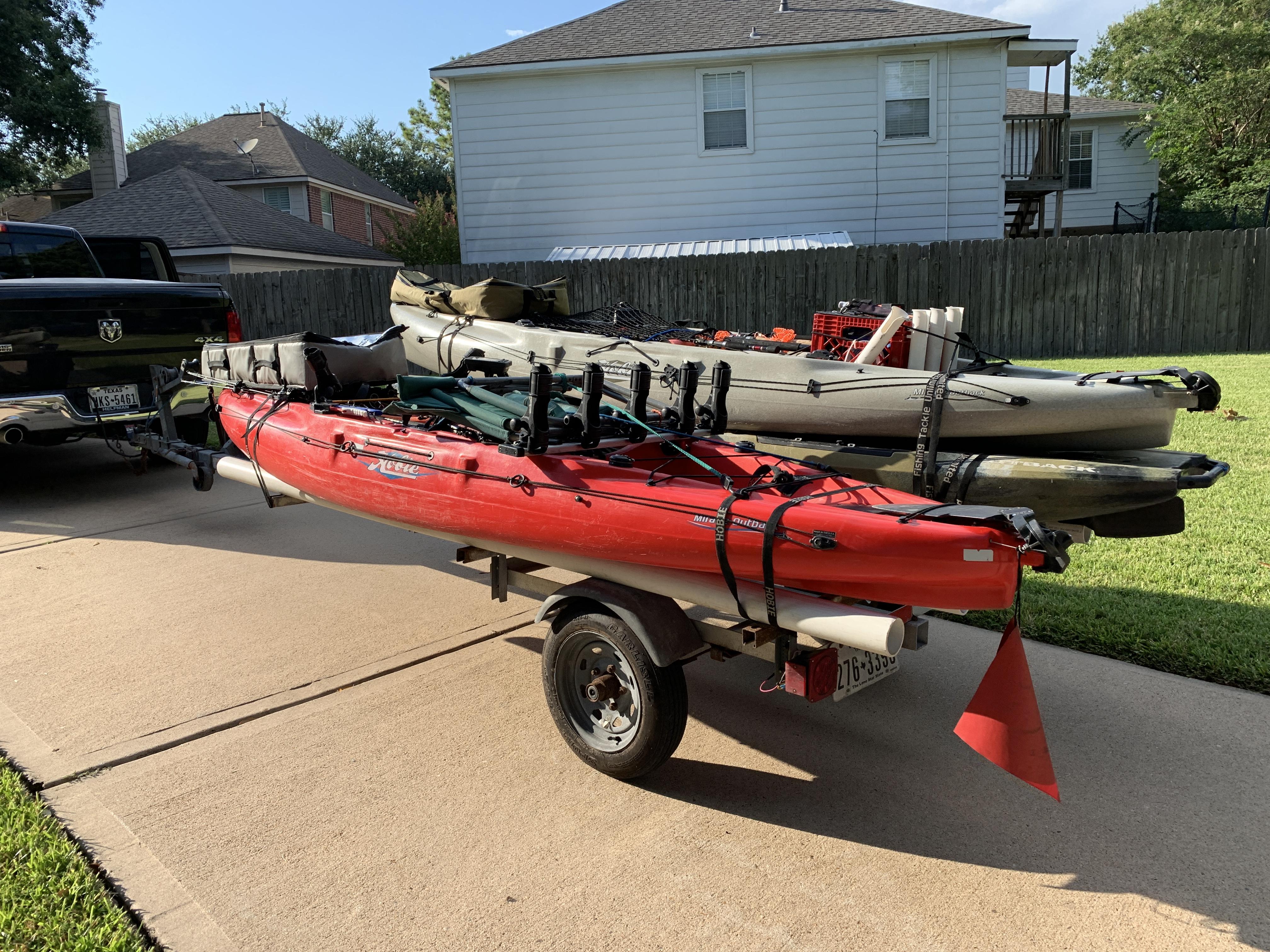 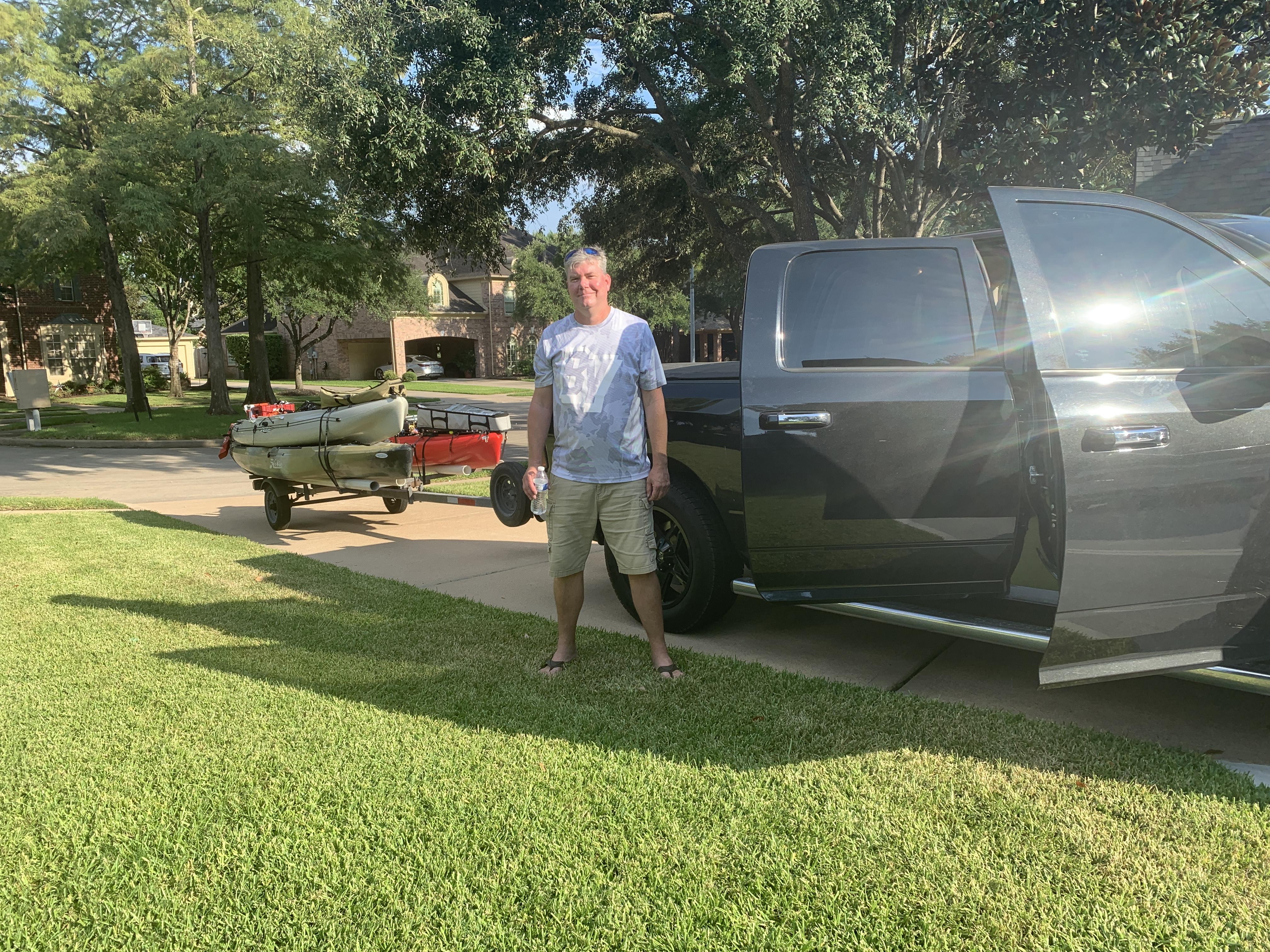 Now that things are all loaded, it was time to hit the road. The first stop we needed to make is the Buc-ee's in Wharton, Texas. 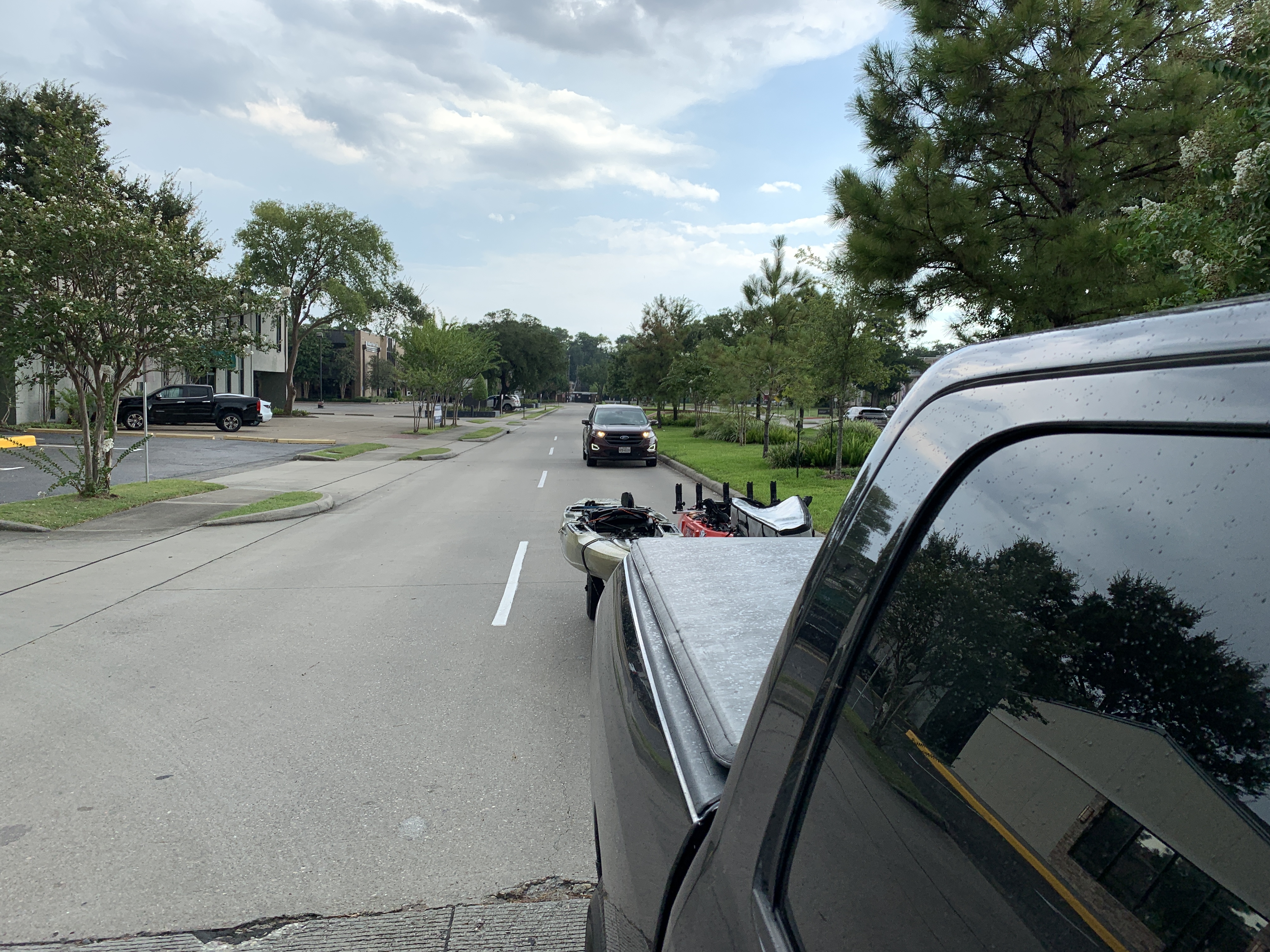 After taking the toll road to get to Hwy 59, we made our way on over to Buc-ee's. Once we arrived, we went to the restroom, grabbed some dinner, and picked up a couple of bags of ice to throw in the coolers until we got to Corpus. The ice is just to keep the cooler cooled down so that the main bags of ice we put in there stay cold and not melt so fast. Sometimes I will use frozen water bottles but I didn't have anything frozen at the moment so Buc-ee's ice was the ticket for this time.

Now we are back on the road. Nathan filled up with gas before leaving Houston so we didn't need gas at all. The drive went smoothly making it all the way to Corpus with no issues whatsoever. Even going through Corpus was smooth. There wasn't much traffic so that made for a quick run to arriving on the island fairly quick. Once we arrived on the island, the first thing we did was pull over to a mobile ice station. The ice is usually cheaper here than the gas stations but they have raised their prices to almost be as expensive as the gas stations. I used to go there strictly because of how cheap the ice was but now I am almost wondering if it's just not easier to pay the small extra and not have to do the extra stop. This way I can get my ice at the place we fill up at for gas. Since the prices of this mobile ice station has gone up substantially, I will not mention where it is. Just know that you are no better or worse off by going to the gas station for your ice for now. If something changes, I will let you guys know. While we were at this ice station, we met up with Kyle. Kyle followed us the rest of the way to our destination. After we stock up on about 6 - 8 bags of ice, each 20 lbs., we head over to a Stripes gas station to get a beach pass for the Bob Hall Pier outing in a few days and to fill up with gas.

Now that everyone is fully ready to go, we make our way on out to PINS to an undisclosed location far, far away (I hope you liked the Star Wars reference, lol). We are headed to meet another Mike and Prof. Salt. Kevin was there, which I have not seen in a long time. It was great to see Kevin! Everyone was asleep by the time we arrived. As usual, 4wd vehicles are a necessity when going down PINS. I would not even suggest AWD. If you get stuck and have to get a tow truck out there, it's around $600 - $800 to get your vehicle towed out and back off of the beach. The other issue you have to deal with out on PINS is that there is not any cellular access. Once we arrive to our destination, we start to get the kayaks ready. Once that is done, we all get ready to retire for the night. Nathan and Mike sleep in tents. I turn on the truck and sleep in A/C.

Glenn and Mike hit the water before us. We would meet up with them out on the water eventually. Finally, it's time to hit the water. Kyle is riding in a Hobie PA 14, Mike is in a Hobie Outback, Nathan is in a Hobie Outback, and I am in a Hobie Outback. We all drag the kayaks in the water and proceed to go through the surf. I usually go through the surf with paddles instead of peddles (to avoid hitting the sand bars with my fins). Once I was through the surf, I dropped my rudder and fins. I peddled a small bit more to ensure I would not drift back in the surf zone. This would also give me enough time to get things set up on my yak for fishing. Kyle and Nathan were pretty much next to each other going through the surf. Once through the surf zone, I hear Nathan on the radio mention he had lost a fin on his mirage drive. I couldn't believe what I was hearing so I asked him to repeat. He said the same thing. The interesting thing was that I had finally fixed my mirage drive to my Outback back in Houston before heading to Corpus as I was using one of the drives from my Hobie Tandem Island. I wanted to be sure that if the drive did mess up I had a way to continue fishing. In turn, I took an extra mirage drive with me on this trip as an added precaution. I told Nathan to go back through the surf and use the extra set I brought. Once Nathan got the extra mirage drive from the truck, he made his way back out the surf. I waited for Nathan and told Kyle and Mike to start fishing. Nathan and I would meet up with them on the water shortly.

Now that Nathan is through the surf, he's getting ready to fish. I'm ready so I am waiting patiently for Nathan to get rigged up as well. 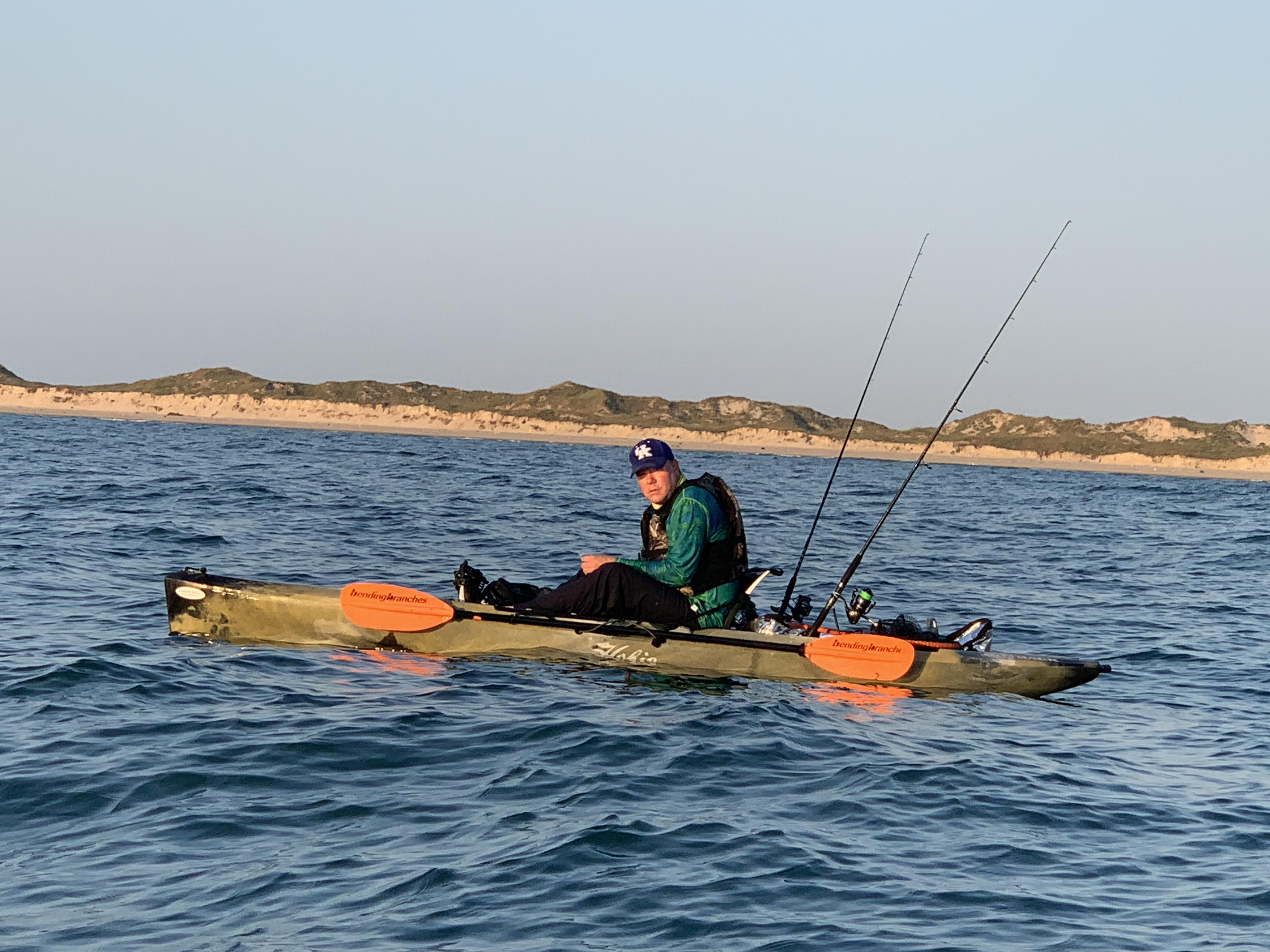 As Nathan and I are trolling, working our way to the others, Nathan ends up getting onto his first fish. The line is running and Nathan is on his way to catching his first king fish. After a good run and the fight you would expect from a king, Nathan lands a king for the first time. 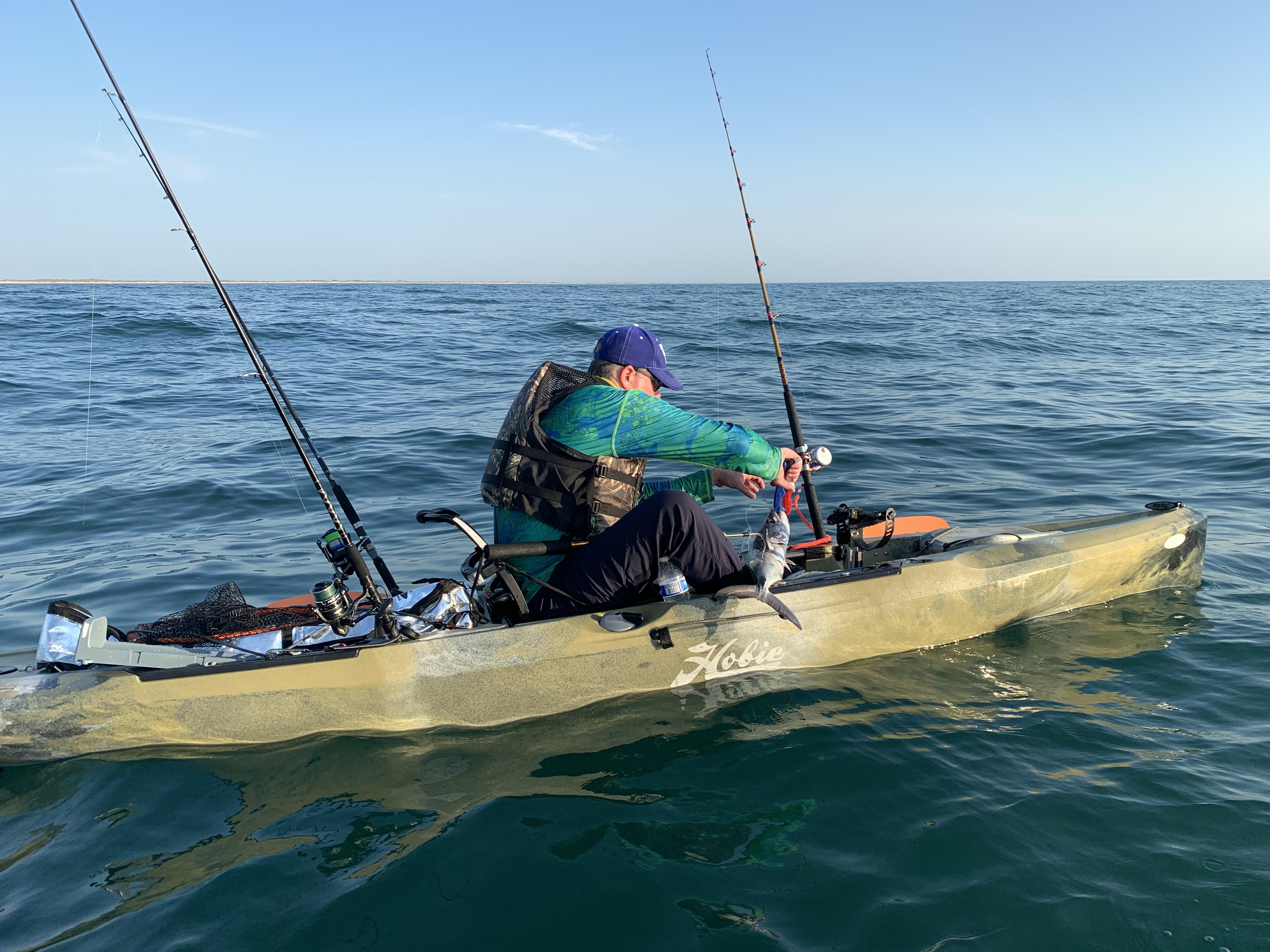 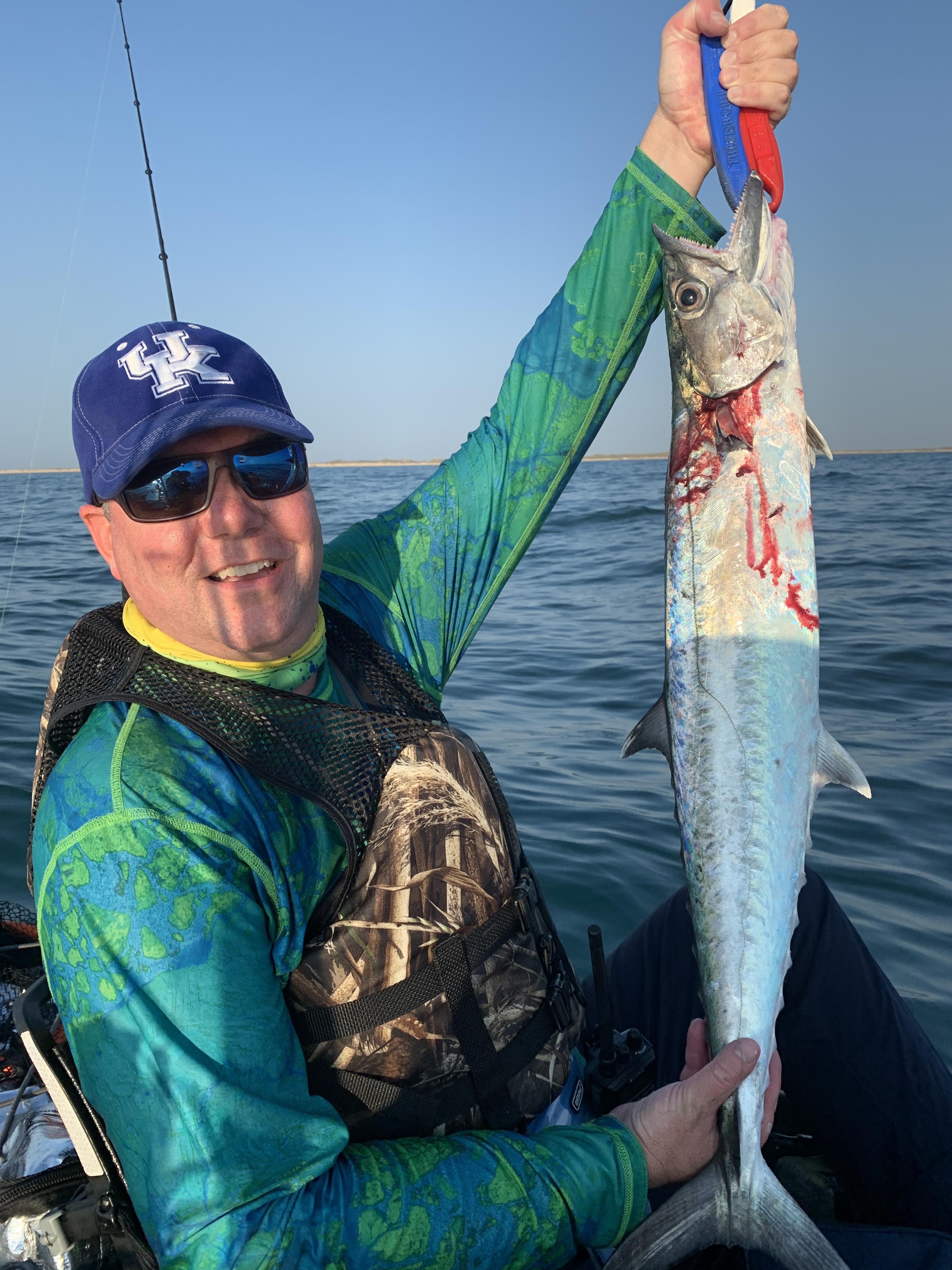 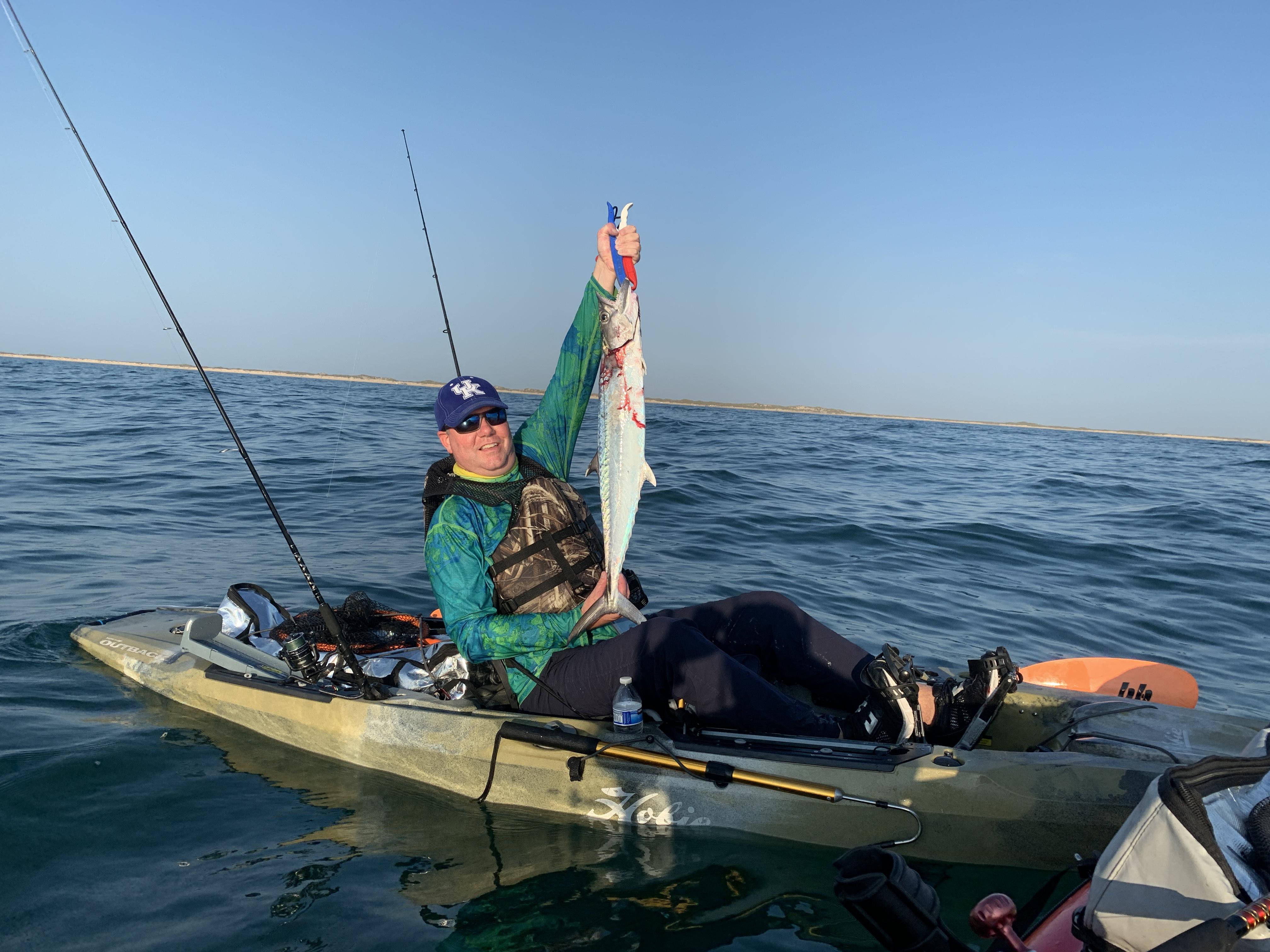 Now that Nathan has a taste of what catching a king fish is like, I think he's hooked! Now we are back to fishing. As I am dropping a line back in the water, my reel starts screaming. I now I have a fish on the line. Just to let you guys know, the kings this day were crazy insane! 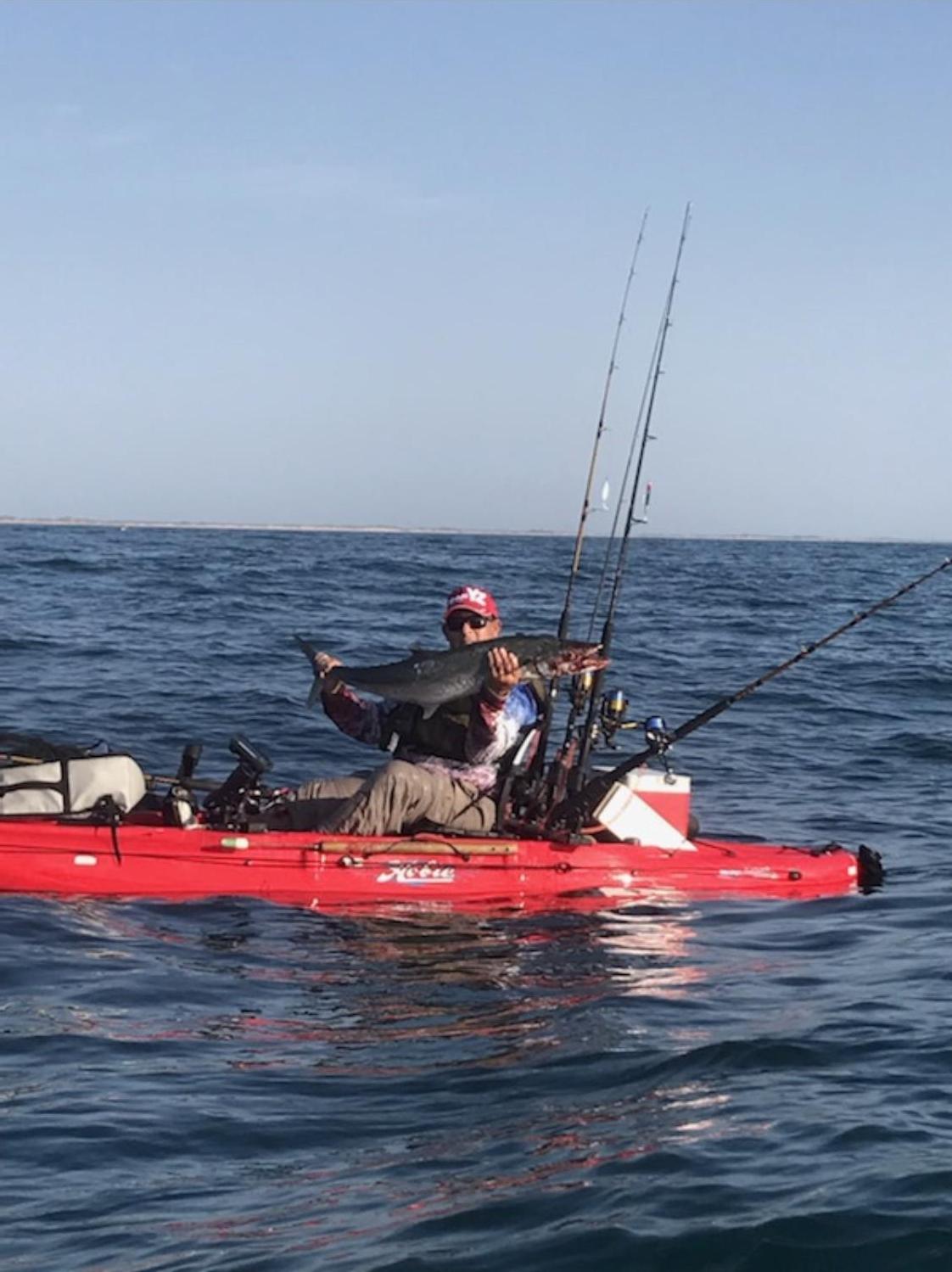 Now that I have my king in the bag, Nathan ups his game and is hooked up again. 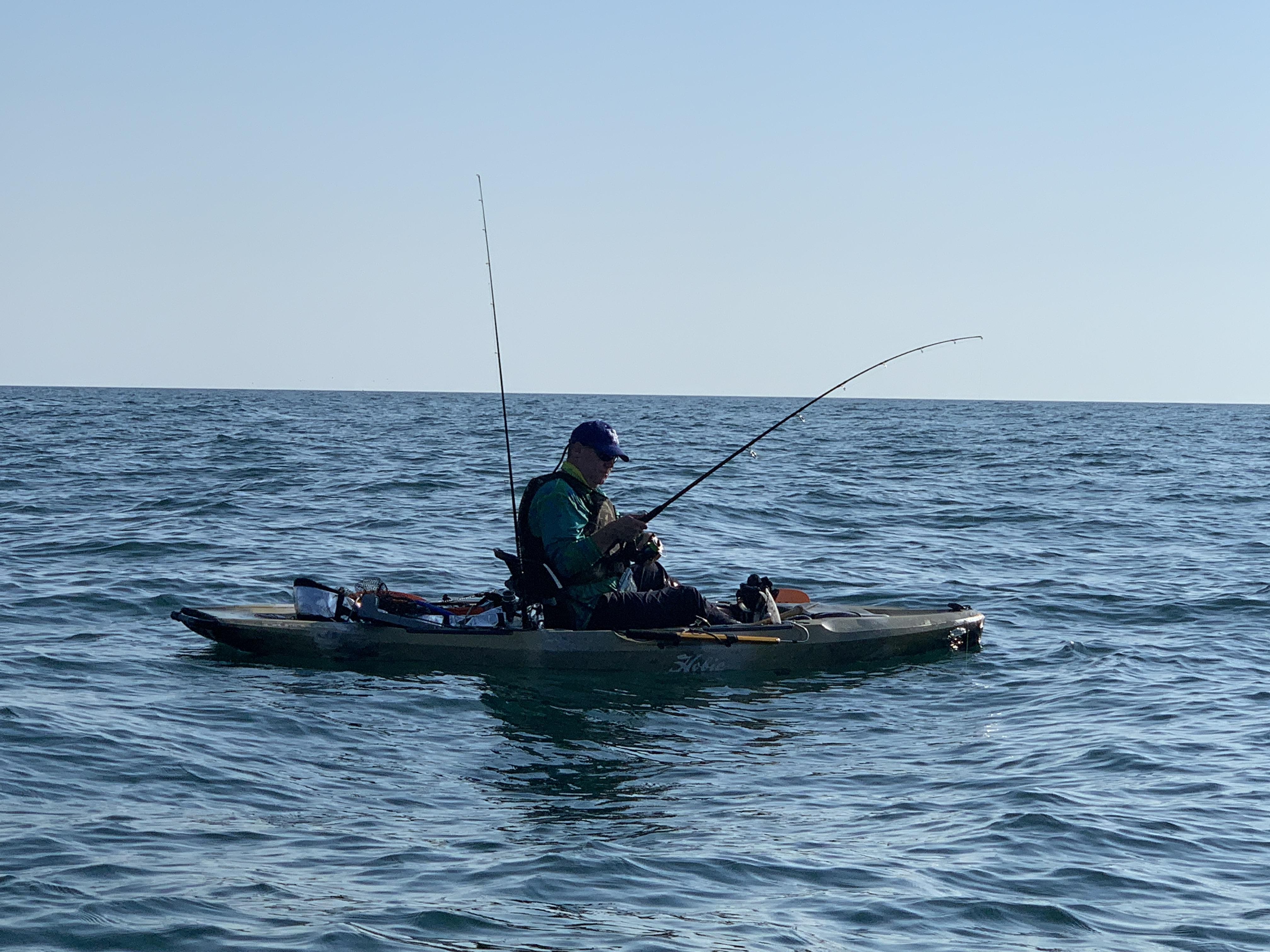 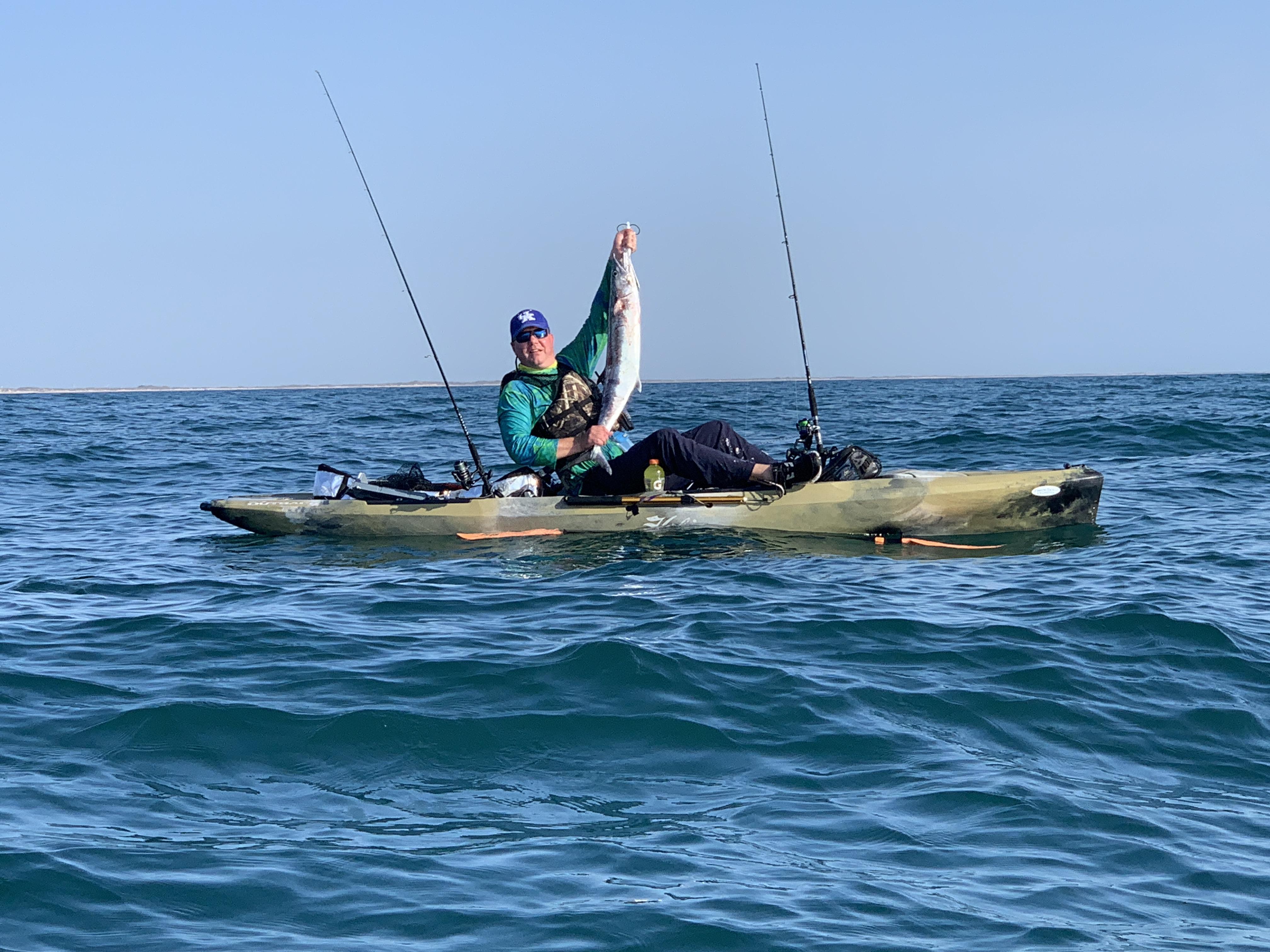 After Nathan landed this king, he rigged up and trolled again. Within no time, Nathan was hooked up once more! It turns out that Nathan is a natural at catching and landing kings. WTG Nathan!! I had a video of this catch, but the file was too large to post so no video this go around. No worries, I did manage a few pics.... 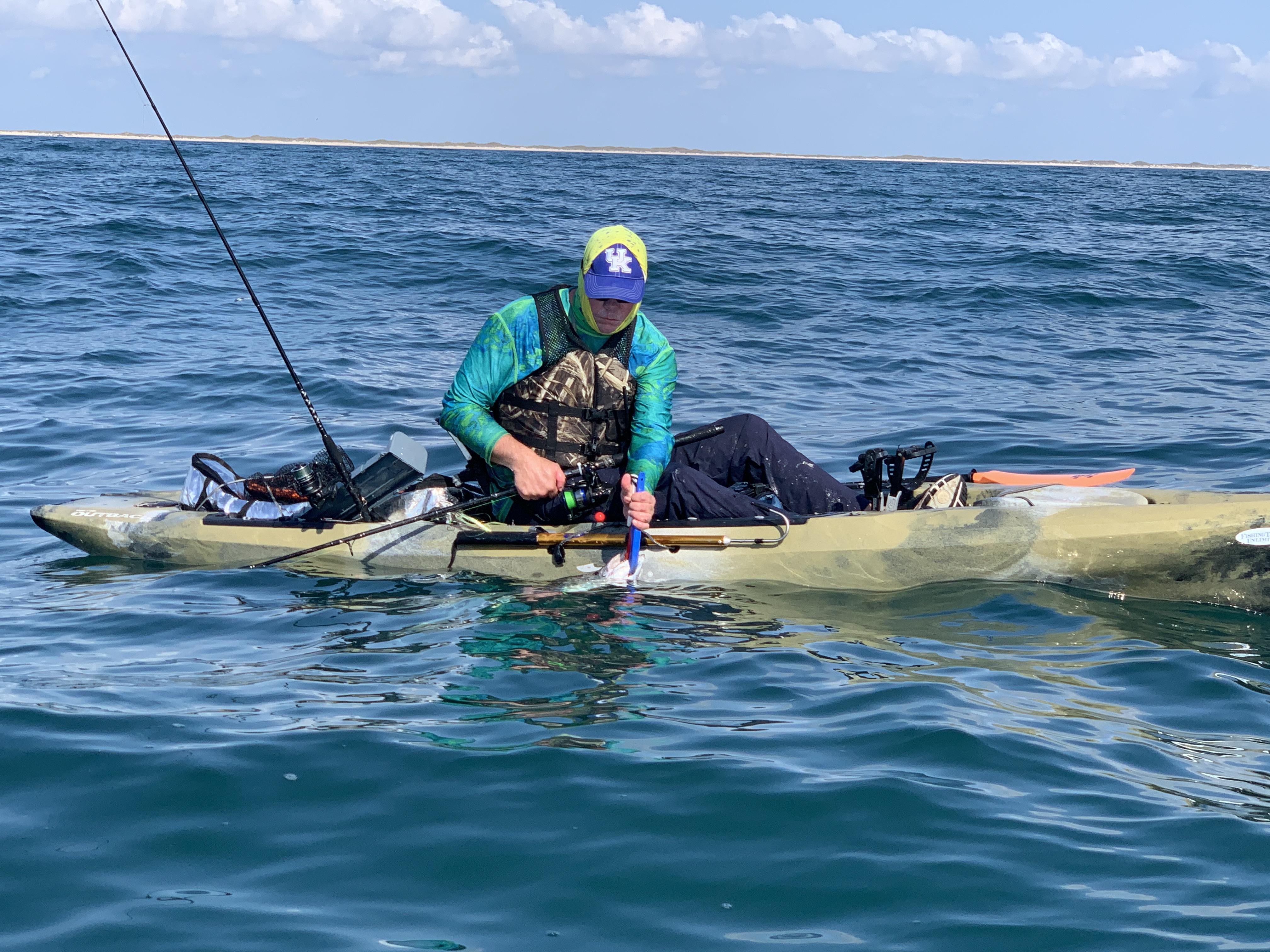 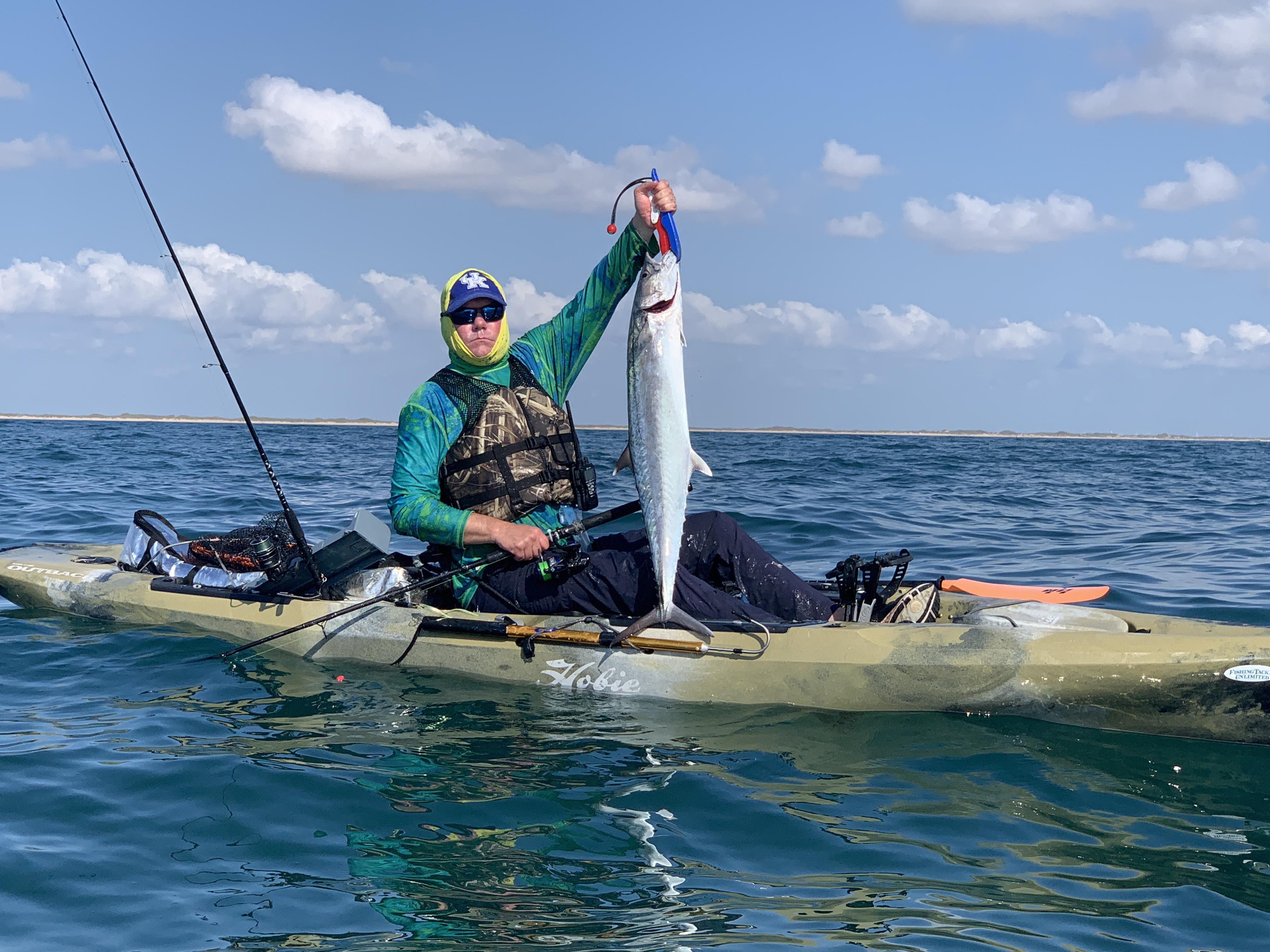 Finally, Nathan and I catch up to the others. Everyone has been catching kings the entire time, sometimes doubles!

I didn't get any pics/videos of the other people fishing this day unfortunately. If you want to see Prof. Salt, you can check out his YouTube channel by putting Glenn Madden in the search engine for YouTube. If you like watching king fish being caught from a kayak, he will definitely keep you on your toes in his videos. The guy knows how to catch kings!

Now that we are back on shore, we decide to take a few pics before cleaning our fish. 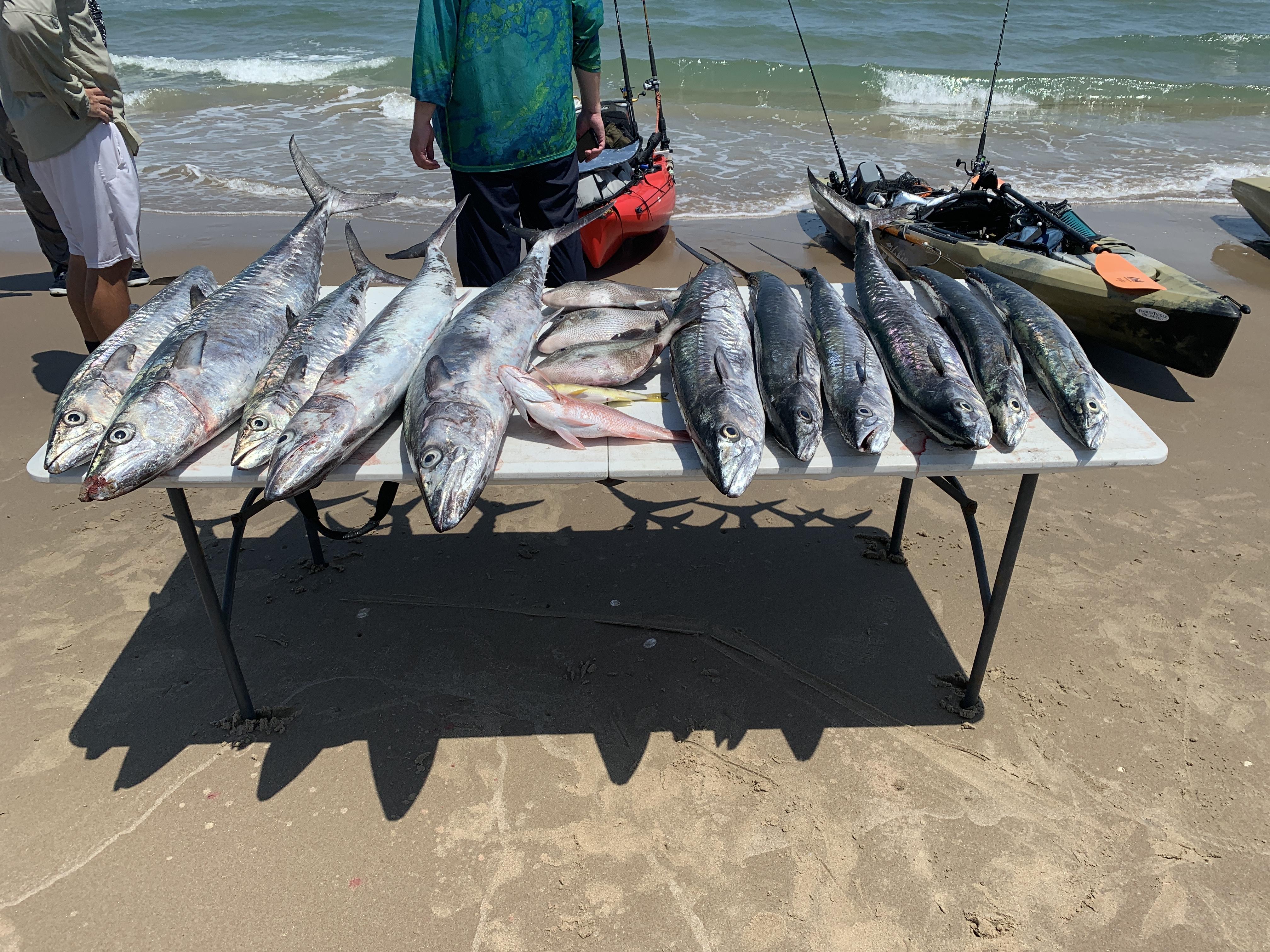 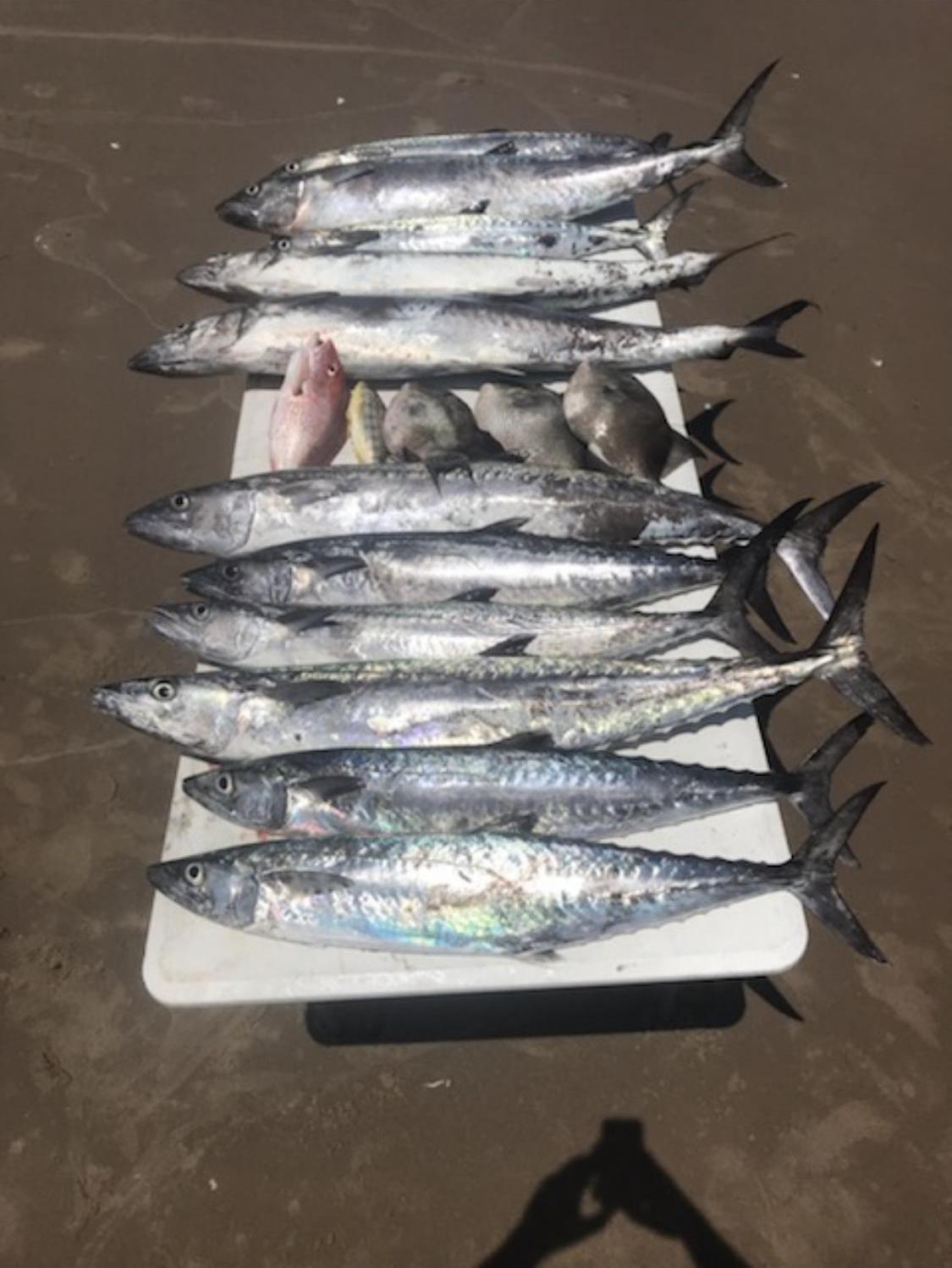 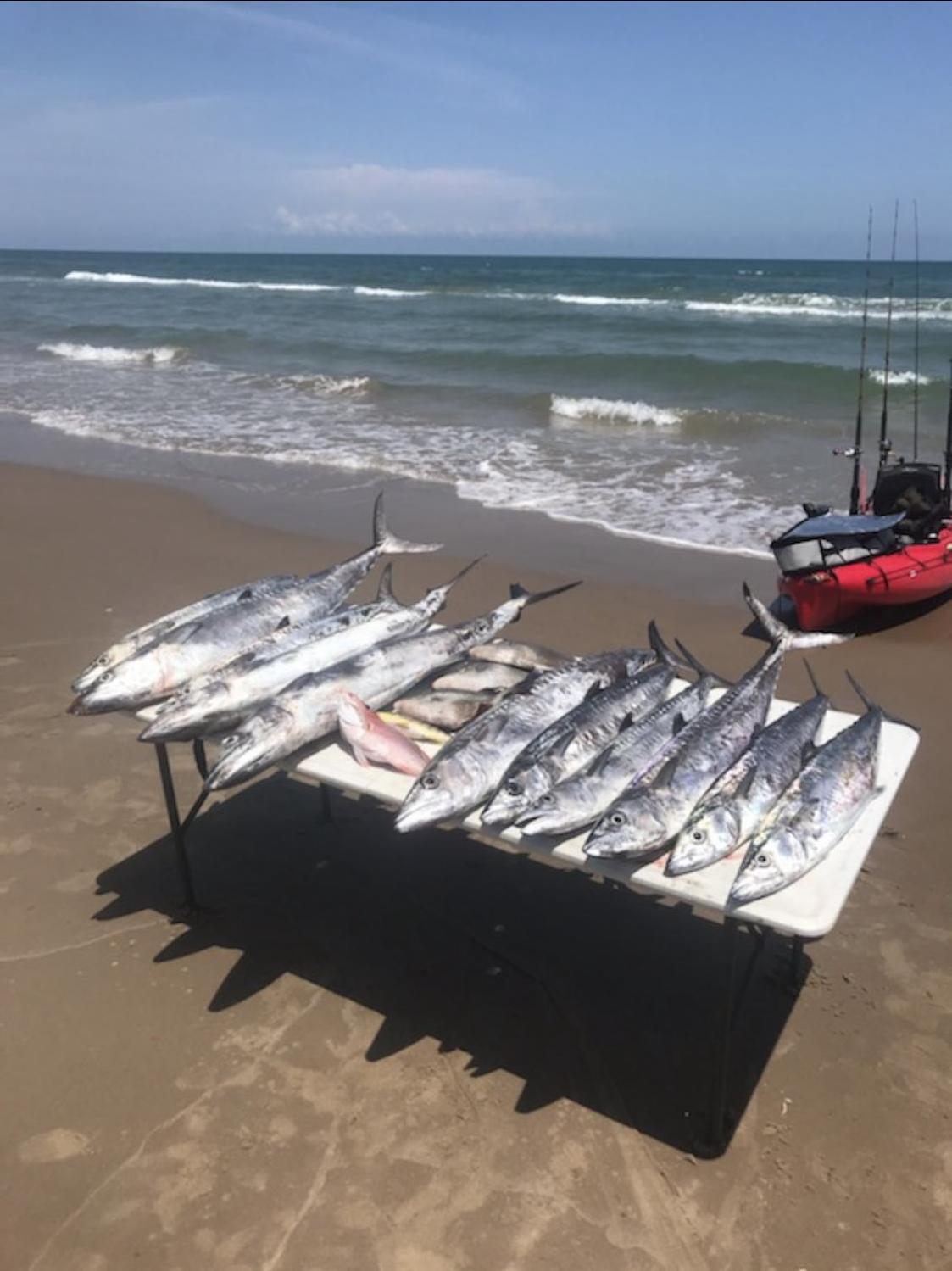 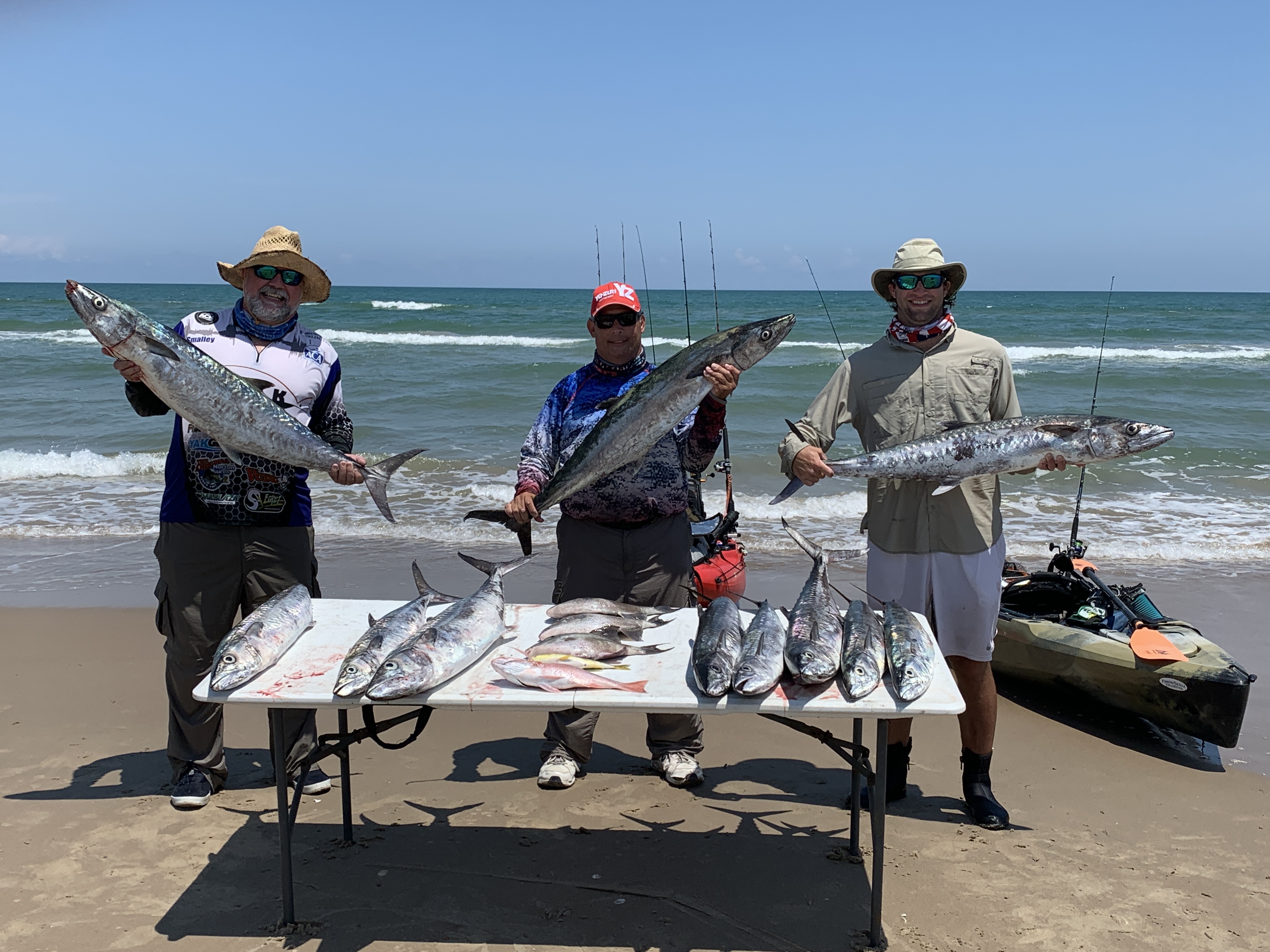 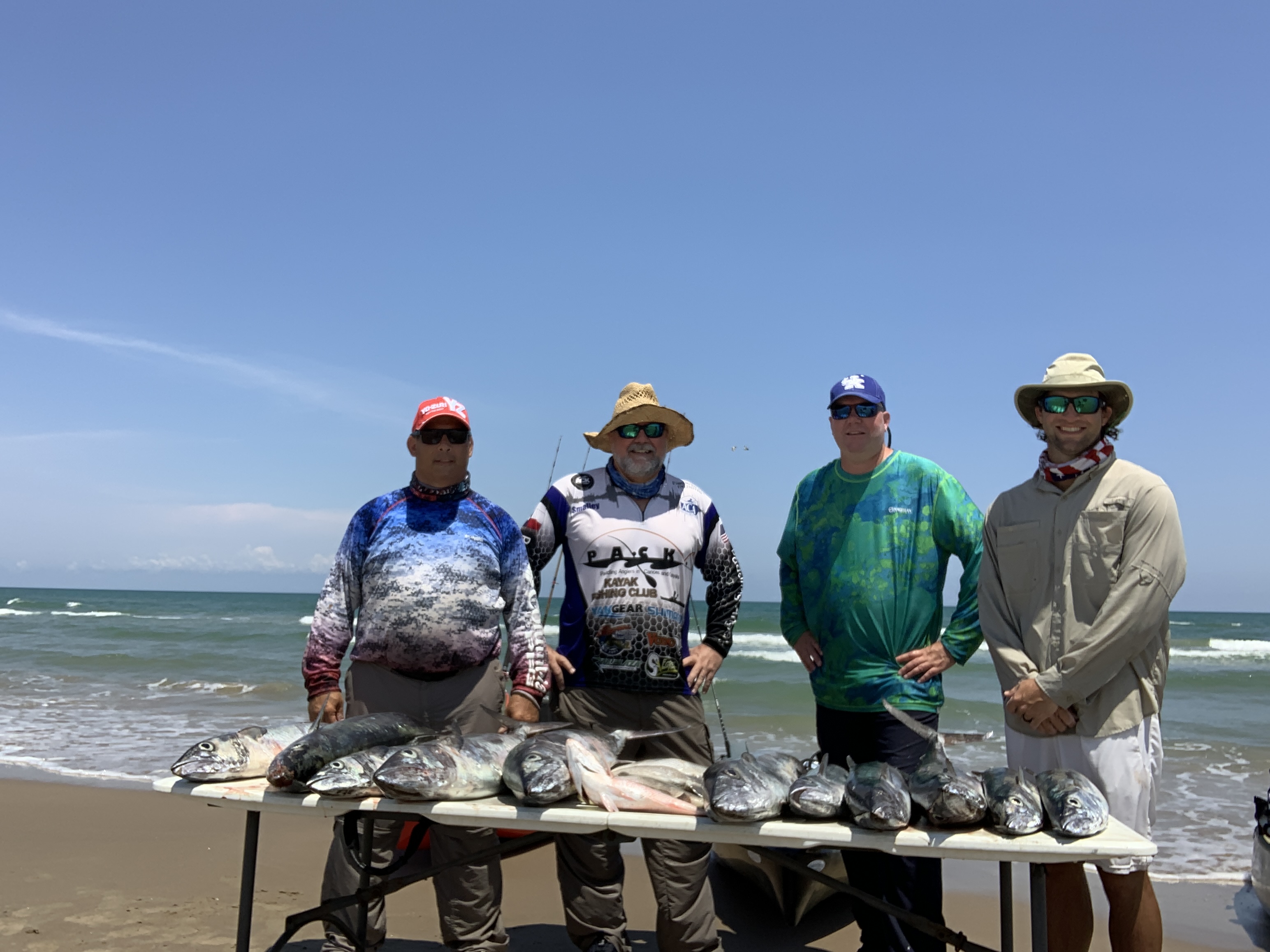 Now that all the pics have been taken and the fish have been cut up, it was time to pack up the yaks and gear then head back off of the beach. 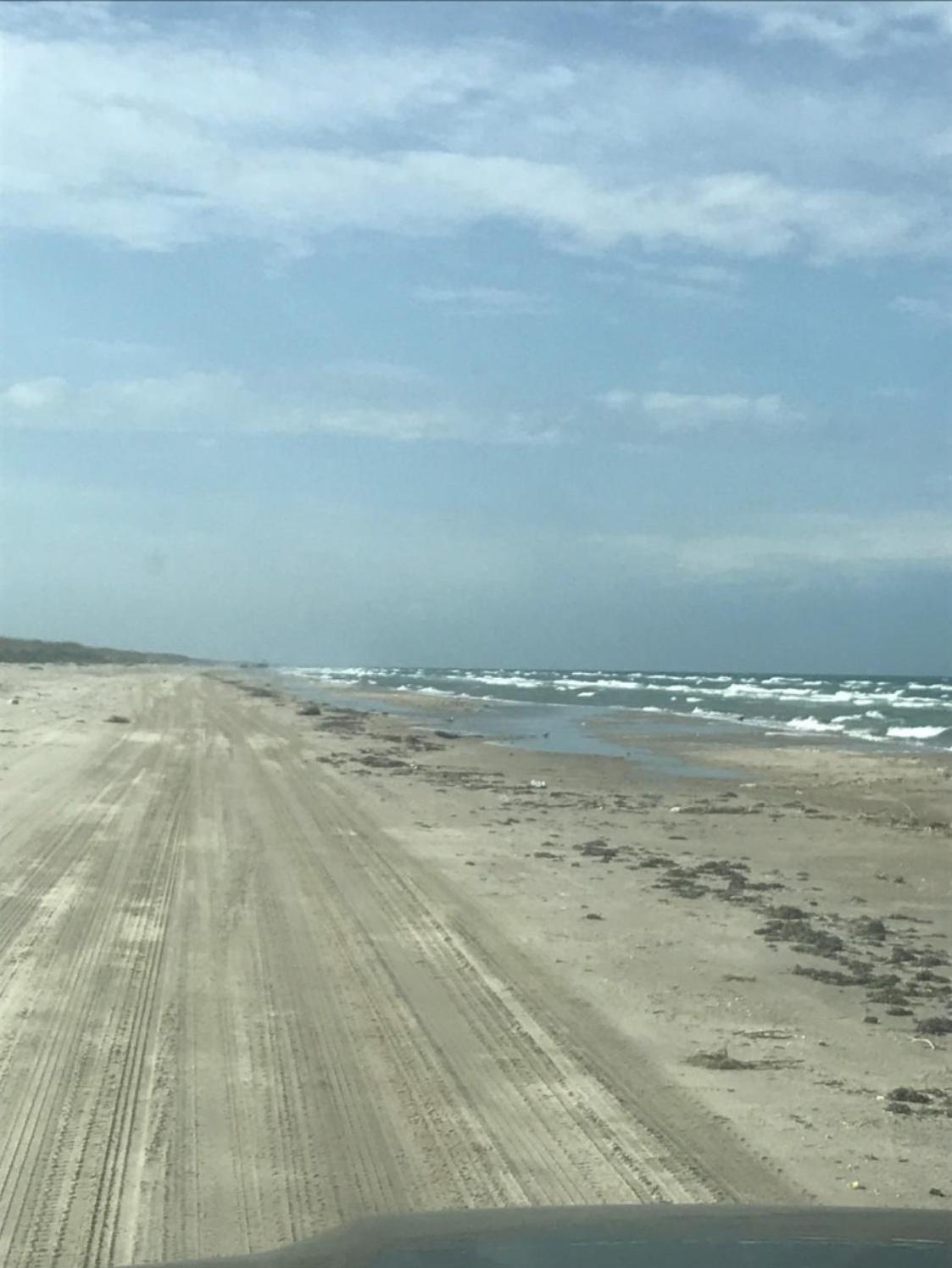 kickingback wrote:Wow! Awesome day of BTB! Glad y'all had a good haul and better time. Looks like a nice weather and wave day too. Congrats on first offshore and good work Yakity for taking them all out and doing well!

Thanks. It was definitely a fun day!

) Really great haul and nice kings.
Pfun Photos.
I should have been there, it was my birthday, but I was at home with a key lime pie my mother made for me.

) Really great haul and nice kings.
Pfun Photos.
I should have been there, it was my birthday, but I was at home with a key lime pie my mother made for me.

Ron, I didn't know you did offshore kayak fishing. Let me know if you want to go sometimes. Also, if you are doing a inshore trip, hit me up. We are past due for one of those.

Killerbee wrote:Enjoyed that Blake....I m headed to pins this week. Call me

Good talking with you the other day. Let's see if we can hook up soon.

My pleasure, I am glad you enjoyed. Let's hook up sometimes for a trip.

Mellow-Yellow wrote:Nice Blake, Man you guys did slay them on that Saturday.

That was a insane day. It was definitely a fun one!!

Reply
Return to “BTB (Beyond The Breakers)”
24 Oct

Thanks, Tombo! I like his style of video. He tell[…]