This was trip organized by Todd and he and Dale stayed one extra night, I pulled off on Sunday the stayed a few miles up from the take out Sunday night.


Nov 2:
We all arrived at the put in unloaded then Todd and I made the drive to the outfitter in Silsbee. Left our vehicles on their property then they drove us back to the put in. I think we finally got on the water about 1pm. The flow was quite nice and clarity, well it is east Texas. Todd spotted a 4-5 gator slipping into the river just ahead of us within the first mile of paddling. There were no other boats on the river and it would be another 2+ days before we saw any boats or people. This section of river does not see a lot of traffic and therefore there is very little trash. We only paddled about 6.7 miles the called it a day about 3pm on river left. We found a nice sandbar with good shade, firewood and a place to hang my hammock. On the paddle we could see how high the water got during hurricane Harvey. There were a lot of downed trees along the edge but the sandbars had been refurbished with fresh layers of white sand and plenty of firewood.


The appetizers and bar opened up about 4:30 and Todd cooked some mighty fine steaks for dinner and a cobbler for dessert. We sat around the fire for a bit, I fell asleep in my chair then got up later and found my way to my hammock. It was a near full moon and very bright out that night.


Nov 3:
I was up at my usual early time and made me some coffee then sat and watched the stars and the moon set. Once Todd and Dale were up I cooked bacon and eggs for all of us. We got on the water about 10am with no particular hurry for the day. I was amazed that we did not see any hogs along the river or deer. Opening day was the next morning so we expected to encounter hunters along the river getting setup for the next morning, but saw no one. We made a nice stop for lunch and I fished a little and caught a large mouth at the confluence of a creek. About 3pm we found a nice sandbar on river left with plenty of shade courtesy of large willows and plenty of firewood, total for the day was about 15 miles. Once again the appetizers and bar were up and running once we had our camp setup, firewood collected. I cooked King Ranch Chicken in my 10” Dutch Oven and Todd made another great cobbler. Once again I feel asleep in my chair next to fire but did awake about 10:30 to rejoin the campfire conversation. After a bit I made my way to my hammock and again it was very bright out with the moon. After about an hour I was awoke by a good group of howling coyotes just a bit downriver from us.

Nov 4:
Another beautiful day to wake up to a bright moon with fast moving clouds making it look like someone was spot lighting the river. Once again I cooked bacon and eggs and a round of toast for everyone and we packed up and were on the water by about 9:15. The night had been very warm with lows in the upper 60s and the day was warm. I made several stops to take a dip in the river. This river has many bends in it for long distances which provide for ample sand bars. There are however some relatively straight stretches with no sandbars but those usually no more than a couple of miles long.

We paddled another total of 15-17 miles for the day and after turning down a couple of potential campsites we found on river right with shade and firewood and room for us to spread out. Just upstream from our campsite there was an 8ft gator lying on a log. I thought he looked a bit strange so I paddle in for closer inspection. I thought surely as I approached he would slip into the river. Then I saw his head lying just in the water and the log was bouncing from the current. Gators do not do this; he was no longer among the living. Once I go downwind I confirmed from the stench.

I did not set up a hammock and there really were not good trees without being up in the brush and mosquitos. I just put down a tarp on the sand and called it good for the night as there was no rain in the forecast. Also, I wanted to be on the river by 5am the next morning as I was going to finish out and get home. Todd and Dale would take out on Monday. Of course the bar and appetizers broke out quickly and Dale cooked a great Dutch Oven chicken casserole.

Nov 5:
I got up about 4am and had a cup of coffee a cliff bar then packed up and got on the river by 5am. The mood was very bright so no issue seeing logs in the river although there were some patches of fog which made things a bit more interesting. I did not hit any logs but got very close a couple of times. There were several river cabins that were obviously occupied as there were multiple flat bottoms and generators running. I eased on down river then just after daylight I had one boat with father and son headed up river. I passed by another father son just entering the forest for some deer hunting. They waived and I also but kept quiet.

At about mile 50 I came upon some faster water and hard turn to the right with a lot of logs in the river. Sure glad it was daylight as paddling through here in the dark would have presented a near certain collision and you know what can happen after that. Then on just another mile or so was the Hardin County Park on river right. I did not stop but word and pictures from Todd is that this is a very nice facility. Supposedly you can camp there but we were told by the EastTex shuttle driver not to as there are two legged creature that might present you a problem in the dark of night. About a mile or so before the hwy 96 bridge I saw a family of otters (5-6) chasing fish.

I made the Hwy 96 boat ramp right at 10am and covered about 21 miles and marked a total distance for the trip of 57 miles, EastTex says it is 54 miles though.

Trip Summary:
This is a nice river with plenty of camping and firewood with few people and trash. The water is not clear but again it is east Texas. I had no problem filtering water from the river but did need to back flush after every 2L bag. There are no take outs until the Hardin Co Park so if you are going to paddle this river you are committed for at least 50 miles. If I come again it will come in some colder days as the mosquitos were thick at times but manageable. This would be a good trip for larger groups as there are many large sandbars.
Here are a few pictures and a tracking map from my Delorme InReach. 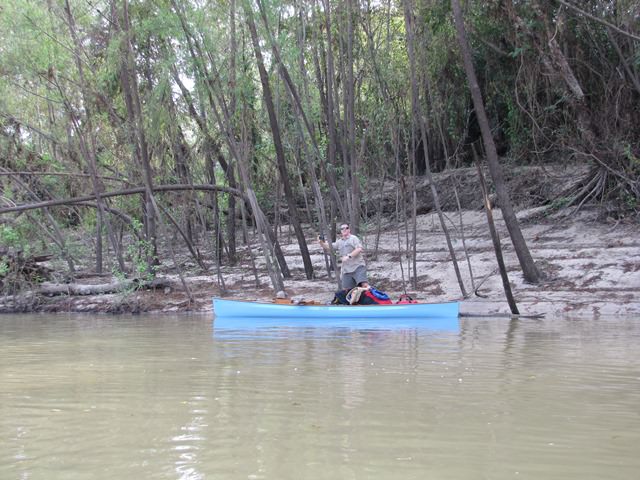 Todd at put in 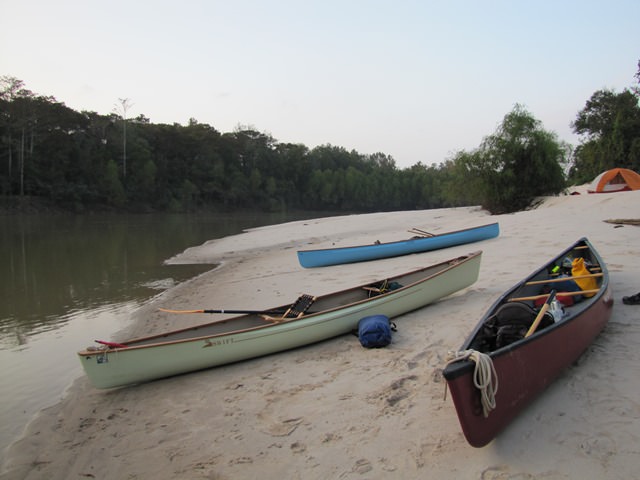 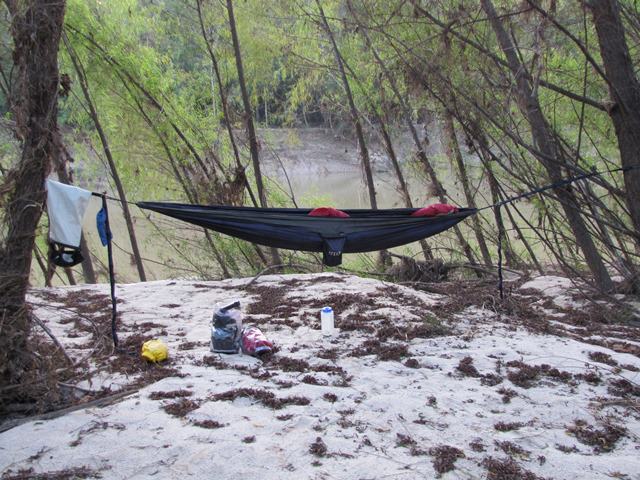 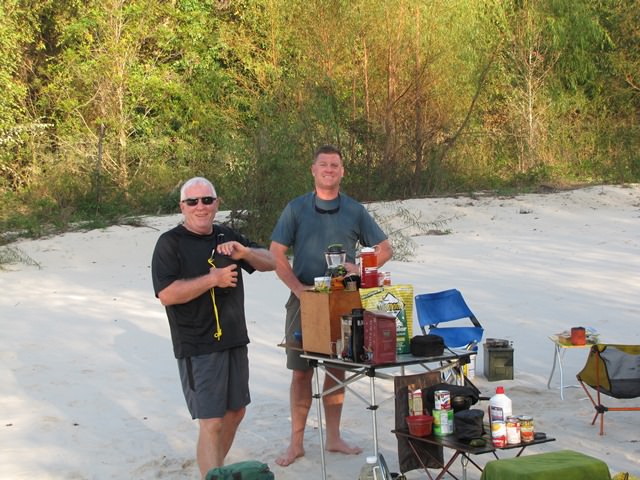 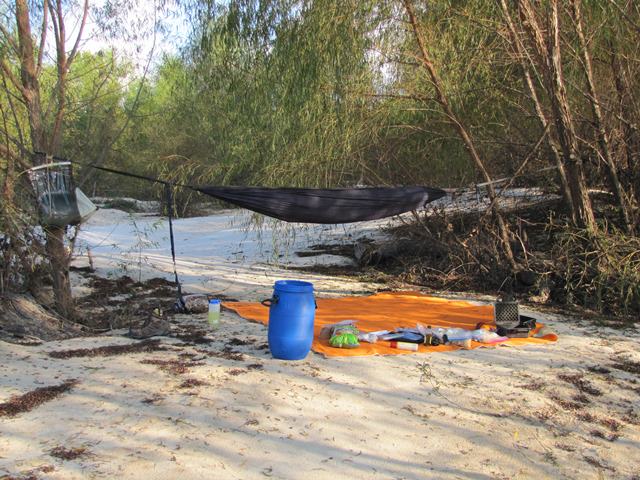 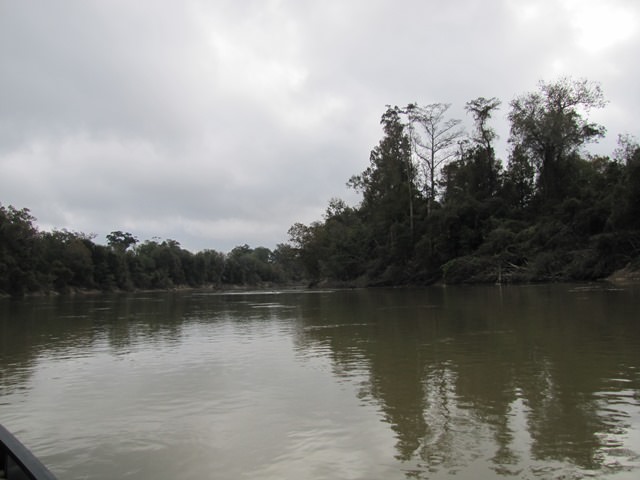 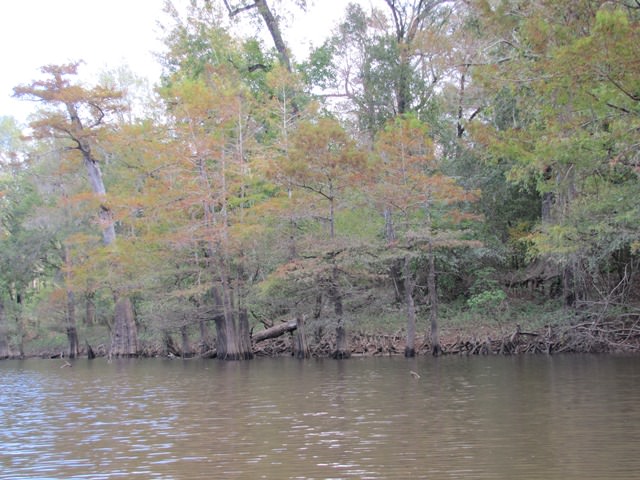 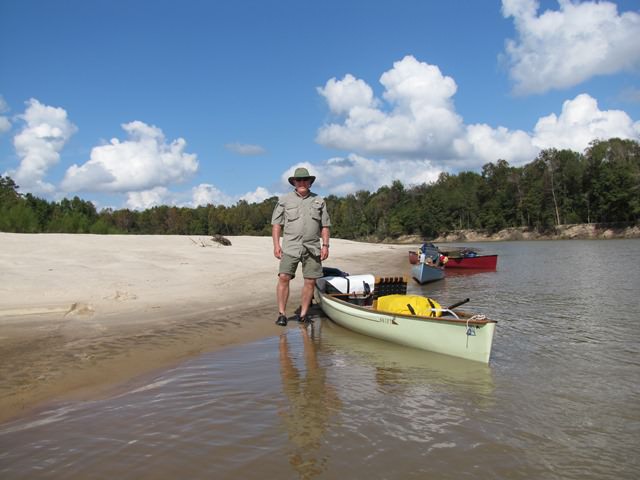 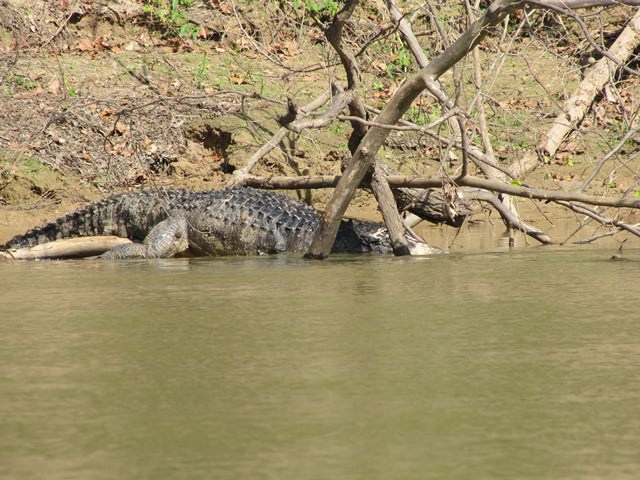 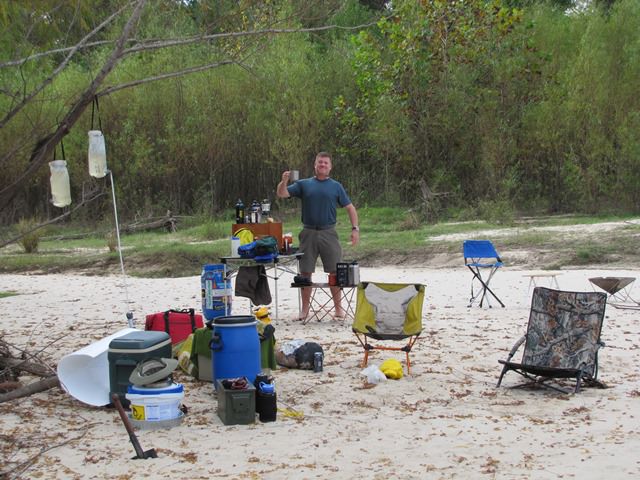 Third nights camp and Todd opening up the bar 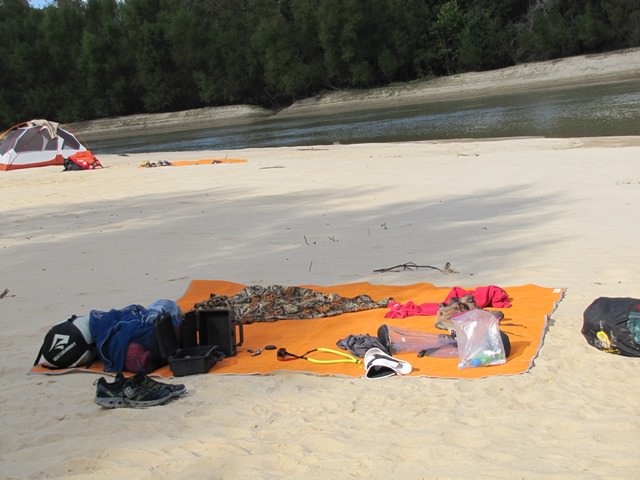 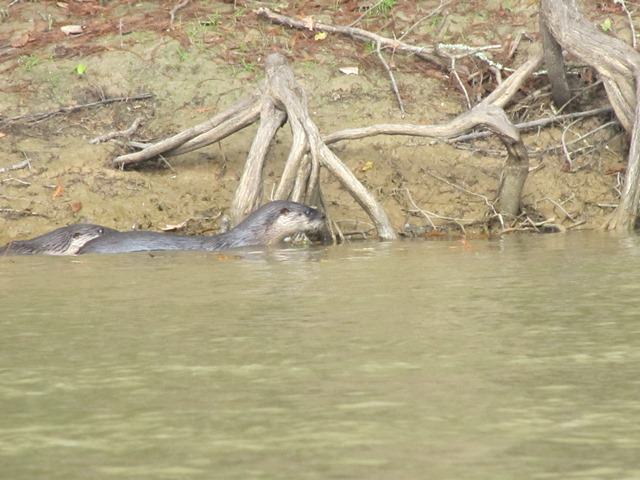 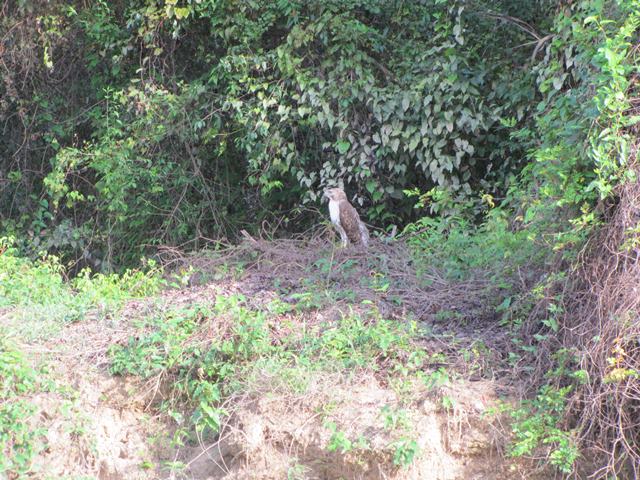 I have at least four to five sites I check before […]

Thanks for the report. Sounds like a good opportun[…]