I make many trips per year and write up about 60% of them. I was not going to write this one up but an event that occurred on the river has motivated me to do so and to also finally write up a Mulberry River trip that I made a few years back where I lost a boat and nearly my life on a rapidly rising river.

I make the trip to this river at least twice per year usually November and March as it is a great place for solitude and with all the recent emphasis on social distancing, I could not think of a finer place to do so. I had made calls to my normal outfitter the week prior but they did not return my calls so I called Richard’s Canoes to run my shuttle, he was open. It was my understanding from him that all other rivers in Missouri had been closed to prevent crowds.

April 9
When I was at Richard’s another couple arrived also looking to get a shuttle and they came down to the Greer crossing ramp just about the time I was loaded and ready to get on the river. I got on the river at 2:30 and paddled on down to Turner Mill then started fishing. The river was up and moving pretty good, the water was a bit murky but not that bad. I made camp about 4:30 and fished my usual spots but no luck. I stopped for some sausage and cheese on cracker with a cup of wine for a bit (happy hour). Now running low on daylight I got a large pile of wood for my fire for the night and morning, then started on dinner. Dinner was Jalepeno bacon wrapped quail, boiled potatoes, and a can of peaches. I did my usual sleeping by the fire curled up under a very bright moon then woke up about 11pm and crawled into my hammock.

April 10
I sleep so well on the river and did not wake up until 6:25, very late for me, being 28 degrees probably had something to do with it. You know that great feeling you have after a most awesome nights sleep, well that was today. The sun was out and it was warming up with no clouds. Breakfast was sausage, eggs and toast with some homemade jelly from my boss, Erika. After camped was picked up and canoe loaded, I fished. This time got one out of a hole I have caught so many in the past but that would be it. I fished that hole and another one down river for another hour and nothing.

I got on the river about 10:40 then fished and took pictures until I made it down to Whitten then just below there I got out and walked a gravel bar to fish. This is another great spot I have landed a lot of trout in the past, nothing. I am beginning to think that they are sitting on their beds protecting the eggs. This is about a month past my usual spring time on this river so that might be the case, or it could be just not my day. I paddled on down to a large gravel bar with lots of shade on river left to enjoy my lunch, passing many otters and bald eagles along the way. This is a place I have camped before and there is a small spring coming up right at the edge of the river. On the other side of the river there is a much larger spring back up on the woods a bit. The couple I saw at the put in had camped here the night before and they were just leaving when I arrived. They were not sure if they were going to spend another night or paddle on down to the take out.

After lunch I paddled some but mostly fished, again nothing. Just before Boze Mill I picked up my pace as it is now 3:30 and I needed to find a camp on past Boze Mill. As I rounded the bend I could see that couple downriver just entering a bend to the right before the only rapid on the river. I lost site for a bit then passed by a power boat with a couple of guys fishing at a creek entrance on river right. I said my hello and kept on rounding the bend to the rapid. As I rounded the bend I could see the lady in the river and he was with canoe upside down about to make the left bank. Then as I got closer she was pinned on a small strainer and being drug under and screaming for her life and someone to save her. She was hanging on with everything she had. I was trying to position myself to come in and paddle up to her but there was a large root ball just down from her so my only option would have been to get on the bank and use my throw rope then try and get her out. Just about this time that powerboat is coming downriver and about to pass by. I waved my paddle then pointed toward her several times, they then realized what was going on and moved in alongside of her. They managed to get her to hang on to the boat but could not get her in. They motored her across the river to safe location. The fellow asked if I would go catch up and retrieve some of his stuff and dry bag floating down the river. I got some of it but the dry bag was hung up in a strainer out of reach from the bank. I walked what I had back up to him and the guys in the power boat had managed to get a rope on his canoe and pull it out and across the river to empty it out. After I could see all were safe and the boat was useable I told the fellow I would go on down and make an attempt to get his dry bag then they could pick it at my camp on the way to their truck. I managed to paddle up from the back of the strainer and dislodge and retrieve his drybag.
I paddled on down a bit and made camp on river right on a nice high gravel sand mix with copious amounts of firewood. The guys in powerboat came down to my camp and took the dry bag to them upstream, very nice of them for everything they did that day. They then stopped back at my camp for a chat about the events. They said they had no idea that anything was wrong until I waved and that if I had not been there and waved they would have driven on by as they could not see or hear her with only her head just above the water and her husband not visible either. They said when they got to her she was limp, spent and could not talk, and estimated she was minutes away from letting go. That cold water and hanging on with all you have made quick work. The only people on 25 miles of river and all came together within the same critical 5 minutes, what are the chances?

Now, I do not know the couple and try not to judge people and truly believe to each his own. They did not have PFDs on and none in the canoe either, both with bathing suits on. He had said he paddled this and other rivers many times and this was his first time to turn over. This is a class I river and about as calm as they come so I find that just might be a stretch of the truth. That rapid does have some nice drop and wave trains but are easily avoided by running left. When I saw them earlier in the day where I stopped for lunch he mentioned they just go married in January and this was her first trip, wow way to show a lady a good time.

Okay, now it is time for me to get on to more serious work, firewood, camp, happy hour, dinner, night cap and another wonderful nights sleep under a bright moon. Dinner was that one nice fish, boiled potatoes. The day had warmed to about 60 but the air was dry and as soon as the sun got low you could feel it cooling quickly. No problem, lots of dry wood and a big fire to end the day. There were a lot of owls and coyotes during the night and an occasional beaver slapping the water, her way of telling me I was not welcome.

April 11
I slept until 5:55 just with a first bit of daylight coming through the trees. I got that fire revived quickly as it was 33 out with some clouds. I have never camped on this river without it raining but so far not a drop and was only 15 minutes on down to my truck. After some same breakfast as the day prior and picking up camp the clouds got dark and yep, it started to rain. I thought for sure I would get off without rain for this trip. It really did not amount to much and stopped before I got the canoe loaded. I got to my truck a bit after 8, unloaded my canoe. The take out has changed for the better. They have made a cut in the bulkhead and made a gentle gravel filled slope that is perfect for parking your canoe and unloading without having to get waist or more deep to unload like before. I walked up to get my truck and it was not there yet so went on back to tidy up my gear and wash my canoe out. Just about the time I was changing shoes they show up with my truck, great timing. 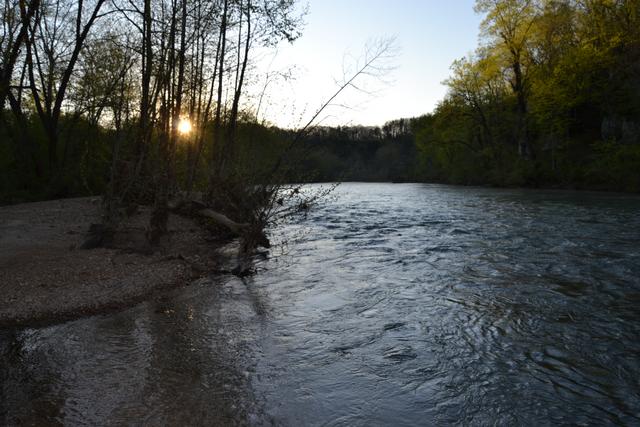 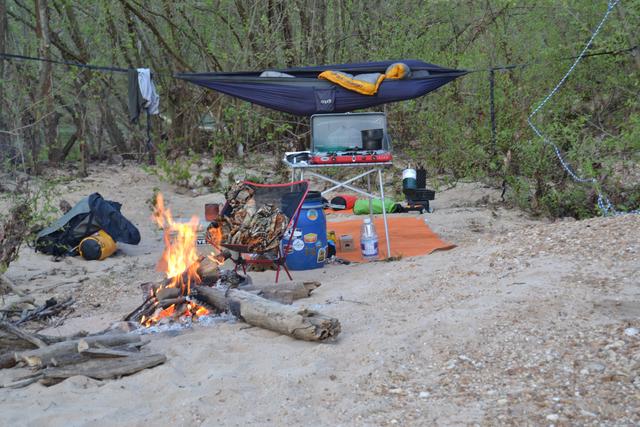 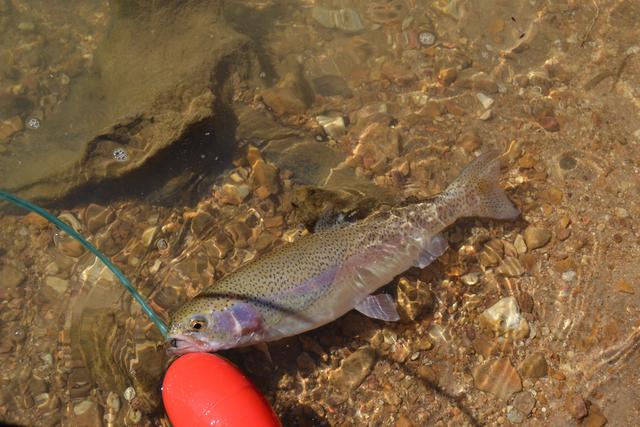 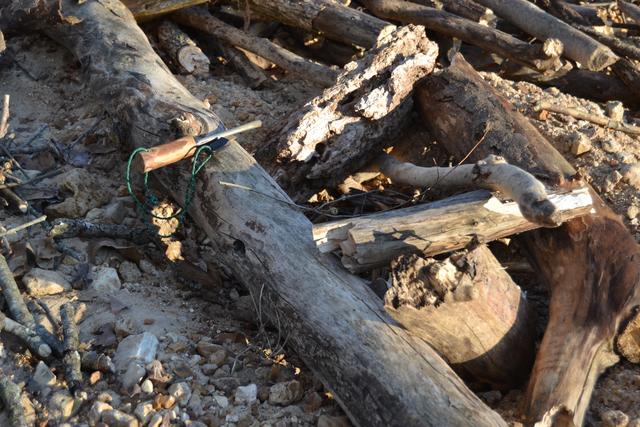 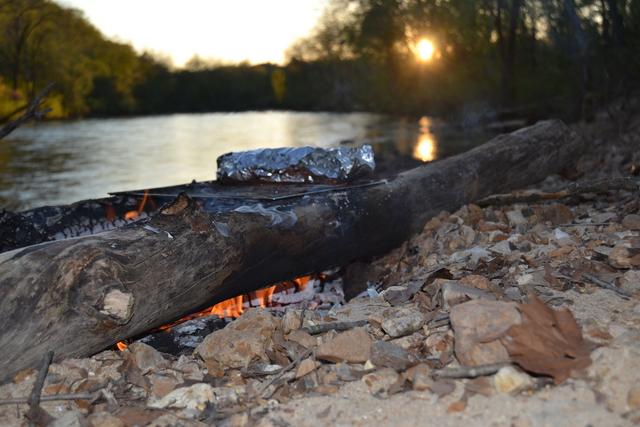 Dinner on the fire 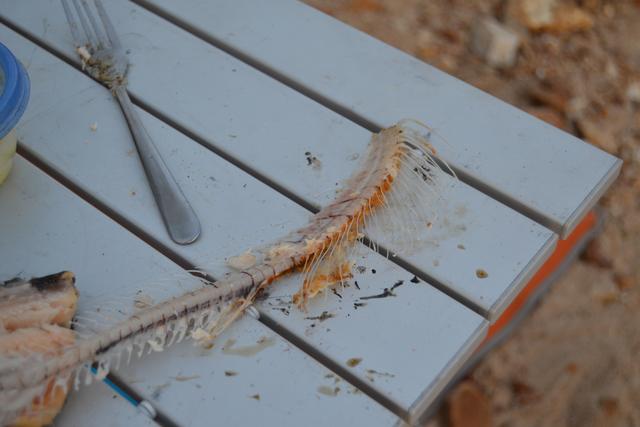 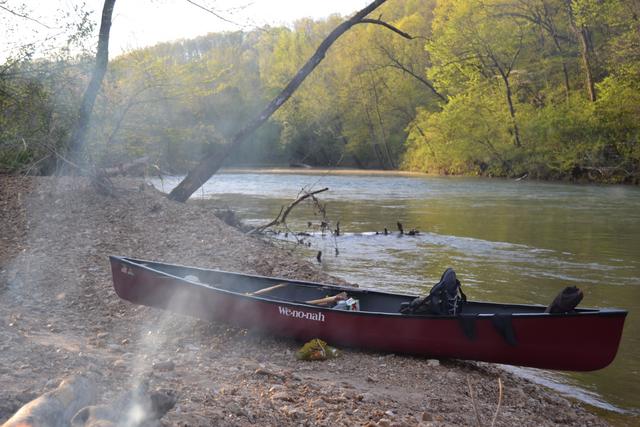 Smoke on the water, last morning 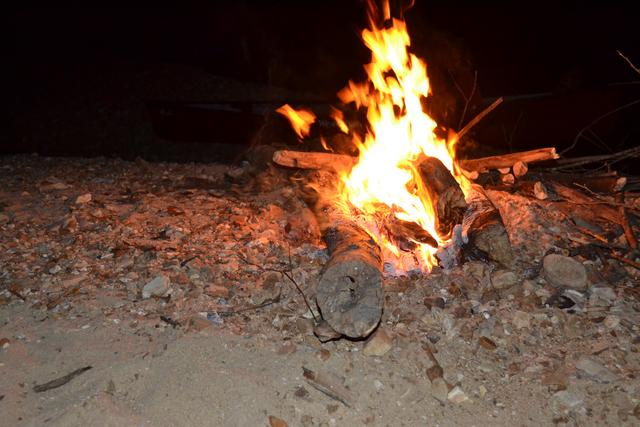 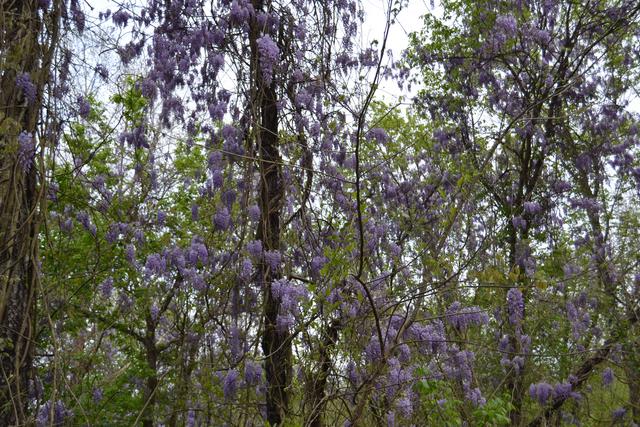 Some Wisteria in full bloom 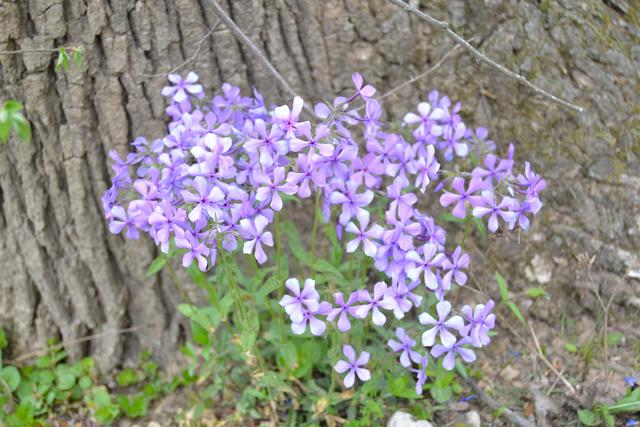 Some wild flowers along the way 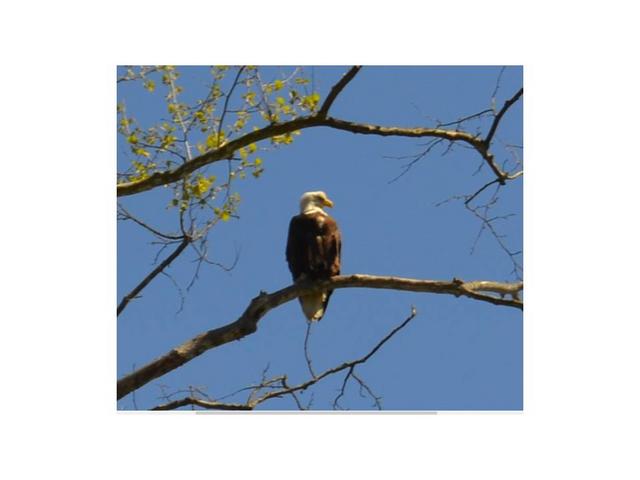 Impressed! Great report and pictures! Lovely trout! Glad you did good and had a good time. Thanks for sharing. Wish I was there with you!!!!

Hello all, Its been years that i've posted on he[…]

There was a Significant water change about 1 mile […]