Watching some of the R/C boats that do 50 MPH on batteries, I can't help but think one of their drive systems can be adapted for kayaks. I've been experimenting with some 12V 775 sized motors, and I think there's a lot of low cost potential there. Not for much speed, but just to augment my ever diminishing paddling capacity as Father Time catches up with me. Or for a few more $$$, some of the newer tech permanent magnet motors. The tech is developing so fast for the drone and hobby market.

Not meaning to get too far afield, here's an interesting project along those lines...

By SWFinatic -  Mon Feb 24, 2020 9:53 am
-  Mon Feb 24, 2020 9:53 am #2299504
Thanks that's interesting. Did they mention whether or not this takes away the ability for a fish finder transducer to be installed under the kayak in the transducer pocket? I don't have a fish finder on my Viking which I use for fishing the bays but I do have one on my Pro Angler and rely on it often when fishing lakes and offshore. Did Damon mention anything about the size of the motor in terms of horsepower or watt rating? I do like that he is local (central Texas).

He had a Hobie there, and it was really neat how it plugged into the drive well - they also offer a permanent skid-mount for other boats.

There's probably still room on that plate for a sounder transducer, though operating the motor at the same time might interfere.
It's nothing to deploy and lift the motor drive pivoting on the plate.
Last edited by Ron Mc on Mon Feb 24, 2020 10:04 am, edited 1 time in total. 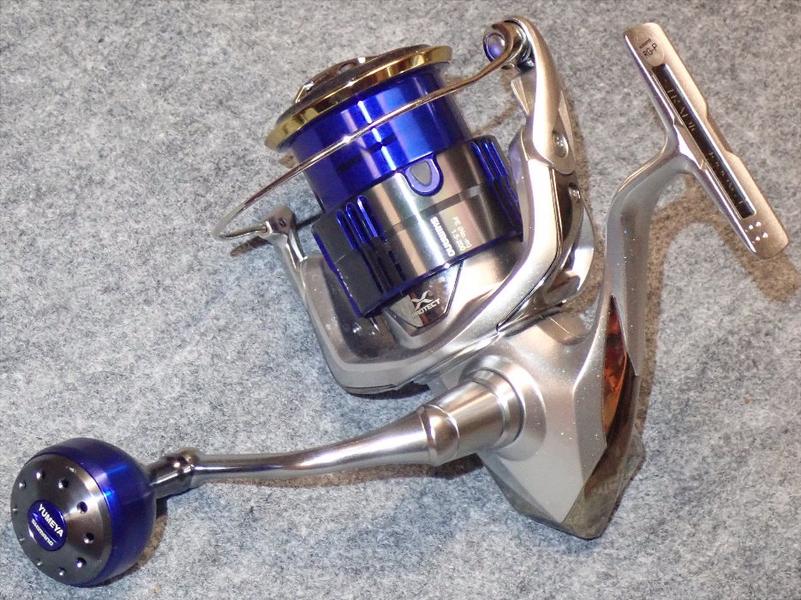 There's actually a logical explanation here. After fishing the Stradic FL4000, I hated the big flat tee-handle that arrived on the reel. Buying the Yumeya knob from Japan was half the cost of buying the FL5000 handle, and I upgraded the inboard handle bushing with a BB at the same time.
Likewise, I like having a loaded spare spinning spool in my kayak, and the sale price I found in Japan on the matching Yumeya spool was competitive with the stock Stradic spare spool, much better made, and incorporates a spool BB.
It's neat that '19 Stradic, '19 Vanquish, and '18 Stella interchange parts. 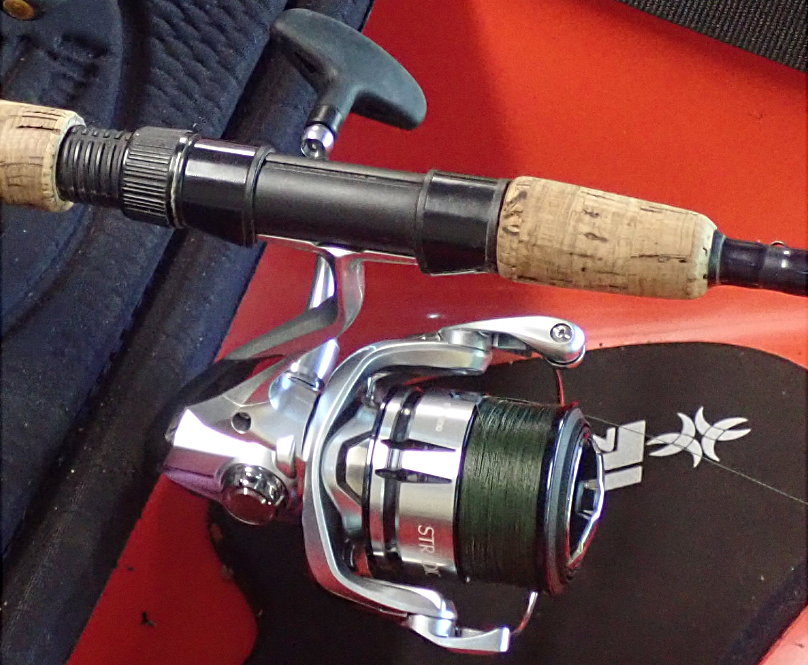 TexasJim wrote:The only motor add-on I've seen that makes sense is the Bixpy system that Viking offers for their kayaks. It's a 3-blade prop drive that mounts on the rudder. If you get in shallow water, you can tilt it up. But, I wouldn't pay $2000+ bucks for one. I could build one for $100 or less. But then, title, registration........ a 30 pound battery, a 15 pound motor on my 60-pound kayak? Nope. I'll paddle. TexasJim

The Bixpy motor setup is only about $1200 and that would include pretty mush everything you need. It is also only adding about 7lbs for the motor AND battery. I have been playing with it for the past year and really like it. I am a paddler at my core but for certain applications it is a great addition. On my Viking Kayak Reload I usually set it to speed 3-4 (it has 12 forward and 3 reverse) as a paddling assist and maintain about 5mph with little effort. At that speed I get about 7 hours of life out of the battery.

Be interesting to see how your 775 motor experiments work out. Figured sooner or later someone would print a lower housing designed for one of the low Kv motors and the corresponding efficient prop. Lets face it, 4-5 mph is what you are going to get out of the kayak hull without huge power imput. If you can get range at 3.5.....

Played with them a bit as I need a new shoulder and can’t afford the time until next year. A couple mph and lightly paddled allows me to waste my shoulder casting

Having a kayak with a power pole mount allows easy mounting. After too much screwing around with stuff (rc pwm etc) the easiest way is to get an MK with a pwm and cannibalize it. on the models with 3 wires to the speed control, you can separate it from the pwm to extend the wires to a hand unit. Pull the board and put it in an aluminum Bud enclosure with cable glands. I made proto mounts out of plywood until I was satisfied then used those as a template for starboard.

Now I need someone smarter than me to figure out how to improve efficiency and lighter! Just happened to be thinking about adding a foil/fairing or whatever you call it to the motor shaft

WC53 wrote: Be interesting to see how your 775 motor experiments work out. Figured sooner or later someone would print a lower housing designed for one of the low Kv motors and the corresponding efficient prop. Lets face it, 4-5 mph is what you are going to get out of the kayak hull without huge power imput. If you can get range at 3.5.....

I had a 2HP Yamaha on this kayak in Thailand, and anything over 6-8 MPH, the bow wave would swamp the deck and drench me. About half throttle, or I was going to have a miserable ride.

On the Bixby, I'm pleased to hear he got so many hours (and miles) out of the battery.

Rhetorical question - taken to the trouble to manufacture, market and sell, what would it cost...

Ha ha. Couldn't resist. Good lawyers can figure out how to make money off about anything...

Watch for the new patent-pending "SHOFFER DRIVE" at an Academy near you!

I just decided to make my own and improve on his design a bit.

There are other Youtube videos that served as my inspiration.

Rhetorical question - taken to the trouble to manufacture, market and sell, what would it cost...

Not as slick on the controls, but looks like it's workable at $399 plus a battery from Montgomery, if you don't want to DIY and you have a Hobie that it fits.

About half of that for the $140 motor, $30 Hobie plug (making it fit other model Hobies) plus assorted bits and bobs. They claim about an hour or two to shorten the shaft and drill out the plug...

That's a lot more palatable than $2,800. And it looks sturdier than the plastic model with a vulnerable hinge. Hell, I may have to start looking for another Hobie for the fleet... Or get my family's Hobies registered since they don't have TX numbers yet.

Edit: Quick question... Has anyone tried to fit a 30# Motorguide or MinnKota through the pedal hole in a Hobie?

Ron Mc wrote:Holy shit. your post has nothing to do with quoting me.
You should just leave me out of it.

Ron Mc wrote:not everyone can do that bro - you did a great job

RonMc - coming from an engineer, I will take the compliment with a hearty "Thanks!"

impulse wrote:Edit: Quick question... Has anyone tried to fit a 30# Motorguide or MinnKota through the pedal hole in a Hobie?

Now, I have a 30LB TM motor I got from Bass Pro that I hooked on to the Outback, but I had to build a transom of sorts, and it hangs off the side of the yak. The transom has rod holders on it also. I initially got the idea from this guy:

But then I found a video from Zoffinger on PVC Rod Holders that convinced me to use PVC that would fit perfectly into the rear rod holders on my 2015 Outback.

I still have that contraption in my garage (actually I have two of them - one using 2x4 for sturdiness, and one using 1x4 for lighter weight), along with the TM. [The one thing one should remember is to add a counterweight to the opposite side of the kayak so that the kayak is balanced].

I will be happy to sell those two mounts, and the Trolling Motor, to someone for $150. You will need to pick up a 12-volt battery, but the transom mount will fit the back rod holders on a 2012-2015 Outback for sure and can be modified with ease to fit any kayak, I suspect. You might have to bend a little PVC to fit into the rod holders of your boat, but that's pretty easy to do with a heat gun (which you can get for 20 bucks at Harbor Freight). Youtube has tons of videos on this.

SWFinatic wrote:Here's a unique no drill trolling motor mounting option that uses one of the rod holders. This is not a mirage drive well mounting option but fairly effortless.


Thanks for posting this, SWFanatic. I built that guy's invention first, but it just seemed so flimsy. I could see that motor dropping off the yak to Davy Jones' locker, and that would be no bueno.
But I do like that dude’s voice.

I was out over the past weekend got couple bass an[…]

Thanks for the info. What about a Fish Finder! My […]