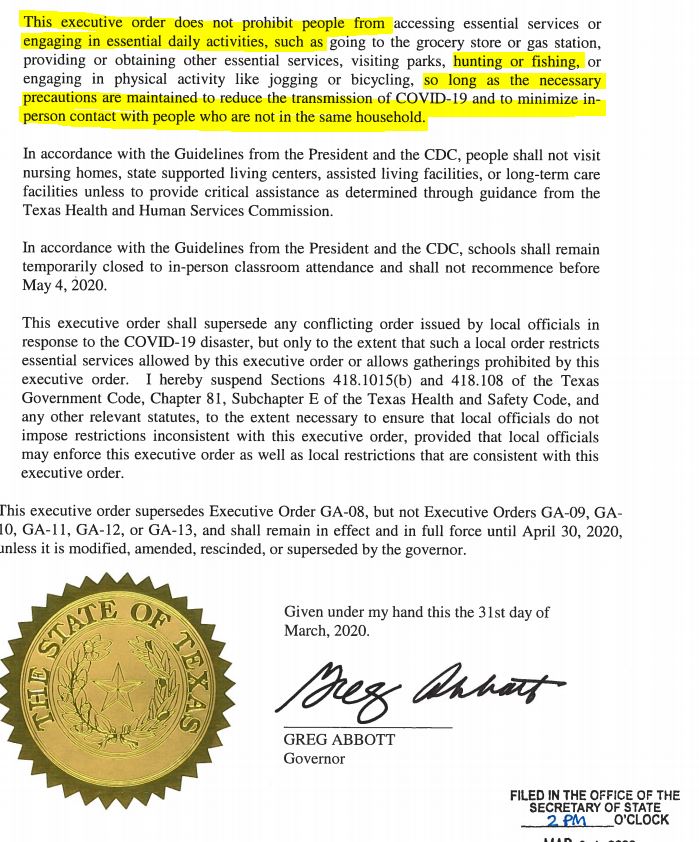 By SWFinatic -  Wed Apr 01, 2020 10:01 am
-  Wed Apr 01, 2020 10:01 am #2301075
Fishing to many of us is what we look forward to. But if we are not responsible the government will soon take this away from us like they have many other things. If we can all go fishing responsibly and not come into contact with anyone while going fishing which may include things like going to Academy or your local sporting goods store for tackle/gear, buying bait, etc. we will still have this right. I think times are going to get worse before they get better. For me fishing will be important in getting through this.

SWFinatic wrote:For me fishing will be important in getting through this.

Is that from the local government?

Friends thought I was nuts, when during the past i2 years, I spent at least three weeks per year fly fishing in Ascension Bay. The memories I possess within my mind's eye are priceless.

Try paddle boarding in Texas without a life jacket, then refusing to get off the water when the beach patrol tells you to. Looks like just a run of the mill violation with a stubborn violator, forcing the Lifeguards to call in the big guns.

I'm not seeing anything about violating a "social distancing" order.

To be honest, I didn't realize SUP'ing required a PFD. To me, it's just like surfing, and they're not required to wear one (or are they now?). Then I saw that episode of Lone Star Law where they fined 6 people for SUP'ing with no PFD... A word to the wise if you like to SUP in Texas. I often see them from the back deck with no life jackets on the board.

By YakRunabout -  Fri Apr 03, 2020 7:22 pm
-  Fri Apr 03, 2020 7:22 pm #2301174
Impulse - You are correct that there appears to be a life jacket issue based on the picture and that could have been an aspect with the lifeguard. The article just states he was arrested for disobeying a lifeguard as well as a violation of government code 8665, which pertains to neglecting to obey a lawful order.
The lawful order in this case being California's stay at home order.
The information concerning the stay at home order is not in the pic included.

YakRunabout wrote:Impulse - You are correct that there appears to be a life jacket issue based on the picture and that could have been an aspect with the lifeguard. The article just states he was arrested for disobeying a lifeguard as well as a violation of government code 8665, which pertains to neglecting to obey a lawful order.
The lawful order in this case being California's stay at home order.
The information concerning the stay at home order is not in the pic included.

I'm wondering if that "lawful order" was to get to shore because he didn't have a life jacket. It's tempting to thumb your nose at an unarmed lifeguard, but a few episodes of Baywatch (plus that awful movie) indicates they have police powers. It's like messing with meter maids. They don't carry guns, but they do carry radios to fetch the guys who do. Best to do what they tell you to, in Texas or California.

As you can see, the Executive Order supersedes conflicting local orders "but only to the extent that such a local order restricts essential services allowed by this executive order...." Then, the governor “suspends” the portion of the Government Code that allows local municipalities to declare their own disasters (and thereby grants them powers like controlling ingress and egress to places, ordering curfews and stay at home orders, etc.). In other words, and assuming the governor has the power to suspend existing statutes on the books at whim, the governor has now taken away the right and ability of any local government unit to issue orders that are “inconsistent with” his EO and has invalidated all local orders that “restrict essential services allowed by the [EO]" while permitting local authorities the ability to enforce only those “local restrictions that are consistent with this [EO].” To me, then, local authorities no longer have the right to enforce local restrictions that are not consistent with the EO.

As I posted above, the EO specifically says that it does not restrict “hunting and fishing” so long as CDC precautions are maintained. To the extent that Aransas County’s local order restricts hunting or fishing, I’d say it is now been preempted and is no longer enforceable.

I don’t really know if the governor has the authority to “suspend” existing statutes like that, but maybe that will be my next research project. I suspect in a disaster situation he can.

If you do happen to get out there and fish to test it out, and a law enforcement official hassles you about it, my advice is comply with law enforcement directives and challenge it later in court, if you are so inclined. It is never a good idea to deliberately disobey an order issued by Johnny Law right to their face. Let them write the ticket, thank them for their service, apologize for having to take up their time, and then challenge the ticket in court later.
Last edited by shoffer on Sat Apr 04, 2020 8:41 am, edited 2 times in total.

shoffer wrote:Tombo - on the Aransas county order, you might wanna look into whether that order has been preempted by the state order. Generally, the governor has the authority to issue that notice and to the extent the state order conflicts with a local order, the state order preempts the local order.

"To engage in outdoor activity, provided the individuals comply with social distancing requirements of six feet (for example, walking, biking, hiking, or running)."

The 'for example' provides a list of activities but it is not presented as 'only' these activities. While fishing is not on this list, it is also not specifically prohibited. My reading of this would be that fishing is allowed.
(Of course there is also the issue discussed above of this order superseded by the Governor's order.)

By shoffer -  Sat Apr 04, 2020 11:49 am
-  Sat Apr 04, 2020 11:49 am #2301209
Based on my analysis above, any local order that is "inconsistent with" the Governor's EO of March 31, 2020 cannot be enforced. The EO specifically permits fishing as long as the distancing precautions are met. [And let's face it, fishermen have never been in favor of people in close proximity to them while fishing, which is how the pejorative term Potlicker came into being, so telling us to social distance is like telling a human to remember to breathe or blink your eyes - it is an involuntary response for us].

I checked out the Galveston Order earlier, and my analysis of it was even on its face, it does not prohibit fishing, so long as it is done with distancing and not in a closed-down area - beaches, for instance. viewtopic.php?f=1&t=251601

Now that the EO is in place, I am more convinced than ever that fishing is legal and permitted statewide, irrespective of any local orders to the contrary, so long as distancing precautions are maintained.

As I said before, if you are out there fishing and a law enforcement official hassles you about it, my advice is to politely comply with law enforcement directives issued on scene. If you get a ticket, you can always challenge it later in court, if you are so inclined. But I can tell you that it is never a wise idea to deliberately disobey an order issued by Johnny Law right in their face. Let them write the ticket, and while they are doing that, be sure and thank them for their service, apologize for having to take up their valuable time, and say nothing about whether you agree or disagree with their interpretation or jurisdiction. You don't waive any defenses to a ticket or criminal charge by remaining silent as the charge is being prepared -- hell, that is exactly what you are told upon arrest - you DO have the right to remain silent. So, if you choose to speak, then just be nice and polite. I am sure the peace officer did not get into this line of work so he could hassle fishermen. He or she is doing what they have been told to do by someone who presumably believes they still have the right to enforce local rules, so you do the same and challenge it in court later.

By Tombo -  Sat Apr 04, 2020 2:26 pm
-  Sat Apr 04, 2020 2:26 pm #2301210
Thank you Shoffer, facts are what is needed. In the end, we still must think about individual needs that exceed precautions. In my case, as stated earlier, I have three strikes against me. This virus could easily kill me. Shoffer sounds like an educated, level headed kayaker and has excellent points.

By SWFinatic -  Sat Apr 04, 2020 3:28 pm
-  Sat Apr 04, 2020 3:28 pm #2301212
Shoffer not disagreeing with you but I have heard Governor Abbott say on multiple occasions while all local governments shall at minimum comply with the EO any local government can take it a step further and increase levels of security or take addition steps of precaution they just can't reduce from what is outlined in the EO. Have you heard this?

Yes, I'll be going tomorrow morning. Should be out[…]

I suspect a couple of videos will be forthcoming f[…]

Just a heads up on surf conditions at the Sea Isl[…]

Well you got my attention with the new Unlimited! […]