Now I know I could show you red fish after red fish and after red fish but that would be redundant (the same goes for trout). The bite was so on that I could of caught my limit of reds and trout several times over. The fish were there and they just happened to like what I was throwing. I decided to bring my usual six rod setup. That's right, you heard me. I brought six rods. If you think I'm kidding, ask anyone that fishes with me. If you think that's crazy, you should see me spider rigging for crappie (Even though you don't see all the rods, I spider rig with nine rods. Here you see six. The others are on the side slightly behind me. 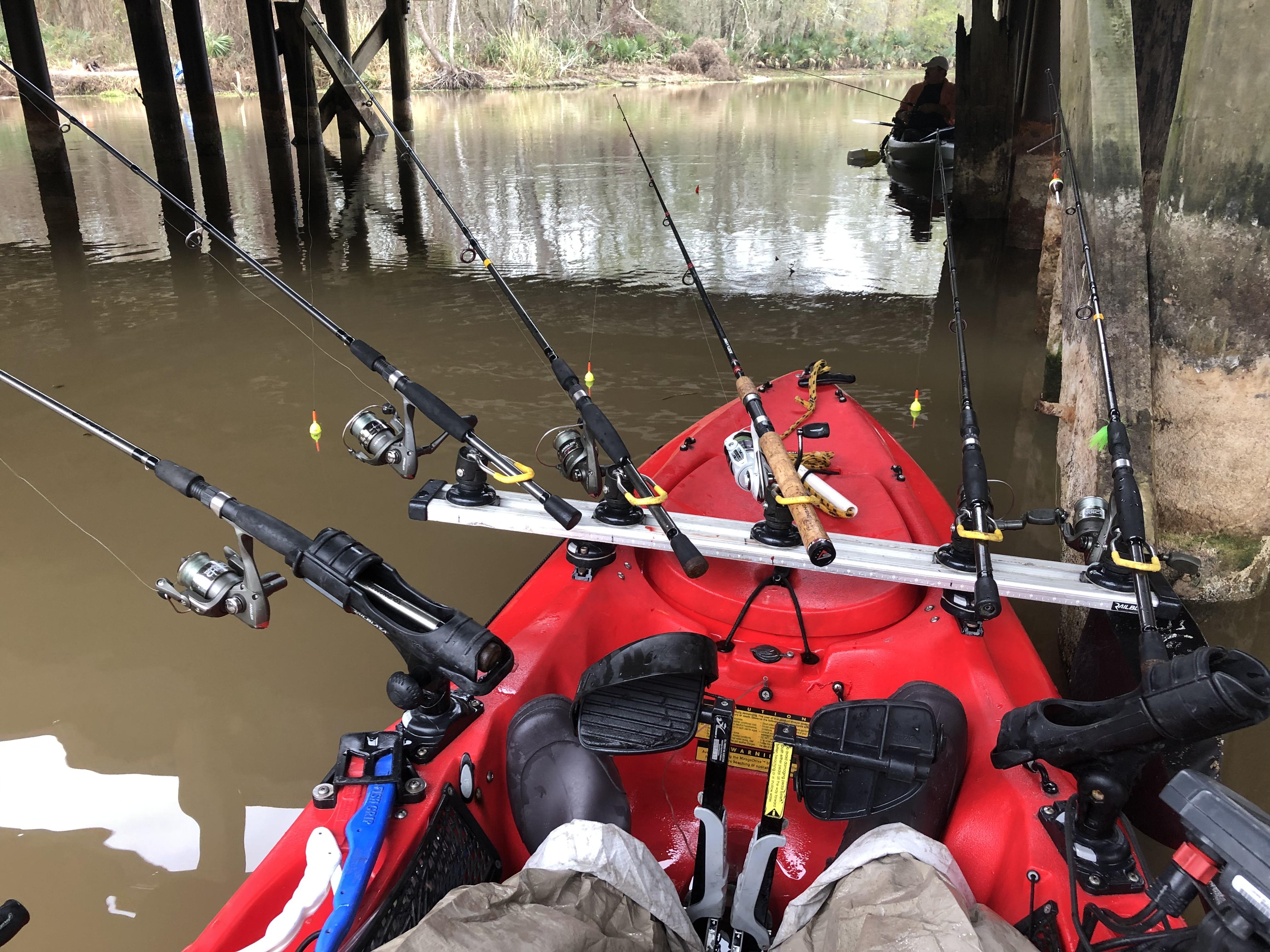 The weather was nice and the winds were fairly calm. It was calling for 13 mph winds but somehow it was around 6 mph the entire time I was there. Nobody was there kayak night fishing except me. I had the water all to myself. Here are just a few pics. 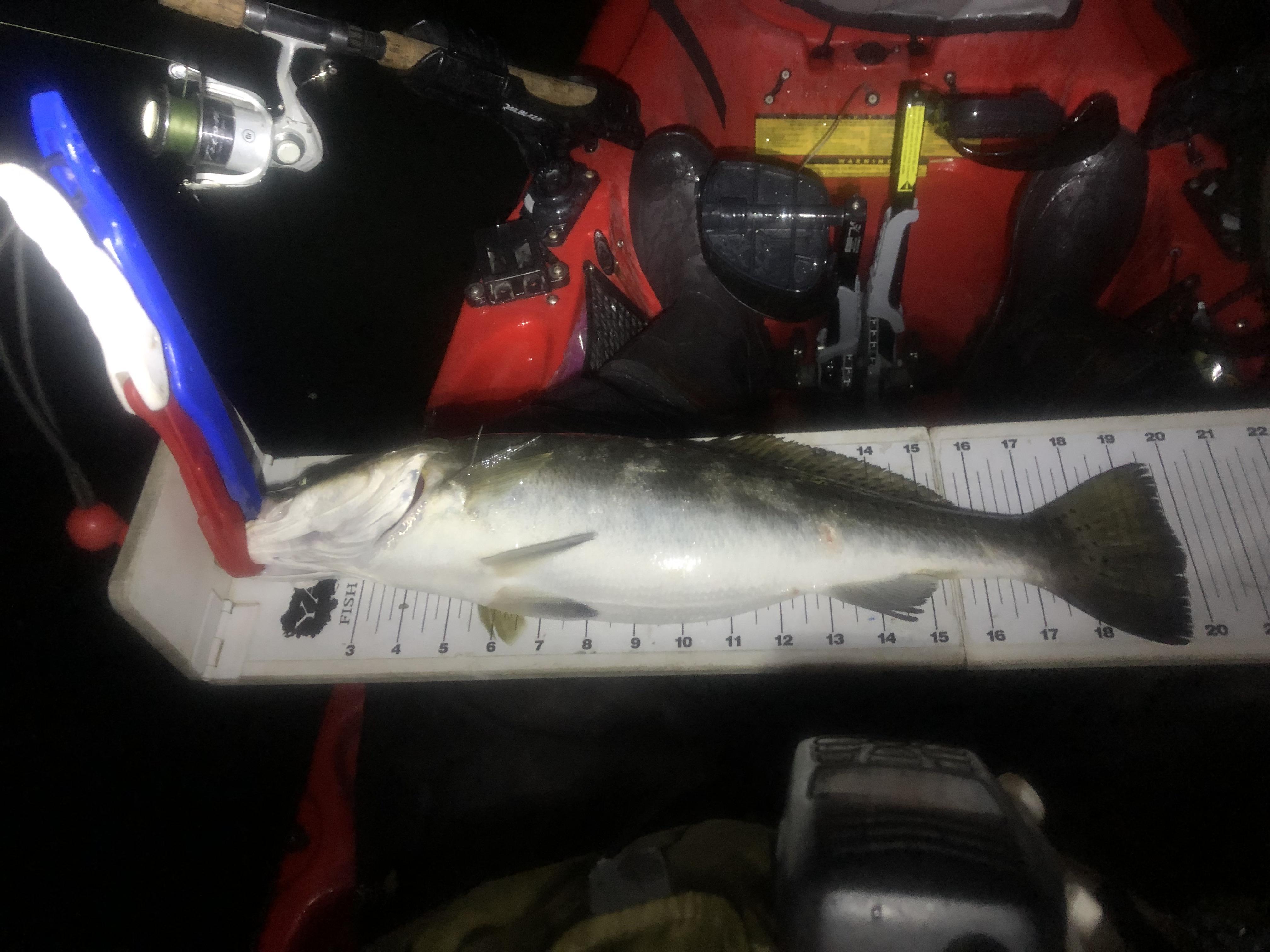 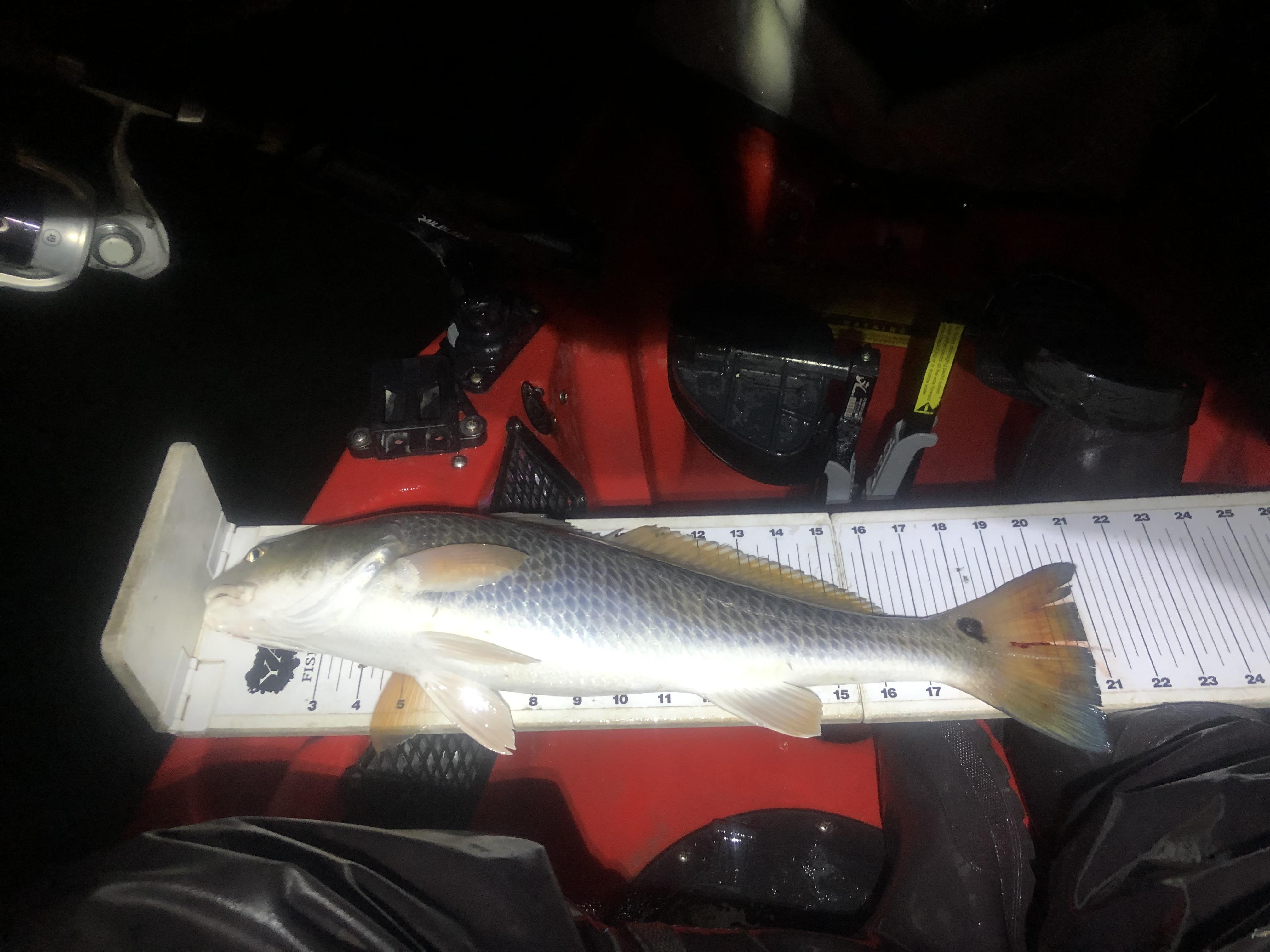 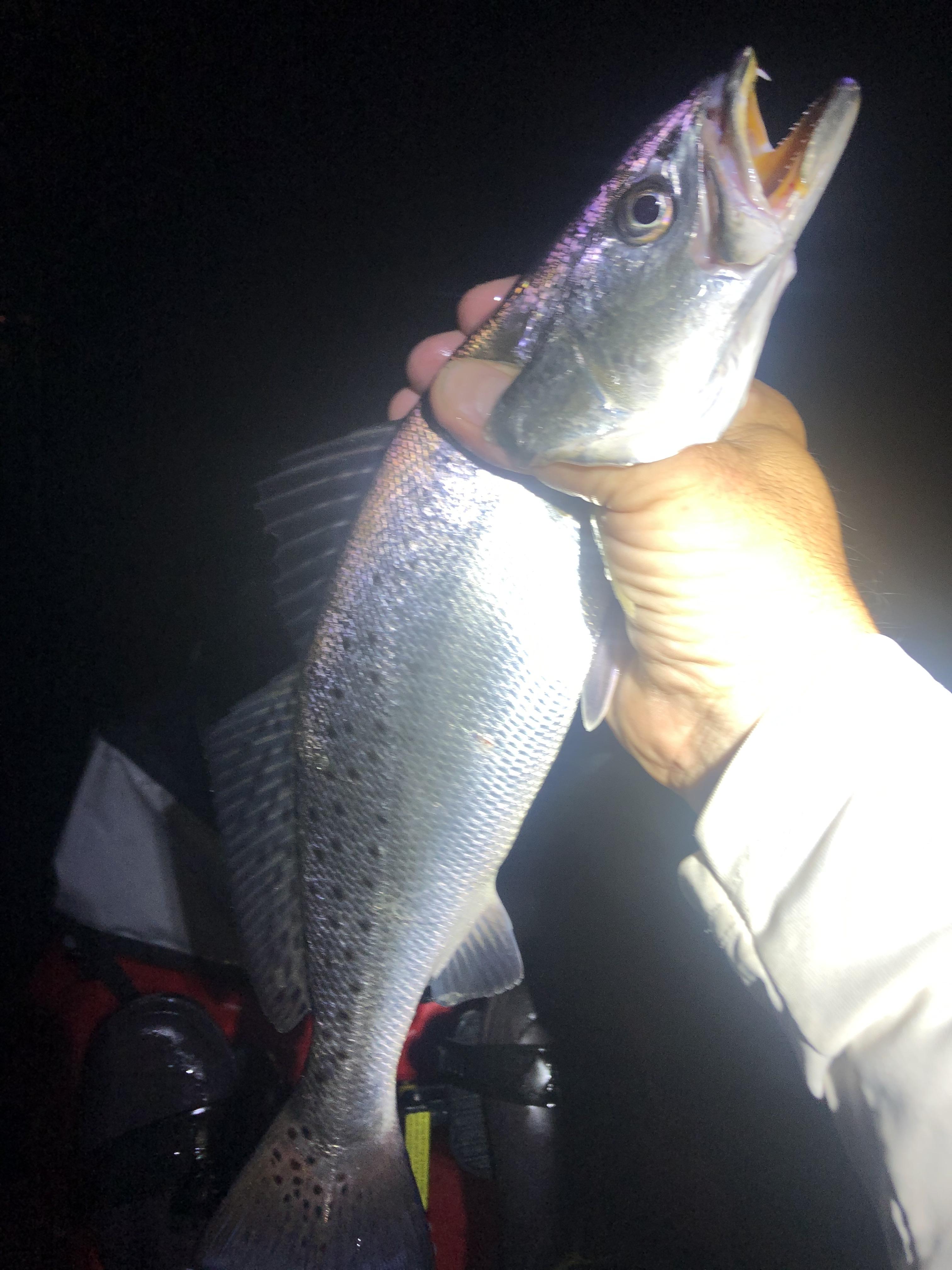 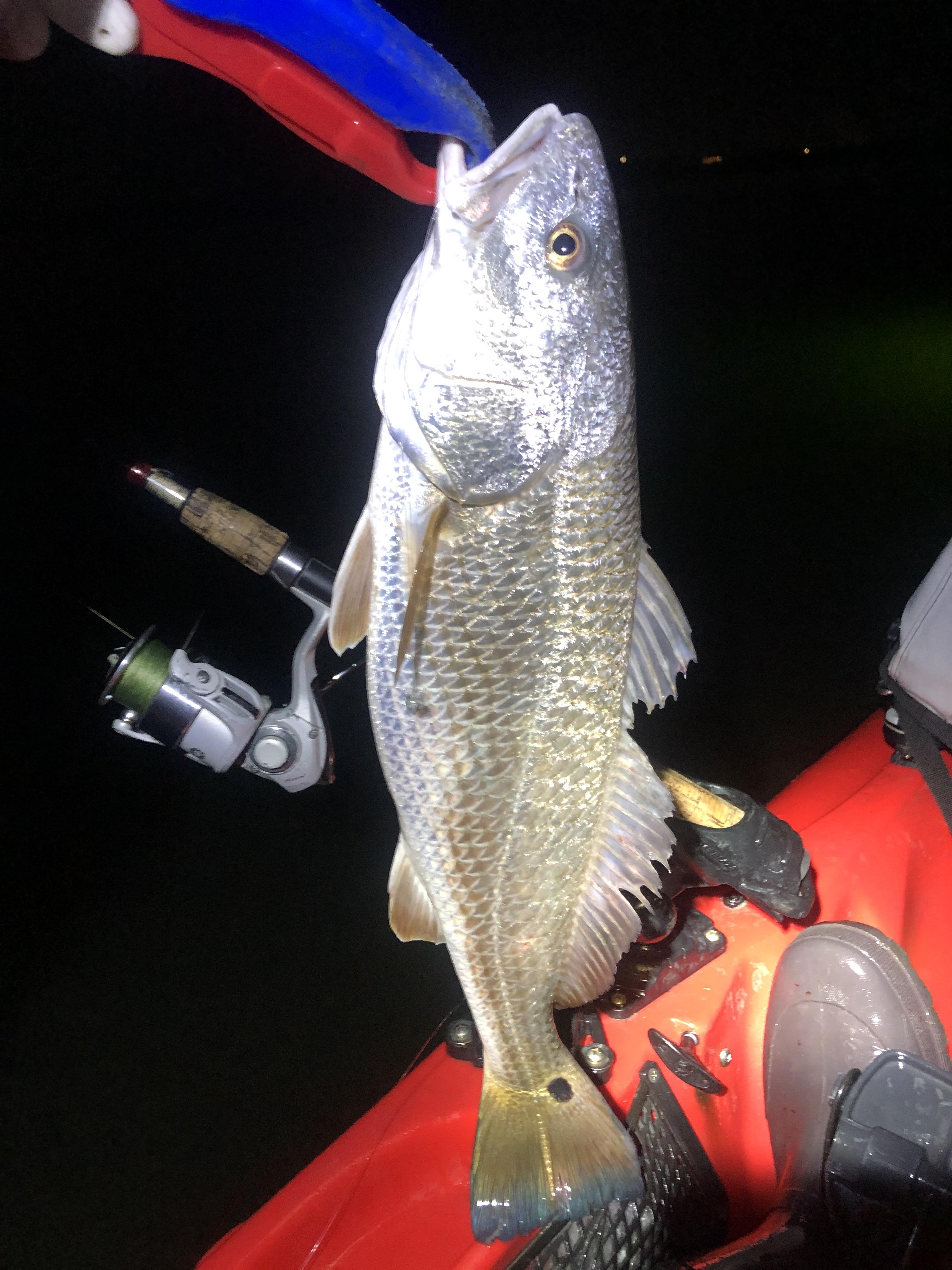 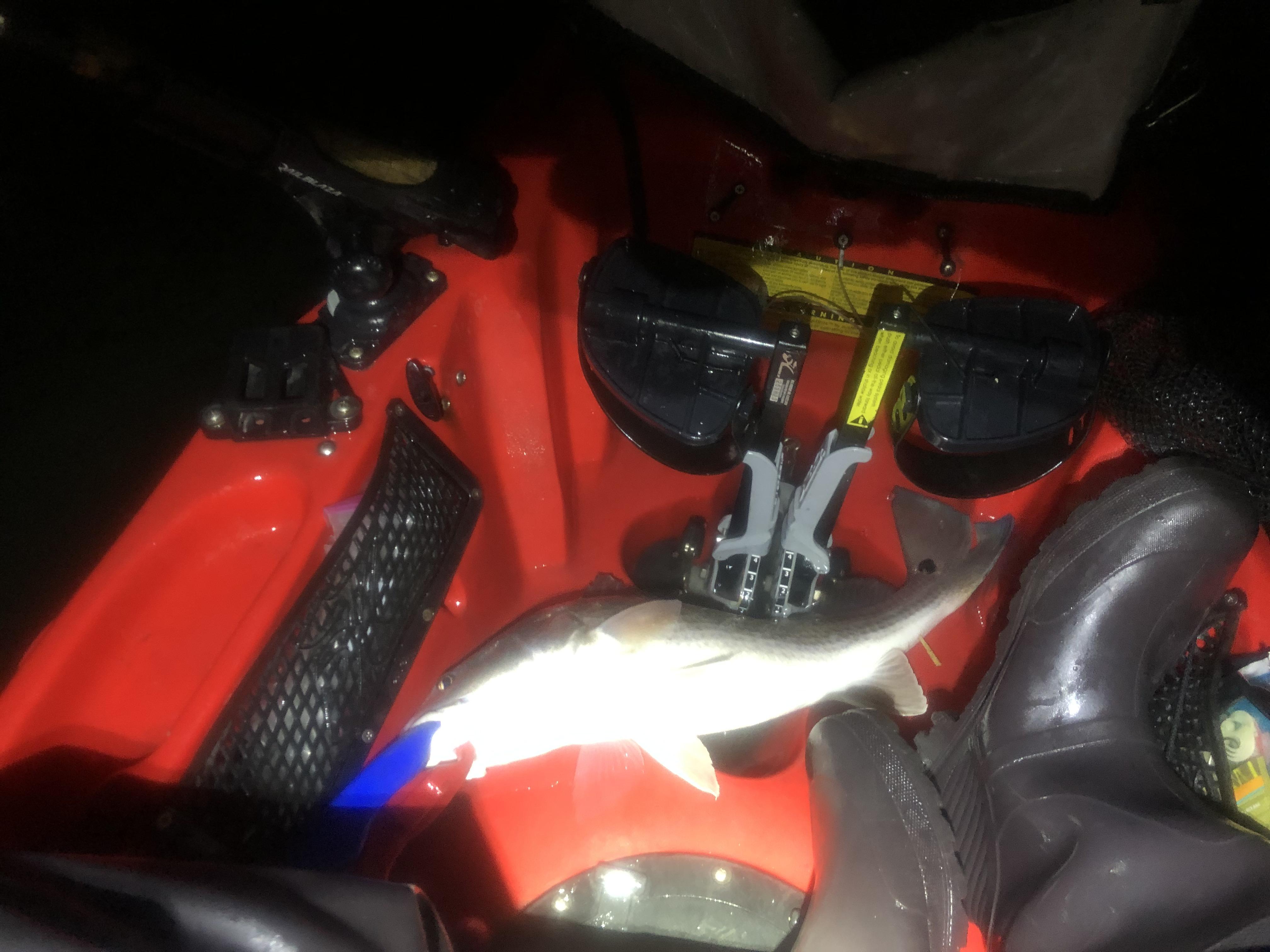 After limiting fairly quickly I decided to head back to shore so that I could get back home. The fishing was great and a mess of fish to clean. I told my wife that if she let me go fishing that I would clean and cook the fish the next day for dinner. She agreed and I was able to bring home the fish! 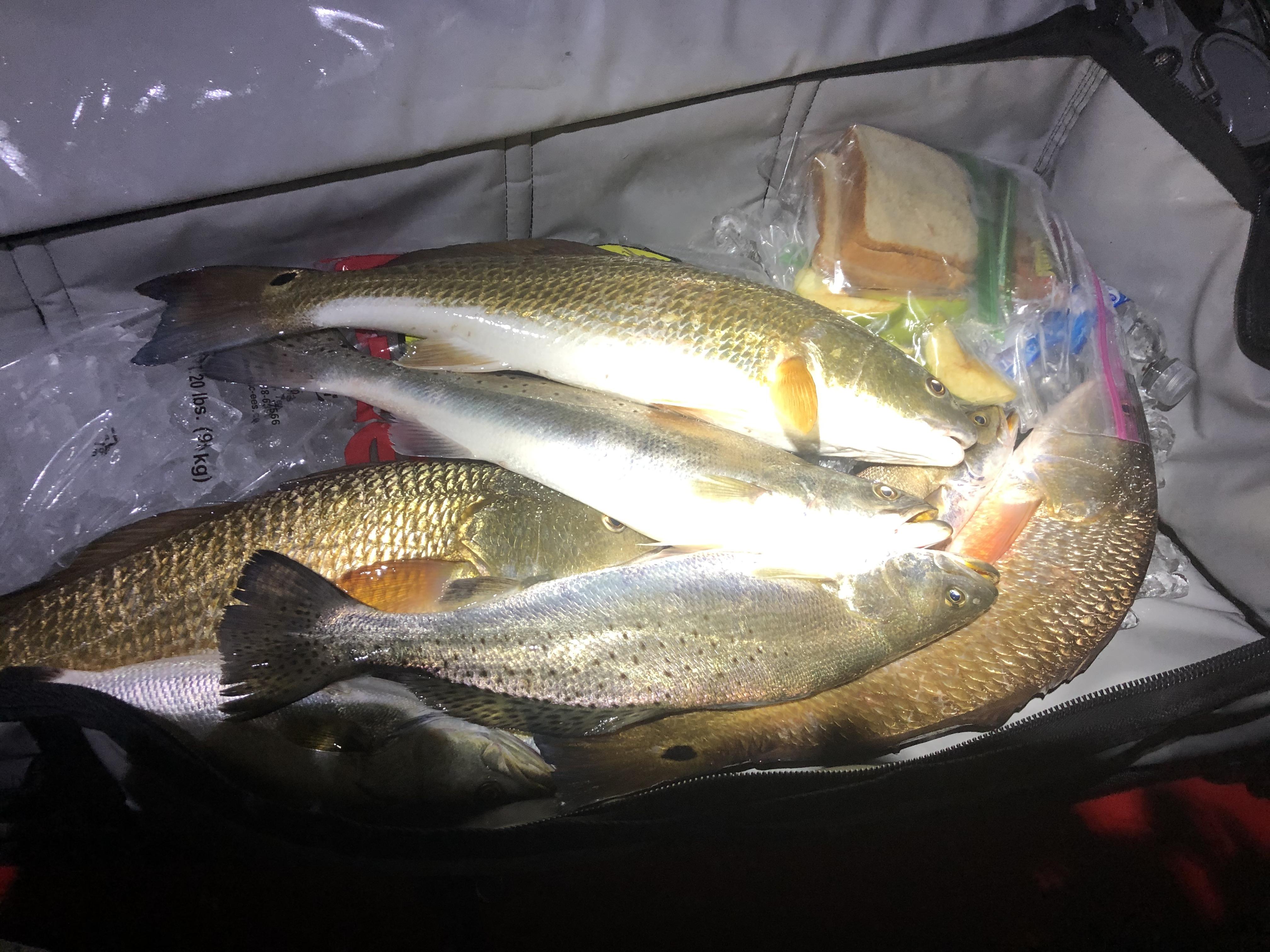 After packing, I headed to Buc-ee's for some coffee (Hardly anyone was in there. I brought plastic gloves so I would not come in contact with anything.) 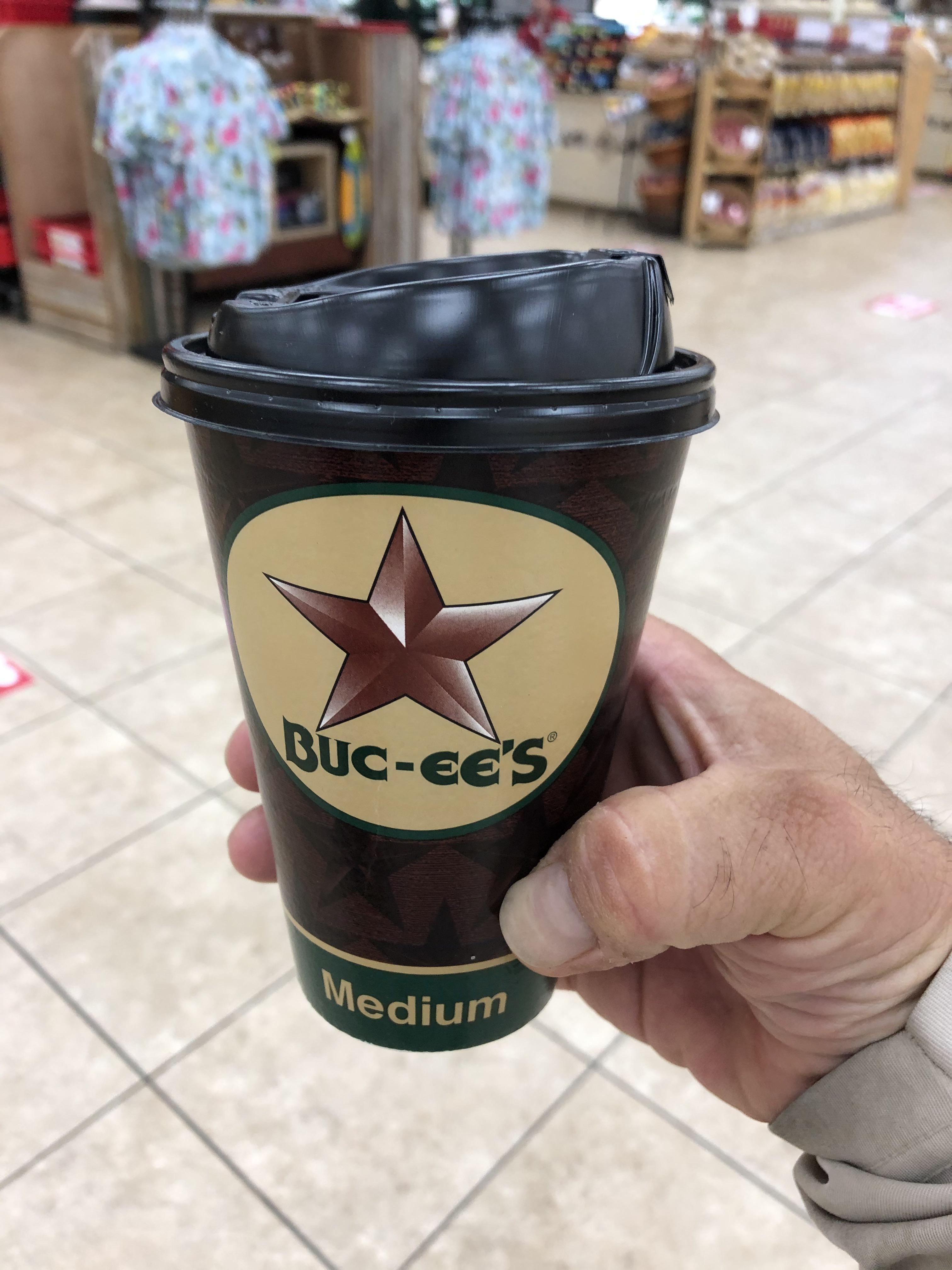 After getting some coffee and some ice, I checked to make sure the straps were okay on the yak before heading back to Houston. 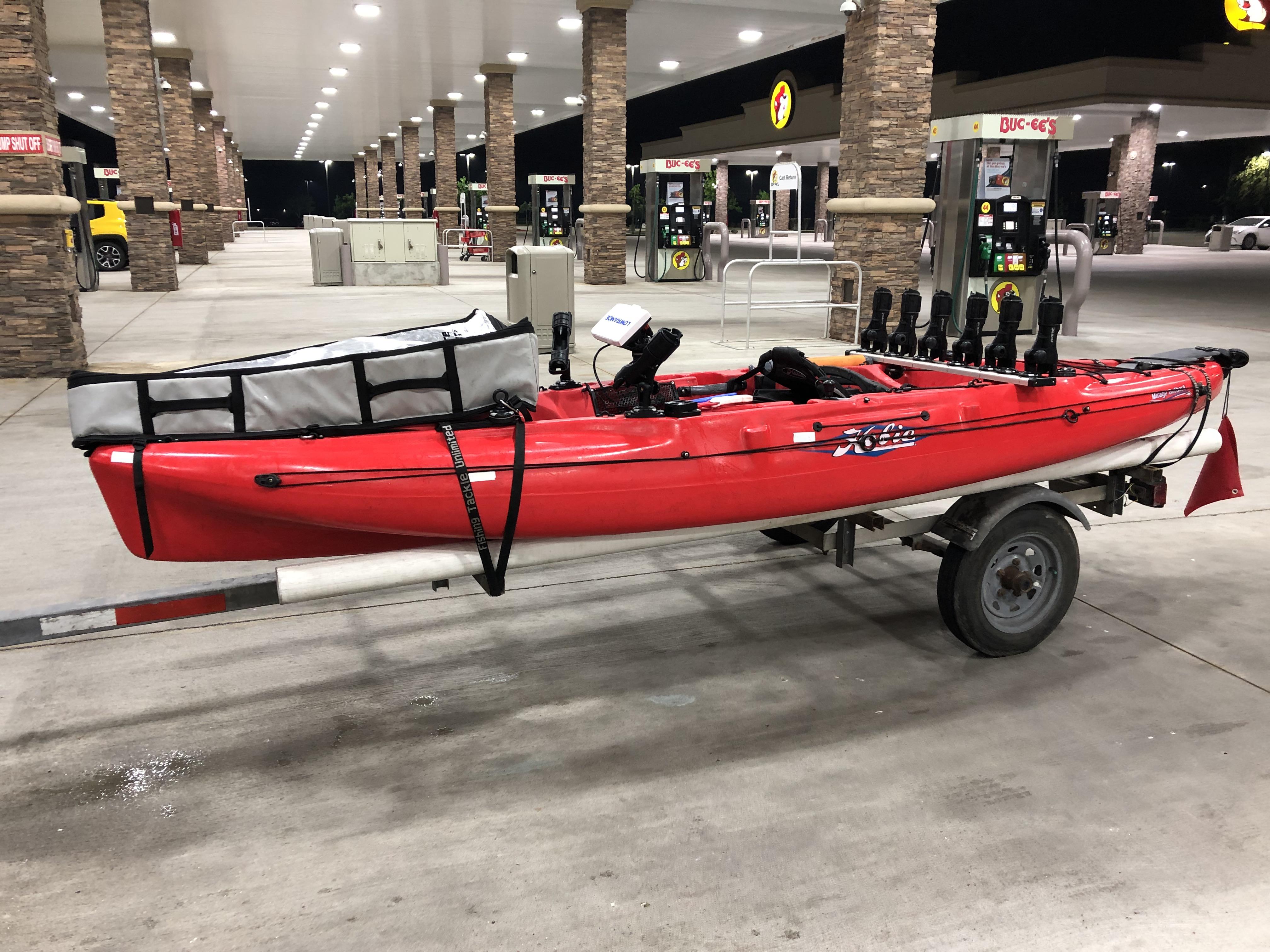 Once I made it home, I took a quick shower and went to bed. When I woke up, I went to go clean my gear and fish. 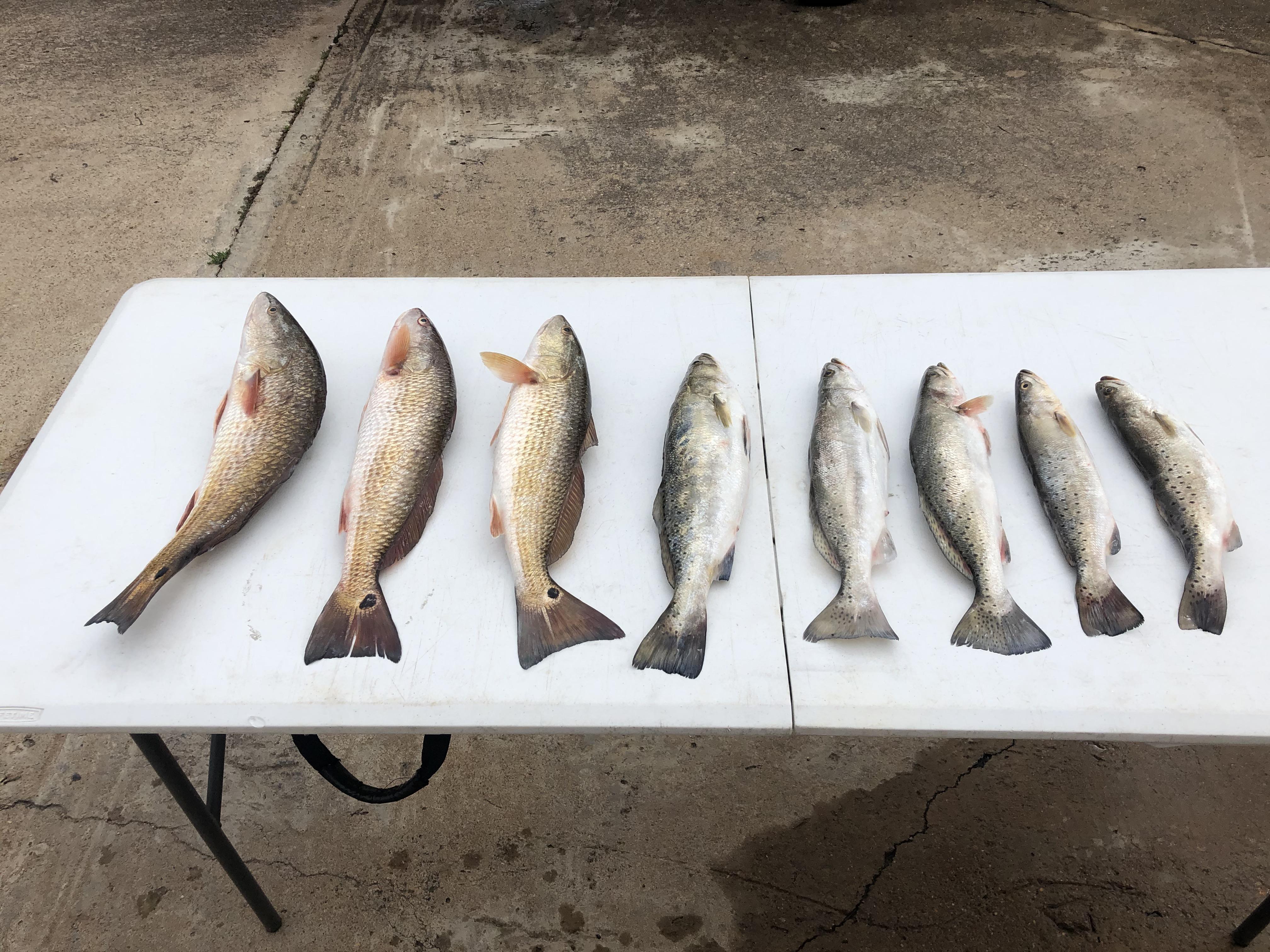 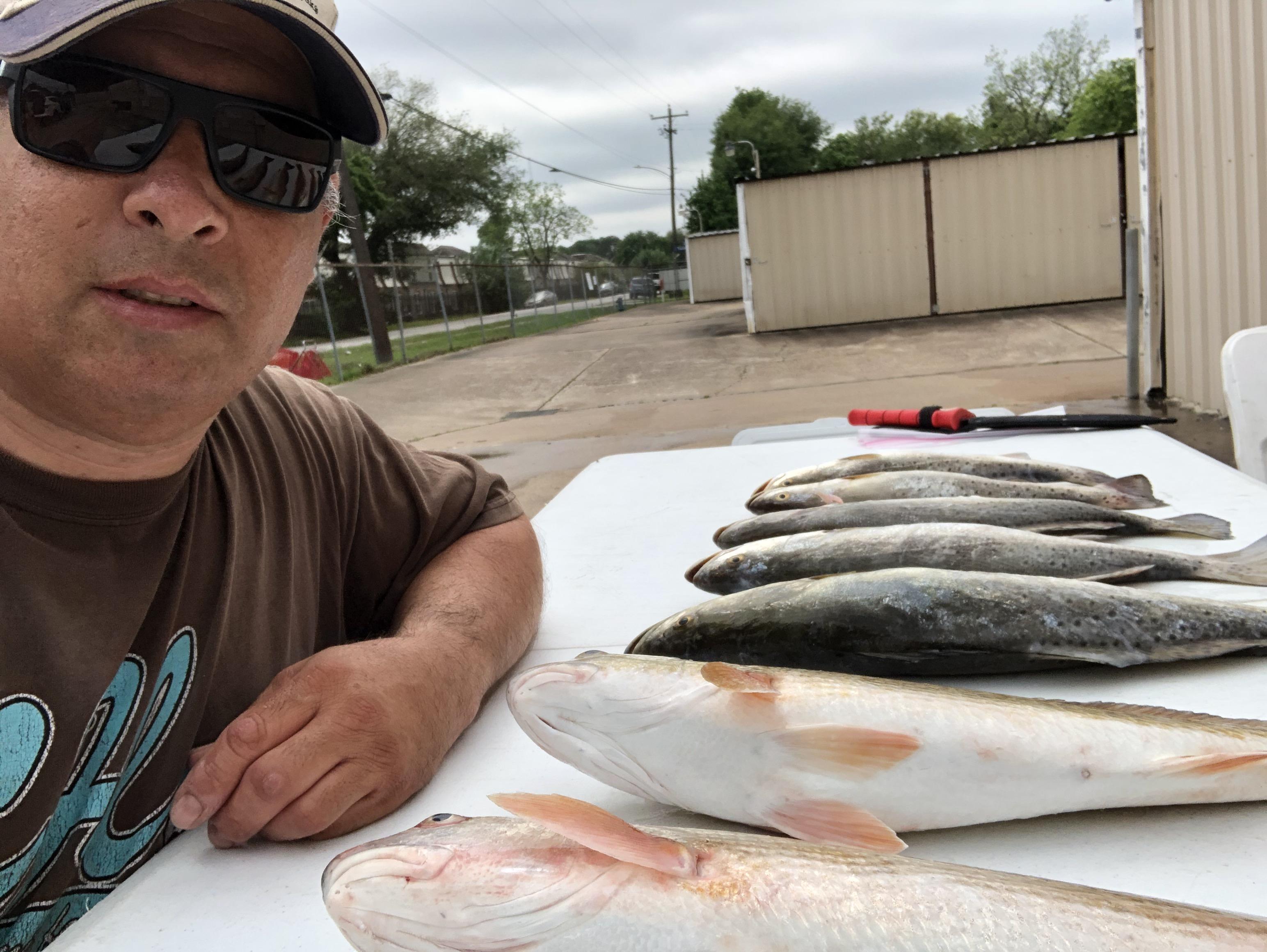 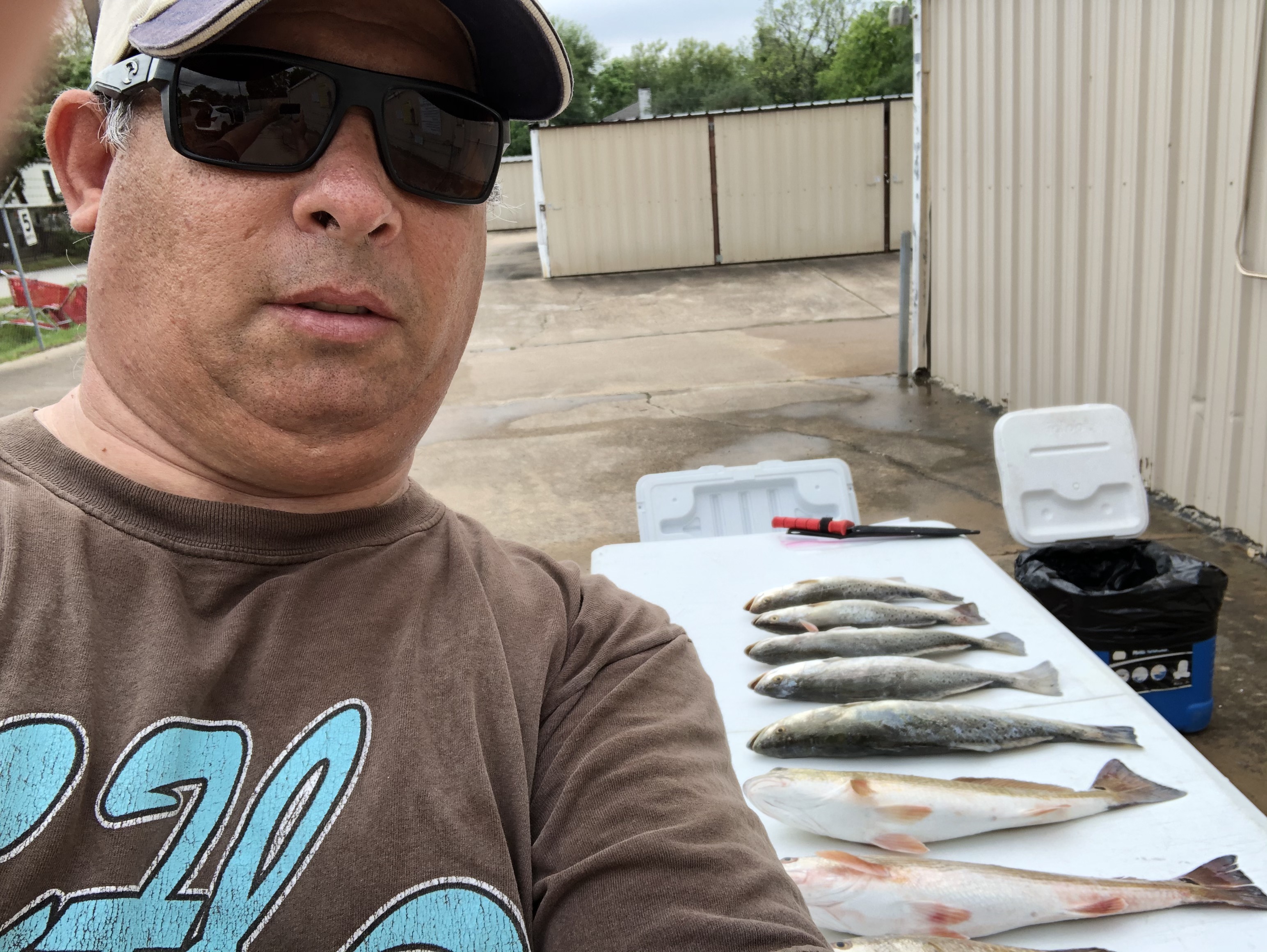 In this next pic, this shows one of my smaller reds compared to some of the trout I caught. The trout were big and fat!! 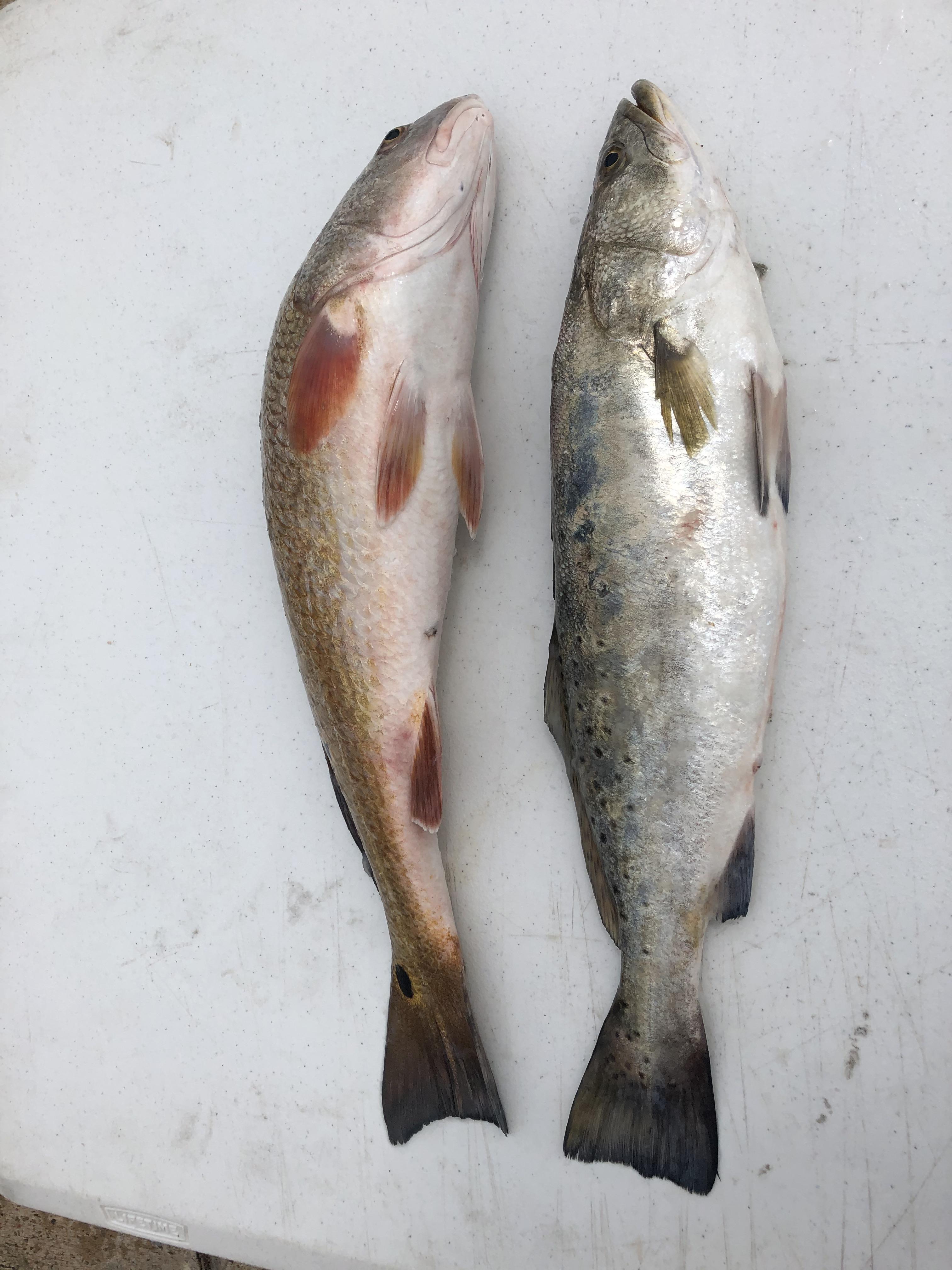 I told my wife I would cook dinner so I did. As you can see, there was carbs and more carbs (except the protein the fish had to offer, lol.). The family enjoyed the fish as did I. 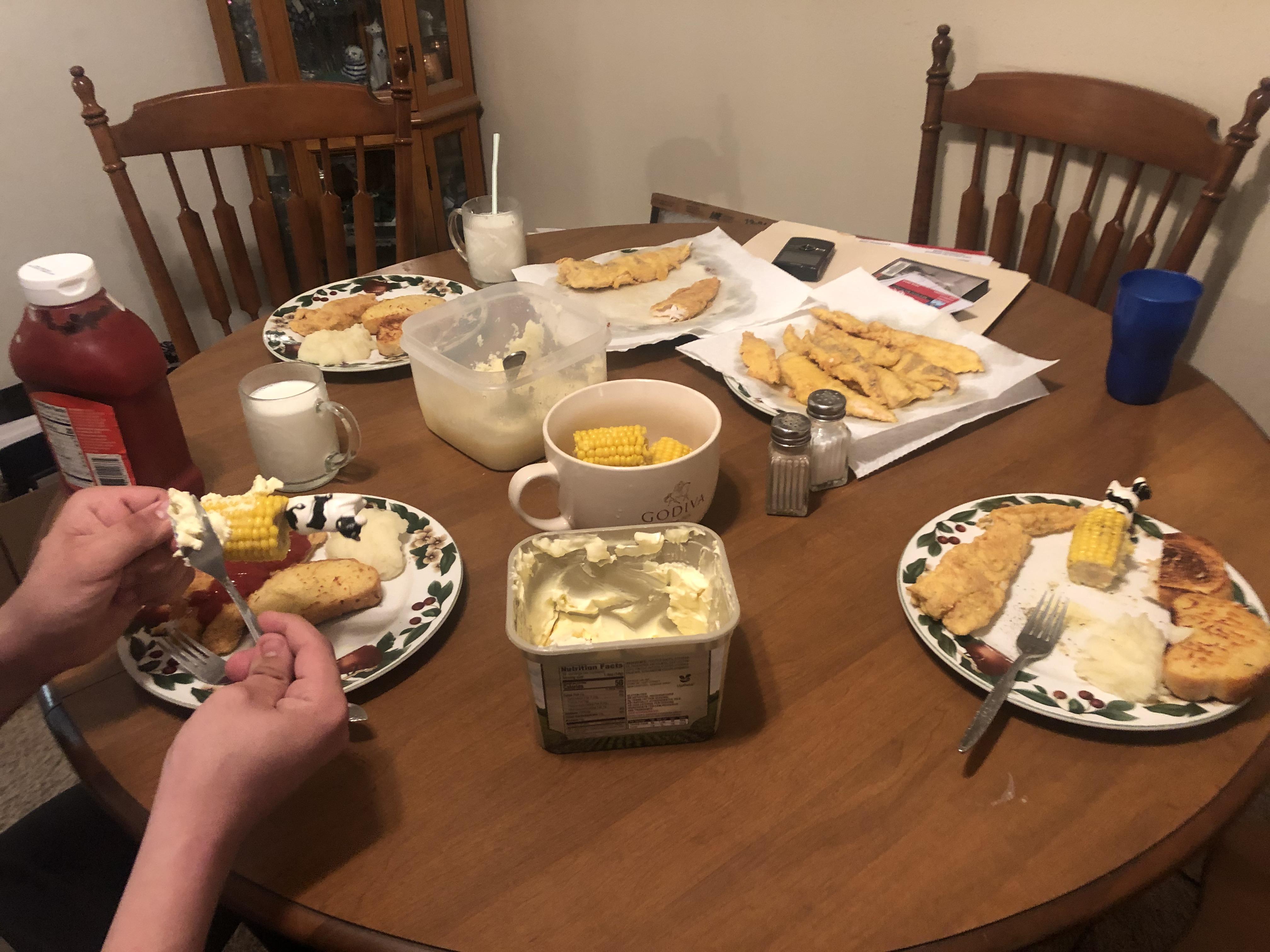 Thanks for reading and tight lines!!

How long were you out there?

Did you spider rig your 6 Rods??

I can confirm the standard of 6 rods on your outings, though I have not seen the spider deployment in person. I don't think that would work too well when you have fat trout and running reds active and feeding - I could see multiple hook ups with these fish that run all over the place - what a tangled mess that would be!

I could never catch reds at that bridge!
Confusing report at first with the pictures of Conroe and you report having 6 rods out for reds? Give me more details on how you can spider rig for reds when those hard fighting fish bite and get tangled in the other rods...and it will happen spidering for reds!!!

What lures/bait were you spider rigging reds with? Did you get any tangles? Where in Galveston did you go if you don't mind me asking.

Chubs wrote:Nice report Blake! That trout is a football!

How long were you out there?

Did you spider rig your 6 Rods??

The trout were huge! I was out there until around 2:00 pm ish. No spider rigging on this trip.

kickingback wrote:Where in Galveston did you go if you don't mind me asking.

That is the $1 million question. lol

Any trip with a keeper flounder is great for me! W[…]

Gotta love when the surf is calm! Sent from my S[…]

Good job! I too just recently got back in the yak […]