By OldTownYakBoi -  Mon Nov 23, 2020 11:42 am
-  Mon Nov 23, 2020 11:42 am #2312491
Gentleman, I hope all of you have been able to get out and enjoy some of this beautiful fall weather Mother Nature has provided us over the past month. The cooler temperatures seem to please everyone, especially the gamefish. I would like to share a few pics of a trip that didn’t make it to a report. Below are some pictures from a trip on Halloween night in the marsh. I brought a buddy along with me and fished the marsh under a full moon. We had a blast, catching here and there with a few keeps. The sunset was amazing and the weather to match, around this time temps had just dipped to the lower 70s. 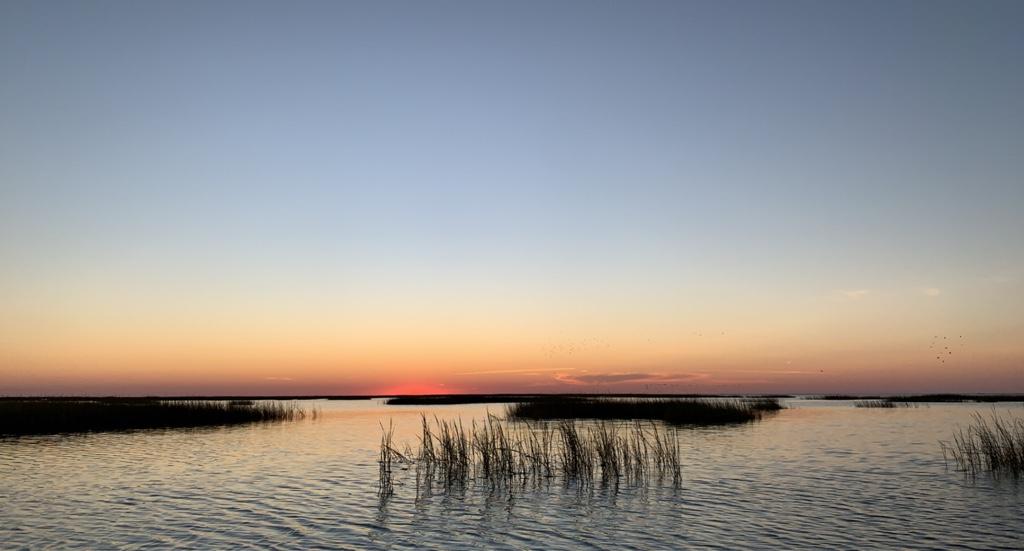 I wasn’t able to capture it but at the same time the sun was setting a full moon was rising in the West and on the horizon appeared blood red. While I was busy searching for another keeper red my buddy was just relaxing taking pictures. 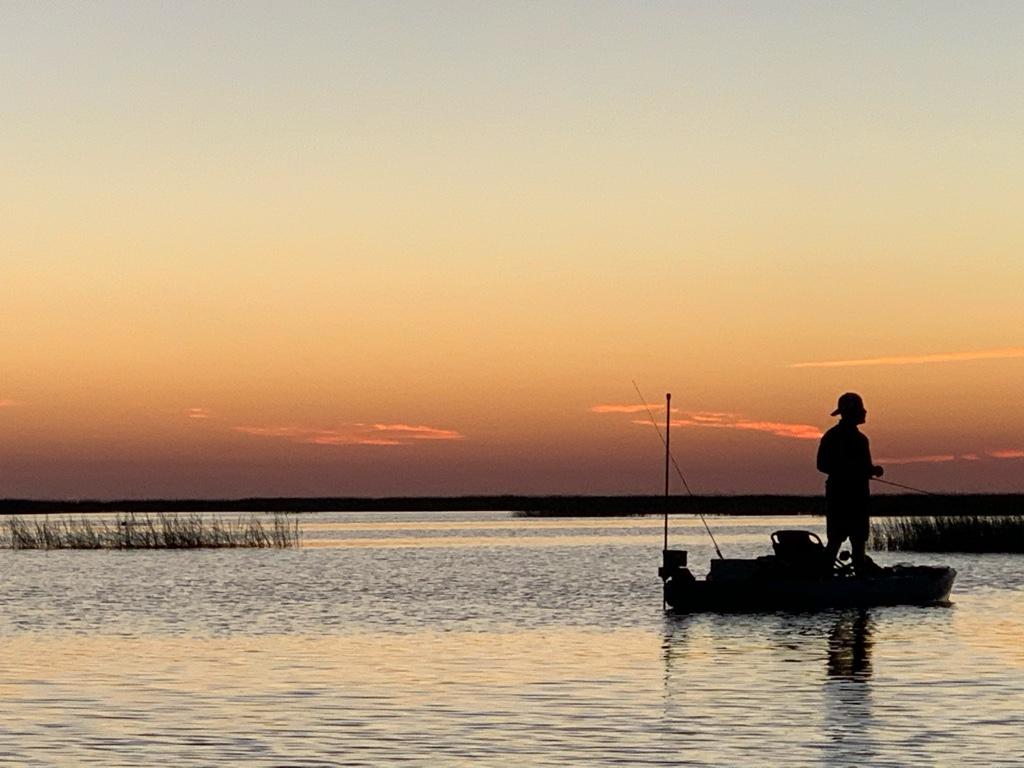 He was blown away at the beauty and that alone made this trip.

On to the actual report
11/22 Galveston West Bay

I met my dad at the launch early and was in the water by 6:45. I had an area in mind that I wanted to work so we headed straight there. On the way, there were fish signs everywhere and bait was plentiful. A far cry from the last number of trips I’ve taken. We both worked too waters to start without a bit of interest for 45 min. We both switched to soft plastics and started getting some interest. I picked up a rat red and he a skinny 15 in trout. After that the fish seemed to move areas so we did to. We fished another point finding limited success. I caught 2 small keeper trout and a handful of undersized. My dad catching a couple more dinks. We decided once again that we needed to move if we wanted to find some good fish. At this point I was a little agitated, but still confident there were some good fish in the area. Upon arrival at the last area we had a double up on trout, I pulled up a thick 18 in and he a 14. We worked the area hard and he caught another few keepers, I picked up a slot red drifting over shell. All in all it had been a good morning, but as quickly as the wind died so did the bite. My dad called it a day, but I wasn’t ready to go in yet. I couldn’t go in with the amount of bait I saw, it could rival most any spring or summer day. So I peddled around back into the marsh just looking and watching for about an hour. I saw mud minnows and shad stacked up everywhere. About an hour later the wind picked back up and I returned to the same area. Sure enough the fish were actively feeding again. I picked up a rat red on a long drift and got a number of short bites. As I was drifting near a drain I got a backlash. Once I sorted it out I felt tension in my rod and before I knew it had a fish pulling drag aggressively for about 3 seconds before getting off. Pretty bummed about it but what can you do except to keep fishing. Well about 3 casts later I got a solid thump on my lure and set the hook hard, I immediately knew it was a good fish. Within seconds I had a doormat sized flounder surface, head shaking like the craziest of trout. I didn’t give him a moment of hope, my drag was tight as I was anticipating a large redfish. I whooped his butt and had him in the net in no time. Before I even measured I knew it was my new PB. Since I was alone I wasn’t able to get a good pic on the water, but here is one right before I cleaned it.

23 in. Flounder, a new personal best 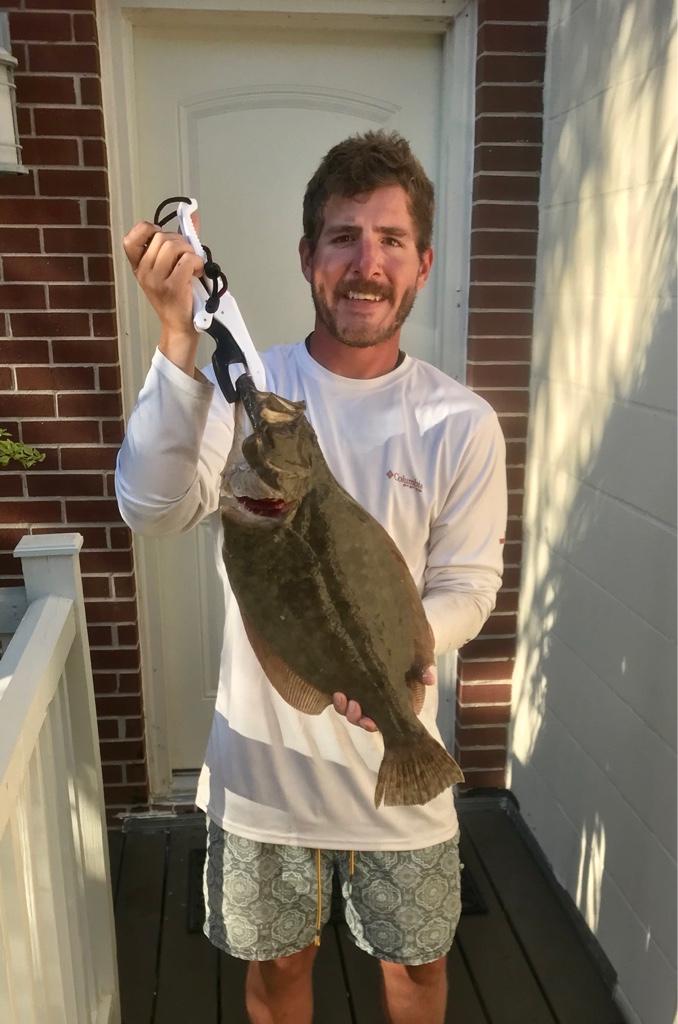 The day was as good as it gets and to me it personifies fishing. You can have all the right gear and be in the right area, but to catch those monsters that everyone wants to catch you really just need some perseverance and confidence. This is a fish of 1000 casts and I can’t wait to throw 1000 more in hopes to grab another like this.

Observations: Wind was everything on this trip and seemed to control the fishes appetite on command.

Ron Mc wrote:VERY nice photographs - thanks for the report.

Now that's a report! Thank you for posting and sharing. Pictures make the report even better! Good job on the slam!

karstopo wrote:Very nice, enjoyed you taking us along and the photos.

Thank you, Glad you liked them

kickingback wrote::clap: Now that's a report! Thank you for posting and sharing. Pictures make the report even better! Good job on the slam!

Thanks for the kind words. It was my first Texas Slam on the yak! Who would’ve guessed the biggest one of the bunch would be the flounder

Sent from my iPhone using Tapatalk

Kayak Kid wrote:Great photos accompanied by excellent report. Thanks for sharing such an outstanding trip.

Thank you! I couldn’t be happier with the trip. Glad you you enjoyed the photos. Our bays are beautiful

mwatson71 wrote:Excellent report and fantastic pictures. After reading your report I may just stop writing. That was really, really, good.

Thank you for the kind words. I’m glad you enjoyed the report. Like Ron said, please don’t do that. I thoroughly enjoy reading reports from other members, including yourself. The number of reports is already dwindling.

Seems that TKF is running low on fishing reports, something I hope to fix soon when this weekend rain clears out. As for Capt. Watson, I expect he'll continue to contribute good reports because it's in his blood and he cannot fight it. Let's go get some.

See you on the water, men!

Dandydon wrote:As usual, terrific fishing report with information useful to all, Yak Boi. Congrats on that big PB Flounder, a tasty reward for all that on-water work!

Seems that TKF is running low on fishing reports, something I hope to fix soon when this weekend rain clears out. As for Capt. Watson, I expect he'll continue to contribute good reports because it's in his blood and he cannot fight it. Let's go get some.

See you on the water, men!

Thanks DD! I eagerly await a fresh report from you. We could all use a little more fishing in our life, the reports are a nice substitute for those who can’t get out