Before September 11th a friend of mine, Pete, and I talked and it was decided that we would go fishing. I told him I was thinking of hitting the first rig out at Matagorda. He had never been there before and I had the 4x4 to make it down the beach. Pete and I agreed to meet at my place and he could roll with me. Saturday morning was here and we loaded up the truck and trailer fairly quickly and away we went.

I live in Katy, just outside of Houston, and headed toward Brookshire to take the back way to get to highway 59. From there it was just a few miles before we hit Buc-ee's. Once we arrived at Buc-ee's, we went in to get some ice, food, and coffee. While we were parked, we checked our straps to make sure everything was strapped in correctly and still holding. All was well so away we went to the last hour of our trip.

An hour later and we arrive on the Matagorda beachline. From here it was just a few miles of some tough and deep sand. If you ever think of taking this trip, be sure to have a really good 4x4. I would consider this beachline worse than the PINS beachline. After going down the beachline, we parked it and prepared for our trip to the rig. The surf was non-existent. We were excited and ready to get to fishing!

After we walked into the water and jumped into the kayaks, away we went. Since there was no surf, we just paddled very casually. Because of the low tide and the sand bars, I didn't deploy my fins until after the third/fourth sand bar. From here, I waited until 10' of water then I deployed my ribbon fish lines. I was trolling two rods. Both of the reels I was using are Seigler LG reels on a Tiger Stik rod. Nothing was caught going to the rig but once we got there, bait was jumping throughout the entire day at this one particular rig. It was non-stop constant action. I believe the first fish was caught by Pete. He had a heck of a run and it took forever for him to get it up. After a great fight, Pete managed to land his personal best bull redfish (35.5"). Pete was happy and it was definitely a great fish for him to catch. 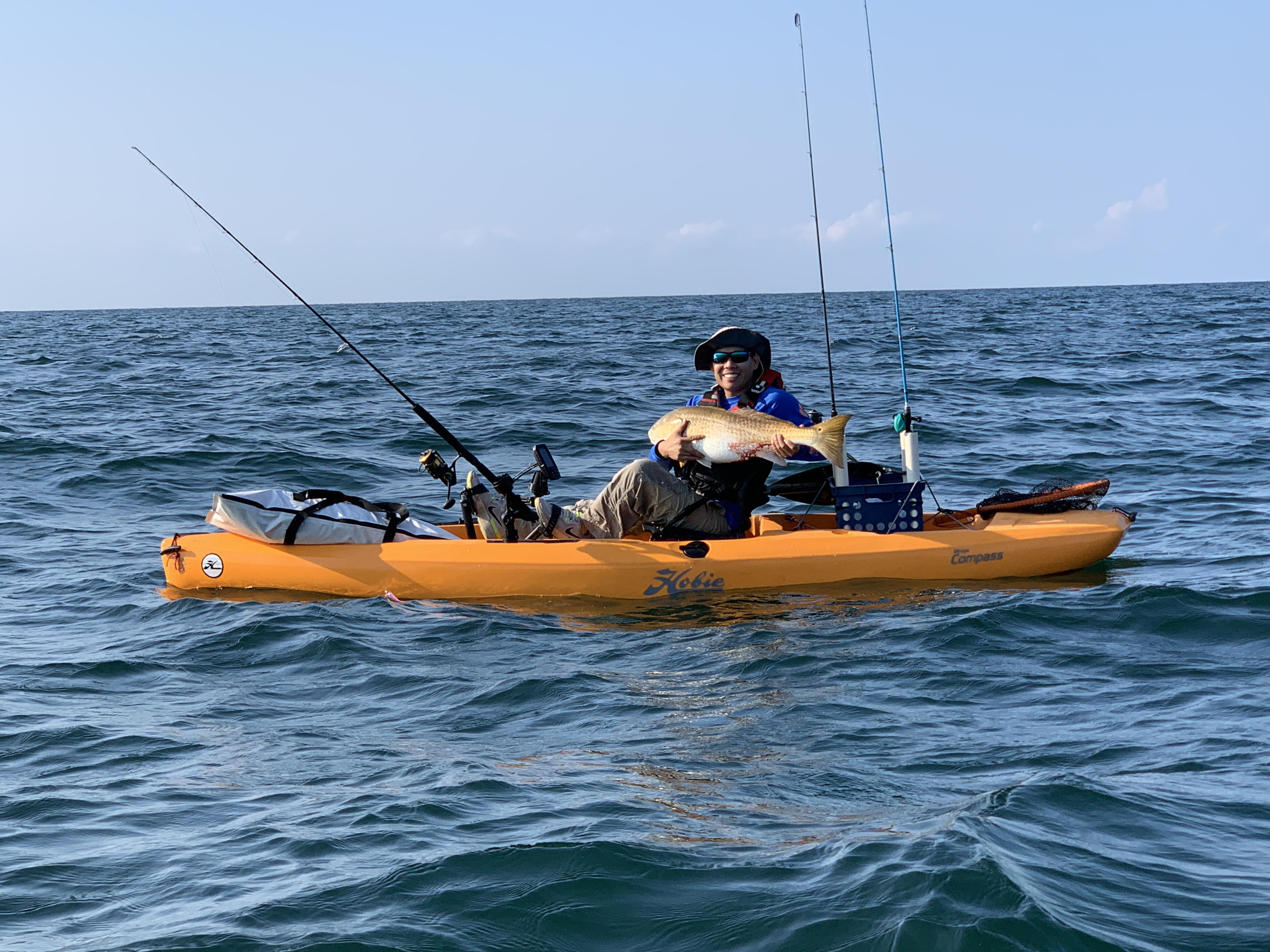 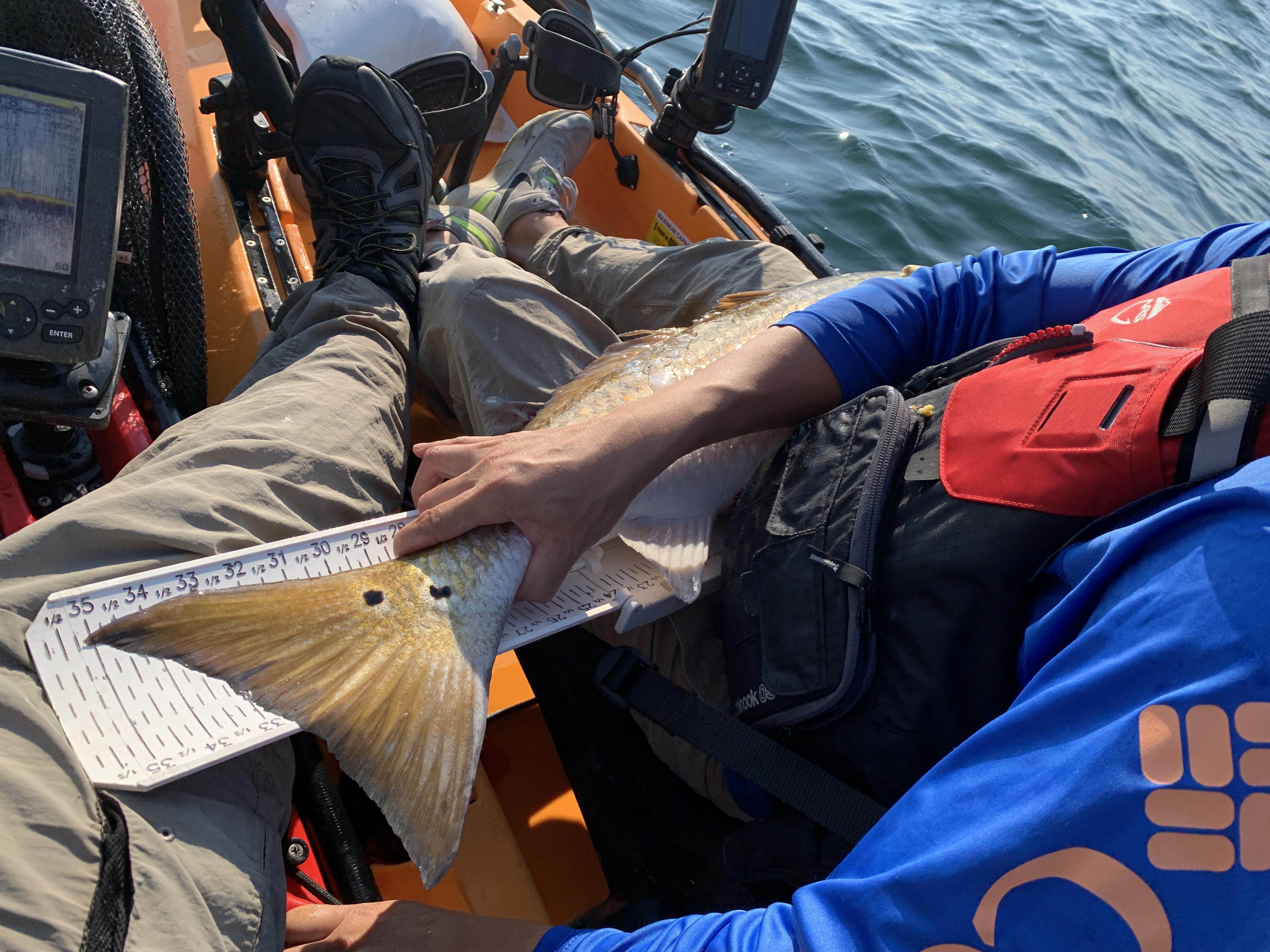 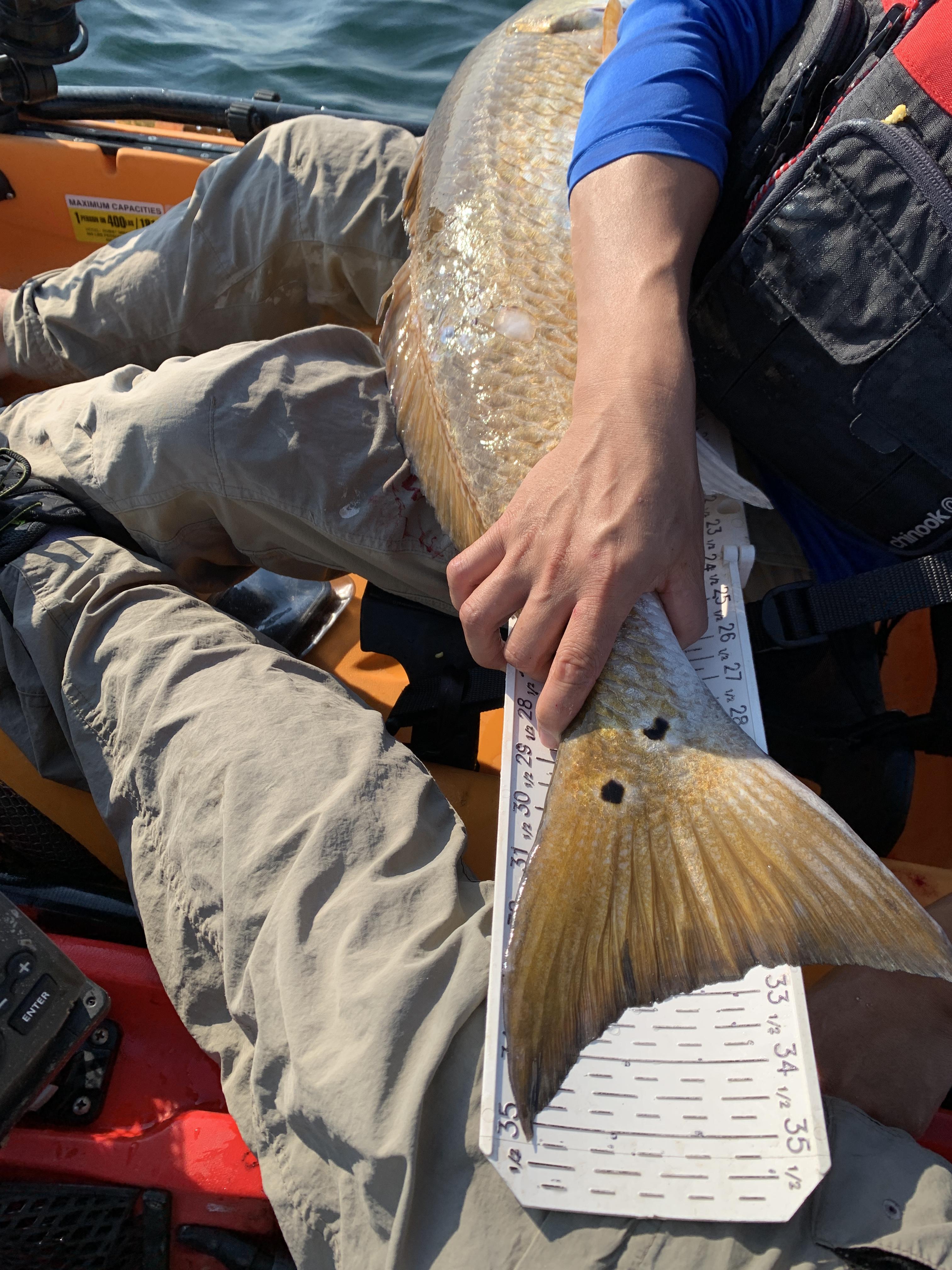 After landing this fish and releasing it, Pete rigged up again and was back at it in no time. I eventually hooked up to a 2.5' skip jack (lady fish). This thing gave a fun ariel show multiple times as that is what they do. After a fun fight, I landed the fish. I quickly re-rigged up and back to fishing I went. Pete hooked up to what I believe is called a hound fish. This fish is very skinny, like a ribbon fish, but has a slightly neat look to it. 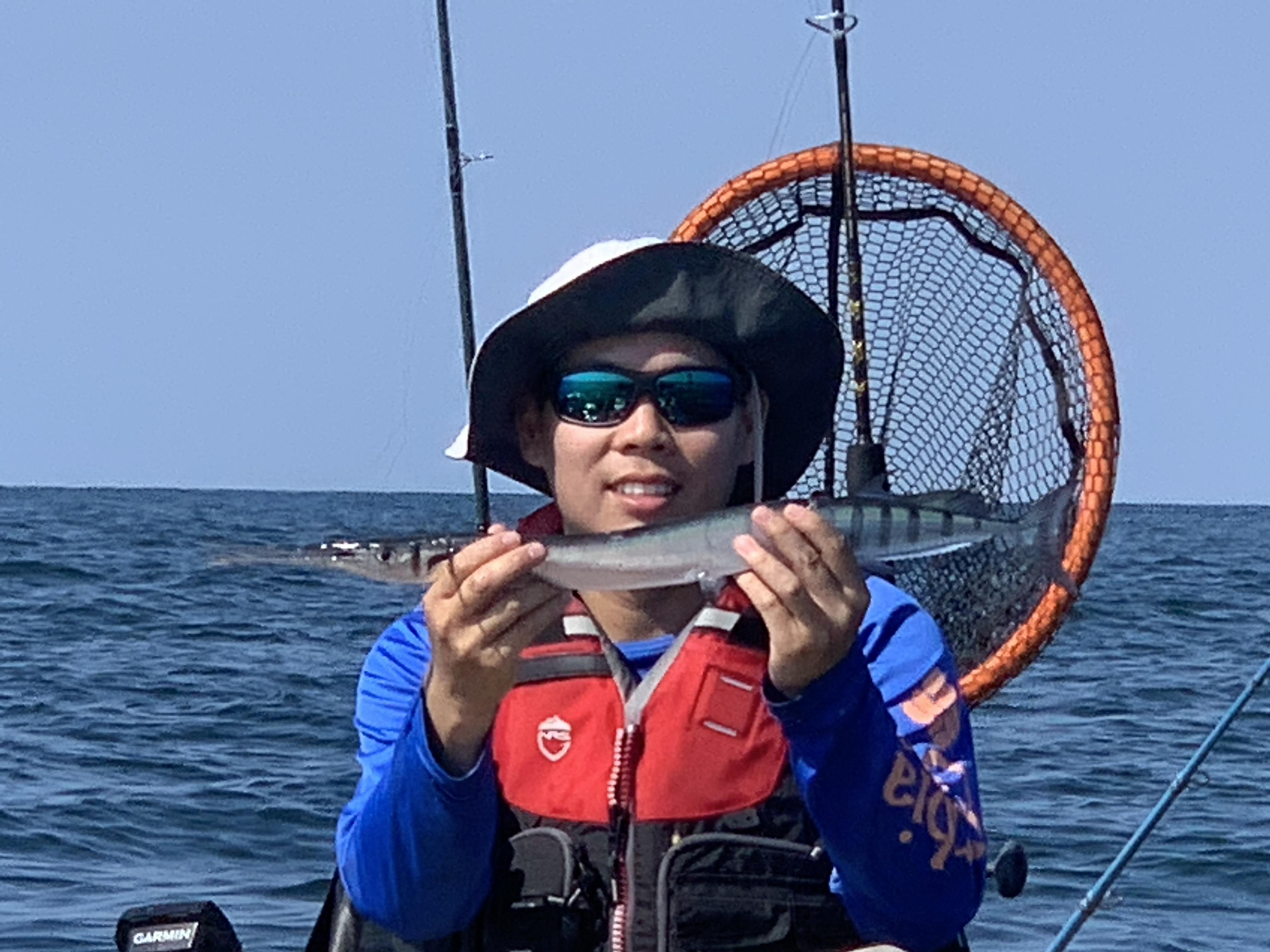 As the day progressed, the bait in the middle of the rig kept on doing its thing and the fish stayed near it and kept on trying to ambush it. Unfortunately for Pete and I, we didn't see as many smacks as we were hoping for. Pete caught the only two smacks of the day between the two of us. Both smacks were keepers. At one point, I even hooked into a 6'+ blacktip shark of which I managed to get in and cut the line. Toward the end of the day, I decided to verticle jig right up against the rig. It was like a fish highway down there when looking at the water. The water clarity was excellent! Many fish kept on cruising by. At one point there was a fish that went right next to my jig. At first I thought it was a shark and pulled my lure up a little to avoid contact. As I took a closer look, I then realized it was a cobia (aka: ling). I dropped my lure down again in hopes the cobia would go after it and then that is when I noticed a second cobia hanging with the one I was trying to catch. Immediately the cobia took my lure in and shook its head to try and spit the lure. I pulled back on the rod to set the hook and that is when I realized something. I had this cobia on my inshore rod and reel. The lure I was using is a Tsunami Slim Wave. My rod specs are a 7' All Star Classic medium action. My reel is a Pflueger Trion 40 (freshwater reel but it has great drag). I originally was using this setup for smacks and my sabiki rig. I thought to myself that I will either get spooled or my rod will break. My line was 20 lb braid with a 20 lb flouro leader. I knew I might possibly get this fish in but I couldn't horse it in. I first had to figure out a way to get it away from the rig so it wouldn't break me off. Next, I slowly fought this fish until I had it at the edge of my kayak. When I took out my night night stick and hit it a few times, the cobia got mad and took a dive and the fight was on once more. This kept on happening for about 45 minutes before I finally had this fish asleep and on board in the kayak. While this was going on, Pete kept on throwing different things at the other cobia to persuade it to come to his line. The cobia never abandoned his post and stayed with his buddy. After awhile, I began to get concerned that the cobia I had on the line would spit or bend the hook out of its mouth, break the line where my line to line knot is tied, or something else that would cause me to lose the fish. Pete gave up his efforts and I finally got the fish in. What a cool fight! I think the reason I was so successful on getting this fish in the yak on a inshore rod and reel is that it was a full moon the night before and I think the cobia was too full from eating all night to give the fight that a cobia is capable of giving. Either way, I had a keeper cobia in the yak. The cobia measured at 41". 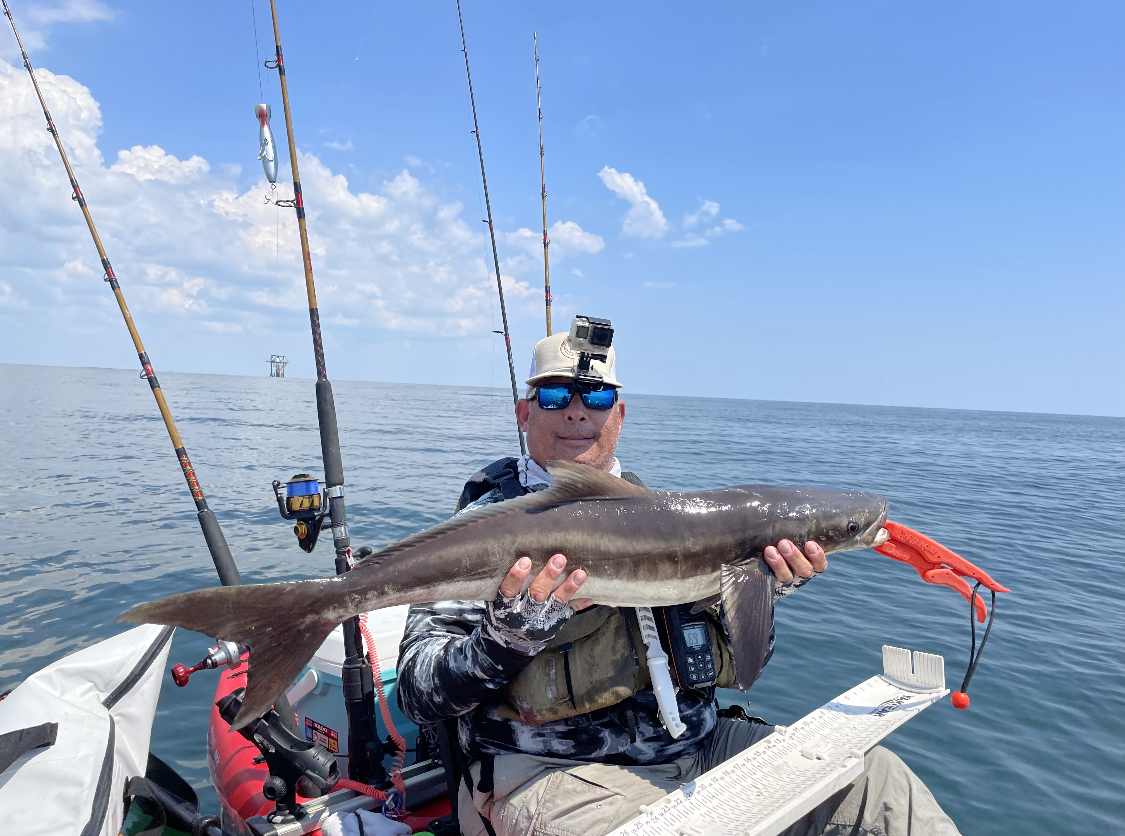 After the cobia was in the fish bag, Pete and I started to pack up and head back to shore. We had a fun day. As the day progressed, the swells lessened to non-existent. That was a nice treat for us. As we got back to the surf zone (what surf zone, lol), we made it in with no problems. We took a few pics and then packed everything up in the truck for the trip back. 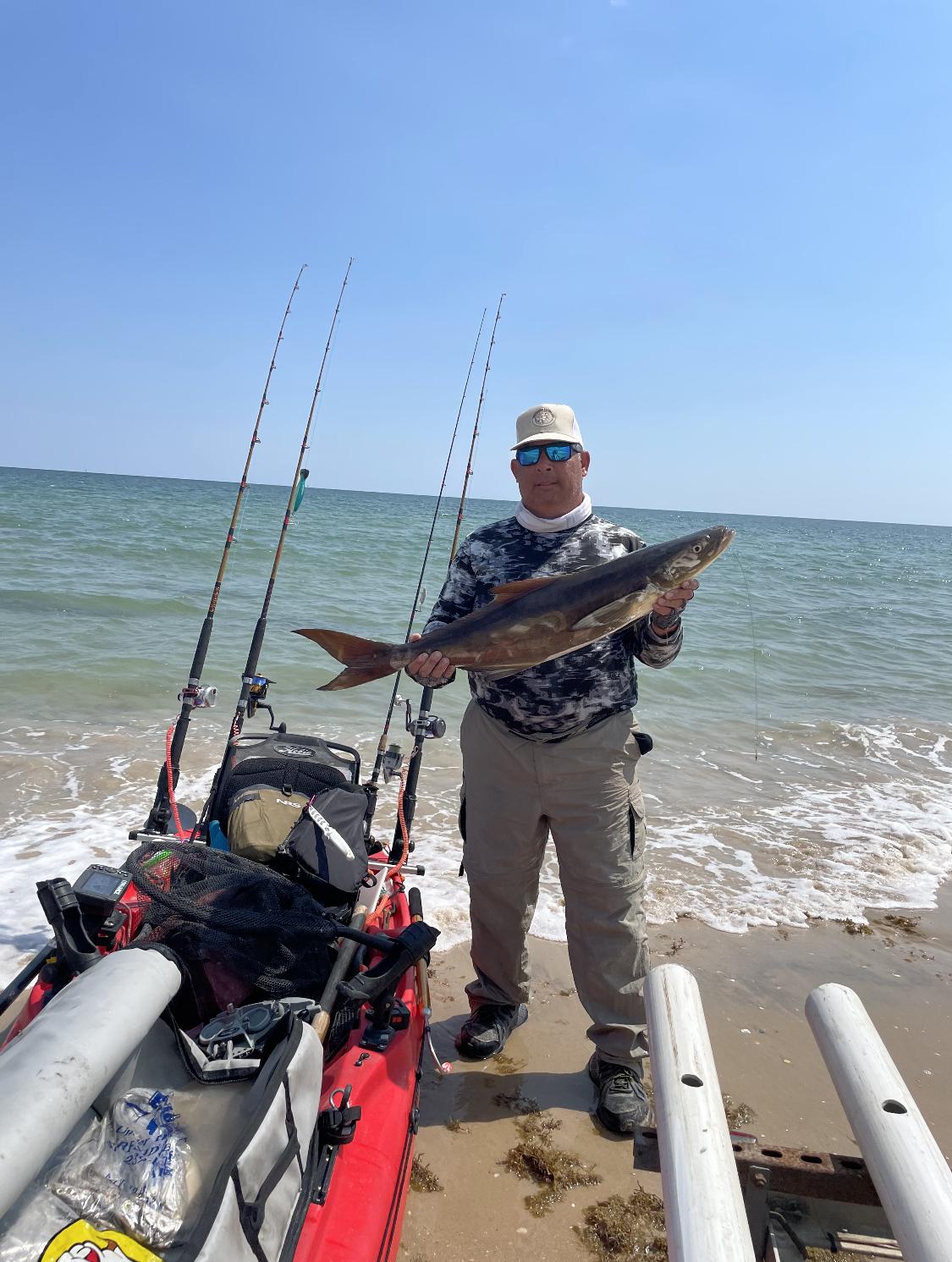 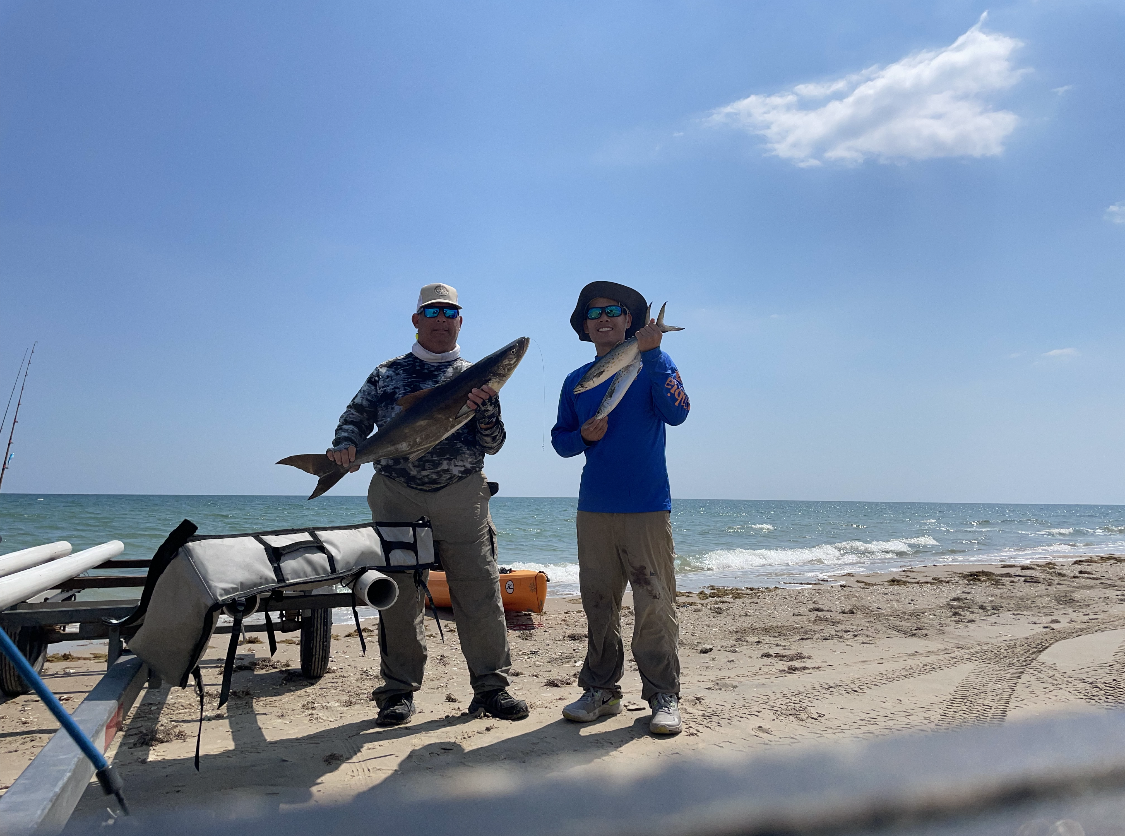 The air temp was around low 90s and the water temp was in the mid to low 80s. There were no bait balls boiling on top anywhere to be found except at the rig. Pete and I capitalized on this trip and had fun. Thanks to KillerBee for letting us know about the fishing there. He fished there a few days before we did. That's why I decided to go fish the Matagorda rig and not Corpus. Plus, the drive to Matagorda is only 1.75 hours for me and Corpus is 3 hours. Less driving was definitely a plus. Thanks everyone for reading. Have a good one and tight lines!
Top

I enjoyed that trip with y'all.

The cobia was worth the long paddle.

Best eating fish other than triple tail and pompano.(IMO)
Top

Great job Blake! You always write up an excellent report! Feel like O was there with ya man!

Return to “"BTB" - Beyond the Breakers”