So I've been away from fishing for about 6 years (according to the last time I was on here). Since then my 7 year old son has recently taken a liking to fishing. I have a very, very small pond with a few crappie in it that I can count on 1 hand the times I've fished in the last 6 years. But recently we've really been having some fun. I picked up a couple used kayaks locally and he's very hooked on kayak fishing now. Found a Vapor 10 for him that isn't terribly pretty and a Kingfish 12 for me that's ok, both were only $100 each with paddles. Hey, why not. Gotta start somewhere. That's what leads me to this post. I sold off most of my fishing gear back then and don't have much now. Looking to restock the tackle box and was wondering on some favorite 'must have' lures to run out and pick up. I still have some slabs for sandies and most of my catfish live bait stuff. But my crappie/sunfish gear and bass gear is no more. Any suggestions on a handful of lures to toss in the cart? Mainly fishing smaller waters like around LBJ but hope to hit Lake Bridgeport later as he gets experience in the yak.
Top

Welcome back to kayaking. Man, I haven't seen a Mainstream Kingfish in a long, long time; one of the OG entry level fishing kayaks. The Old Town is very under rated as an entry level kayak too, very stable and surprisingly quick on the water.
Top

Onski326 wrote: ↑Mon Jun 13, 2022 8:27 am ,,,That's what leads me to this post. I sold off most of my fishing gear back then and don't have much now. Looking to restock the tackle box and was wondering on some favorite 'must have' lures to run out and pick up...

For fishing small water and panfish on light tackle, you Must visit here
https://baitfinesseempire.com/product-category/lures/
Many of the best lures from Japan with an onshore inventory.
Top

I'll have to look into that site. Honestly I'd just planned on running over to Cabela's or Academy. Both are less than 30 minutes from my place. Every time I go in there and the kids exit the aquarium, I get overwhelmed and the whole 'paralysis by overanalysis' syndrome and slowly walk on through. lol
Top

This is a loaner box for my spin fishing friends.
I made the single-hook spinners and barbell cats whiskers - the soft jig bodies came from Academy. 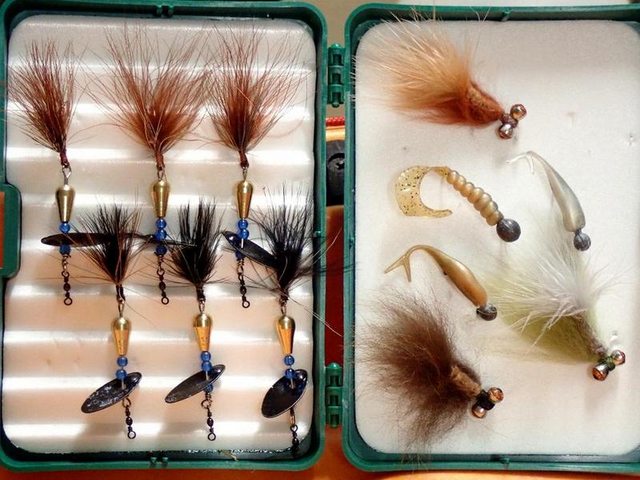 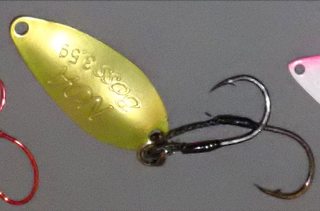 Ron Mc wrote: ↑Mon Jun 13, 2022 5:17 pm This is a loaner box for my spin fishing friends.
I made the single-hook spinners and barbell cats whiskers - the soft jig bodies came from Academy.

That's all for panfish/crappie tackle? Nice little selection for sure!
Top

For sunfish I like:
1/8oz Roadrunner jigs in white/white and chartreuse/chartruse
Rapala Ultralight or Rebel Teeny Pop-R in a frog pattern
Strike King Bitsy Pond minnow in chartreuse back/white body
1/8 oz Worden Roostertail in yellow, black, and gray minnow
I've had some luck with countdown lures such as Rapala or Rebel Tracdown

I've caught crappie with those lures, but it's good to have plain ol crappie jigs under a bobber. I've thrown Bobby Garland in shad patterns and electric chicken. I've caught quite a few crappie on crankbaits when I would reel the lure down and then stop to let it start floating up; most of my hits would come with the lure floating up.

You'll want an ultralight setup with 4lbs line and maybe a light with 6lbs line (I like Pline Fluoroclear).
Top


They work on river bass, white bass, crappie and bluegill.
But I actually put the box together for Guadalupe tailwater rainbows.
Top


They work on river bass, white bass, crappie and bluegill.
But I actually put the box together for Guadalupe tailwater rainbows.

Rainbow trout fishing in Texas...hmmm...I never got that deep in last time I got the bug to fish. That sounds like fun!
Top

I couldn't be more hooked on finesse tackle.
I'm a 48-y fly fisherman, and have caught well over 100 species on fly rod in rivers and salt.
Finesse tackle pretty much makes the fly rod obsolete for all except trout fishing moving water.
These are my hill country creek boxes - nothing in them weighs over 4 g, and just a few are over 2 inches long.
Sinking 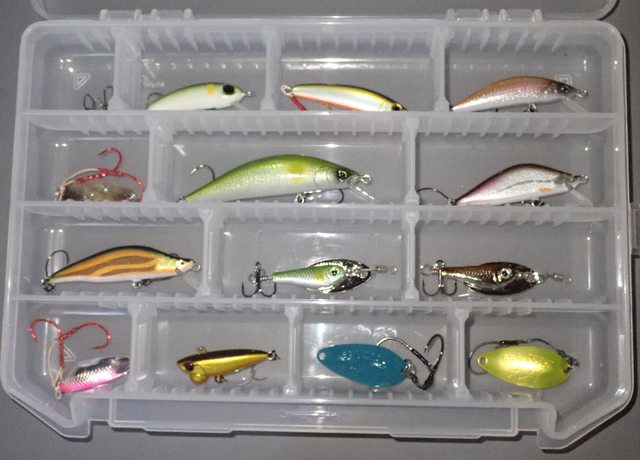 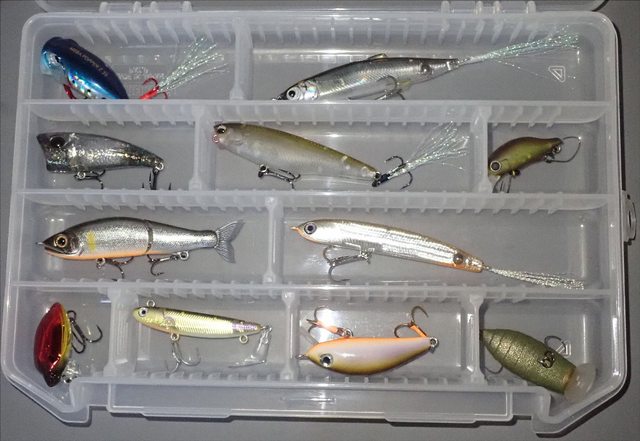 There are plenty of good lightweight soft baits, such as "Ned" mushroom jigheads for bottom-bouncing, and small minnows such as Z-man SlimSwim. 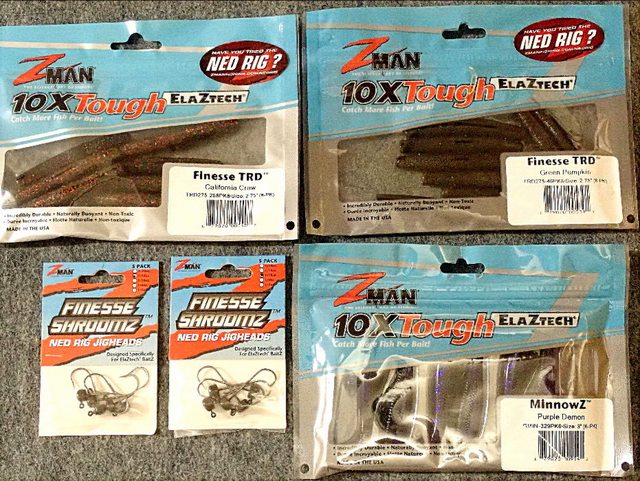 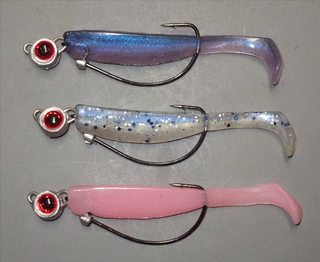 I don't quit there - nothing is better for imitating winter glass minnows at the coast (also nite-lite summer mullet).
Caught this 17" snook on a 38-mm, 2.8-g sinking plug.
He's about to hop off the table, and of course, went right back into the Arroyo. 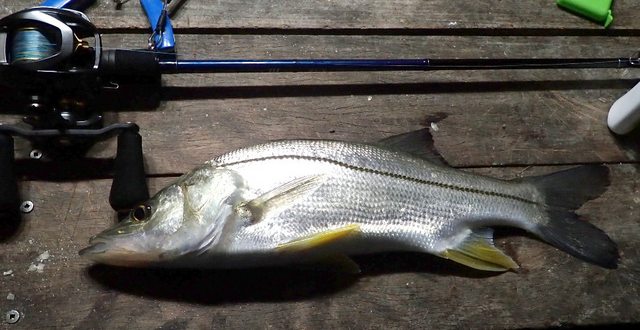 It was this pattern plug, except this is the larger 45-mm version that caught my first finesse redfish in a tide pass 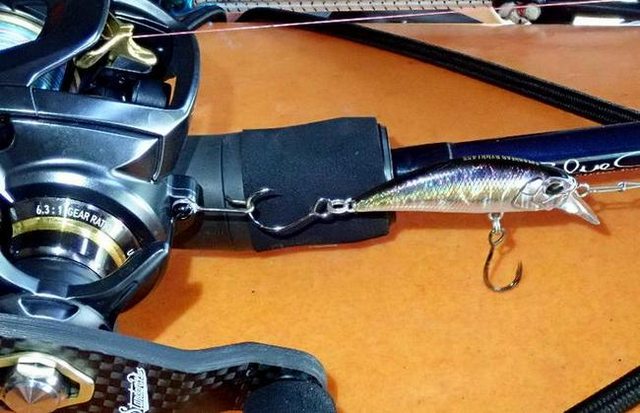 We also rack schoolie specs on them in the winter (every one is a male). 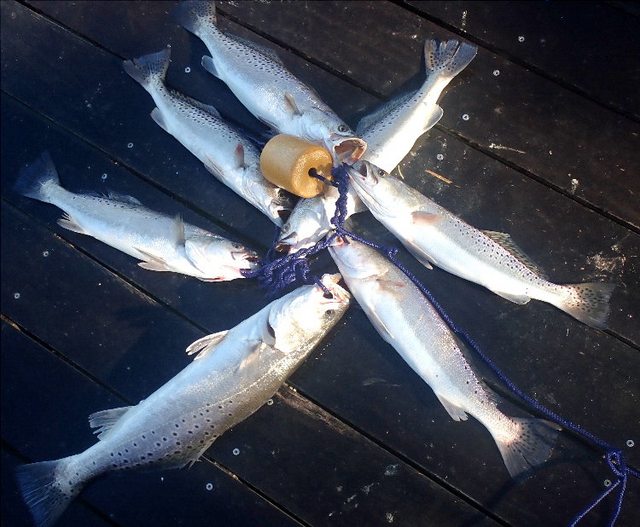 I'll admit I don't fish this light tackle from a kayak in the salt, but limit it to wade fishing in the day and nite-lite dock fishing 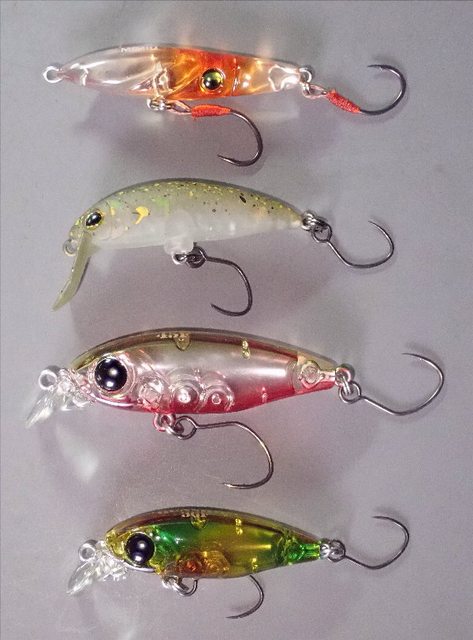 Magbite Mimiq slow-sinking pencil shrimp that makes me want to wade Fence Lake with UL right now.
Timon Buriburi glow floater/diver (wakebait) going into Arroyo glow finesse box (only floater in the box). We mostly prospect deep in the navigation channel for schoolie specs, but have seen times when their defense mechanism sent them to surface-only eats.
The bottom two are Smith Gunship floater/divers for sight-fishing reds in skinny grass.
Top
Post Reply
10 posts • Page 1 of 1

Return to “New to Fishing”