Fun in the mud

Fun in the mud

I had some fun pushing my way through very shallow muddy flats Saturday. I had covered a lot of Nueces bay after 10 miles of unsuccessfully searching for feeding fish, and was headed back to the truck empty-handed. About two miles from the launch I turned a corner and decided to check a flat that I had not explored in a couple of years. The area was really shallow (3-4" deep) but I was happy to see that redfish were visible creeping through the muddy water on the hunt. It is difficult to sneak up on fish so shallow because the kayak makes a faint scraping noise as it's pushed through the mud which is almost impossible to avoid - and redfish are very aware of that noise. I could look across the water and see several redfish with backs exposed as they slowly worked along, so I crept slowly towards the closest target. This fish appeared too big to keep, but I was there to fish so I pitched the fly just ahead and beyond the fish's nose. Two or three short strips later, the line came tight and began to run away from me ...but my redfish was still parked in the mud and laying motionless. Hmmm. After a minute or two I pulled a stingray alongside the kayak and netted it to get control of the tail before removing the hook. 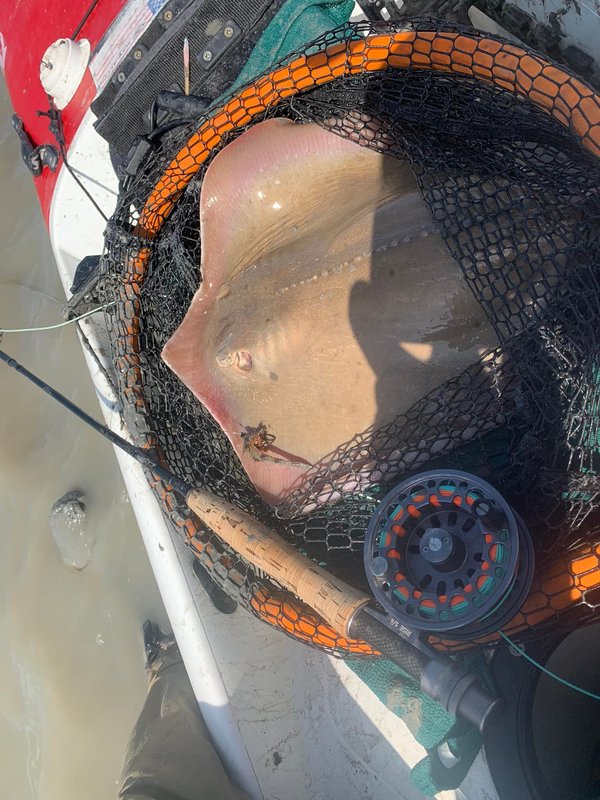 I got it sorted out and released the ray, and then re-located my fish now 30 feet farther away. After another slow approach I managed a decent cast and as the fly hit the surface it was instantly inhaled by the target fish. As it ran for deeper water the hook pulled. I was frustrated because the eat had happened so quickly that I didn't get a good strip set, but instead lifted the rod without thinking. Note to self: don't do that.

The next fish was another big one, but as I prepared to cast, it lurched ahead to attack an unlucky mullet, and disappeared from view. I sat still watching the muddy water and saw a very faint shadow nearby. Was it my fish? It didn't move for several seconds and then I saw a tiny puff of mud from behind what appeared to be the tail. Game on! The cast was on target and the fish smashed the fly. This time I managed a strong strip-set and drove the hook point home, so the fight was smooth until I got the fish into the net. 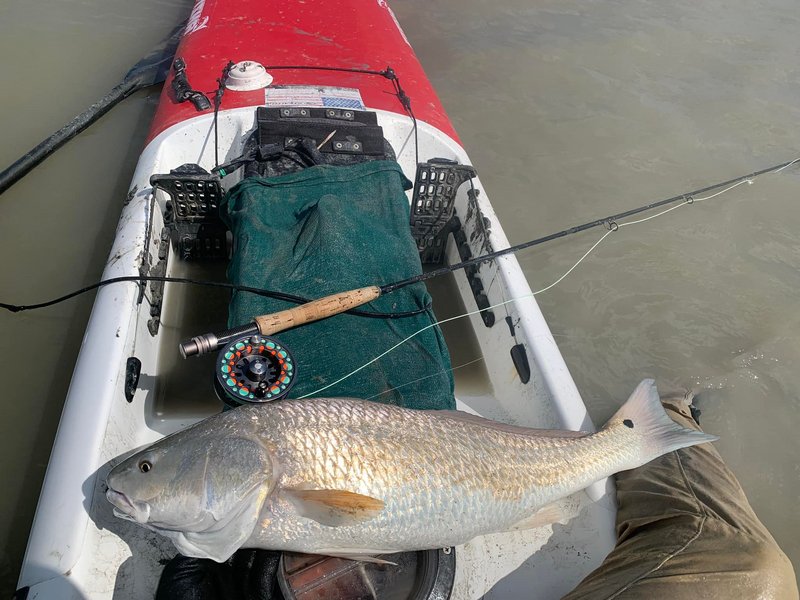 I was feeling better about the day and was happy just to finally see some action, but as I gazed toward the exit I could see several more redfish backs jutting above the surface. In the sunlight, they were very obvious silver arcs above a chocolate milk colored flat. I worked down the shoreline, pushing the kayak through the silty mud until within range of the next fish. This one was a big red pushing 30 inches and it was slowly meandering in no particular direction. I got positioned and waited for the fish to turn so that I could make a cast. When it finally happened, the fly landed about 6 inches ahead of the fish and with the first strip of line a shower of water and mud went everywhere as the fish took the fly and ran for the middle of the flat. I tightened the drag on the 6wt but still the line dumped off. As the last of the fly line left the rod, I got nervous as the backing continued to run out... there was a keen awareness on my part that $100 worth of fly line was hanging above the surface out there, attached to the backing with a knot tied months ago. I finally stopped the fish and quickly got some of the fly line recovered. Just before the shooting head came back onto the reel, the fish turned and ran again, and again it ran well into the backing. After that the fish wore down quickly and I was able to get the fish into the net. As I worked with it in preparation for release, the fish was sluggish so I decided to tag it and put it on the stringer rather than risk it dying on the flat and going to waste. It was a great day that reminded me that it's never really over until you stop fishing. 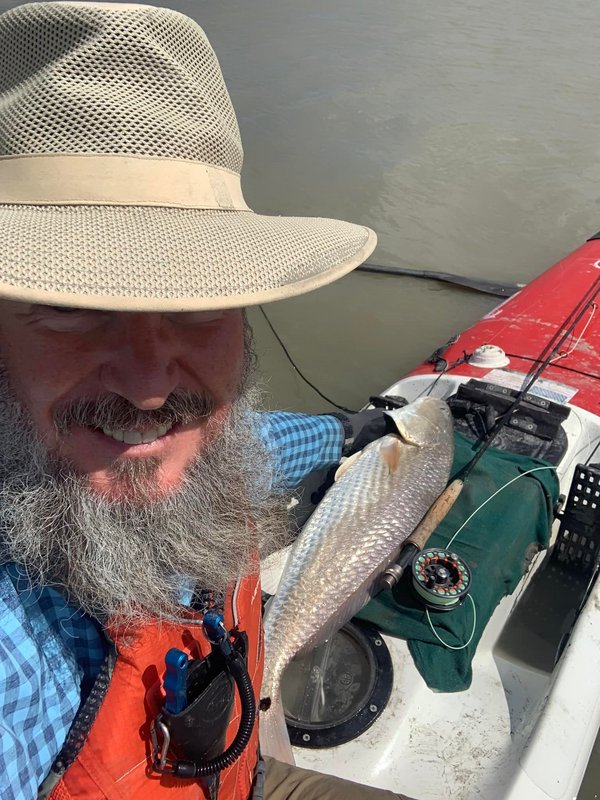 What an excellent report. I'm not a fly fisherman but I sure felt like one reading your report. And I could almost smell the salt and the muddy water watching the bronze and silver backs breaking the surface with you.

Thanks making my day a little better, even if there is just a touch of jealousy mixed in now.
Top

I agree with Watson that your fishing report allowed us to vicariously enjoy the Redfish action described. Am glad you could entice bites in that muddy water. Your sparkly flies work well. Now I want to go fishing.

Man, I love the mud.
Top

What kayak are you using? That’s a lot of miles!
Top